ABC Comes to Democrats' Defense Over Comey: They Didn't 'Want Him Fired!' 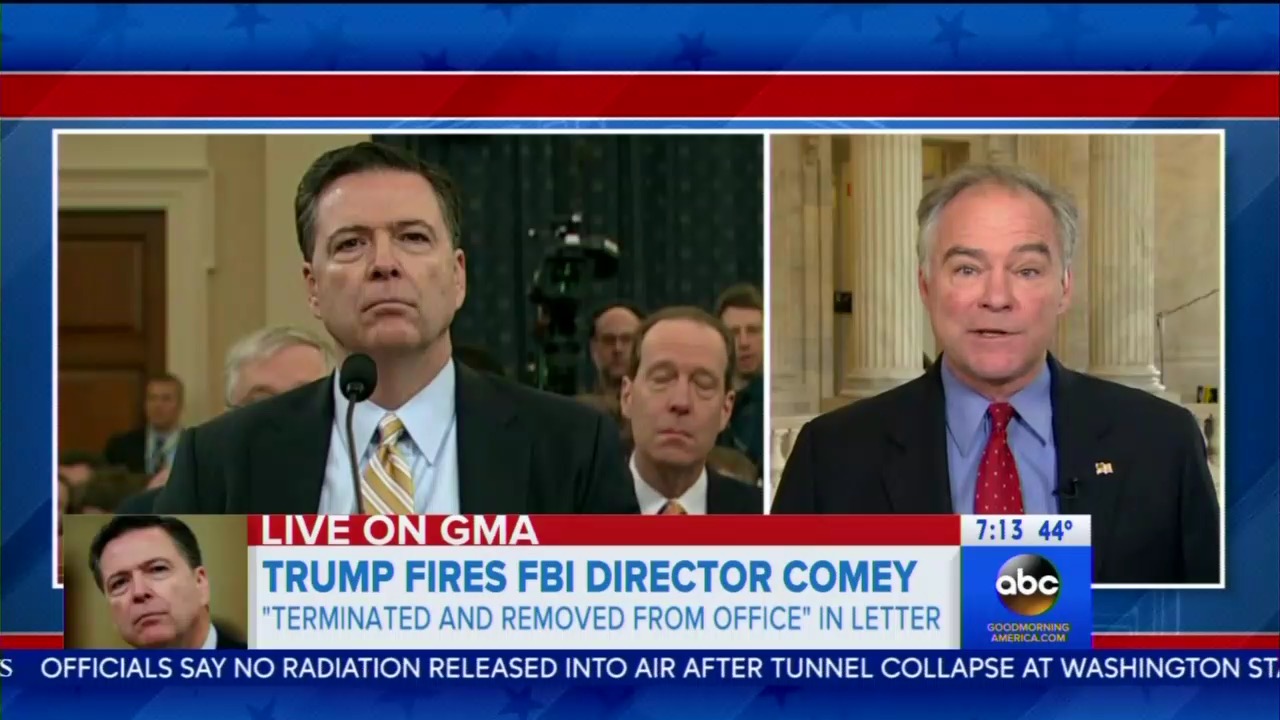 The Democrats are in an uproar after President Trump, under advisement from the DOJ, fired FBI Director James Comey Tuesday night, calling the surprise firing an obstruction of the FBI’s investigation into Trump’s ties to Russia. Yet, the same party called for Comey to be fired back in October, when he was investigating Hillary Clinton’s emails.

But instead of calling out the Democrats for the flip-flop, ABC came to their defense over conservative criticism that the party wanted Comey to be fired just a few months ago.

Wednesday on Good Morning America, ABC invited Democratic Senator Tim Kaine (Va.), Clinton’s former running mate, as their first guest to bash Trump for the decision. Midway through the interview, anchor George Stephanopoulos does bring up that the Justice Department “echoed” many of the same criticisms of Comey that “you, and other Democrats have made,” asking if then Comey’s firing was “justified.” Kaine responded:

KAINE: Look, I have been critical of Jim Comey. But that’s why the FBI Director gets a ten year term. I didn’t say he should be fired.

Afterwards, co-anchor Robin Roberts noted that while Democrats did criticize Comey during Clinton’s FBI Investigation, that “didn’t mean they wanted him fired.”

The Democrats have said they’ve been critical of him, as Tim Kaine said, but didn’t mean they wanted him fired.

This is a blatant lie. Many prominent Democrats came out in recent months charging Comey of committing a crime and calling for his firing outright. Here are just a few examples:

"Maybe he's not in the right job," House Minority Leader Nancy Pelosi told CNN, Nov. 2. "I think that we have to just get through this election and just see what the casualties are along the way."

When asked by MSNBC in December if Comey should resign, Senate Minority Leader Harry Reid responded, “Of course, yes.” Reid also called Comey a “Republican operative,” and wrote a letter accusing him of breaking the Hatch Act, essentially saying he broke the law and should be fired.

"I called on FBI Director James Comey to resign his position after his recent communication with members of Congress regarding the bureau's review of emails potentially related to Hillary Clinton's personal email server.” -Rep Steve Cohen (D-Tenn) told The Hill, November 3.

During a briefing on Russian hacking in January, Democrats angrily stormed out, but not before placing blame on Comey.

“The FBI director has no credibility,” stated Rep. Maxine Waters.

“My confidence in the FBI director’s ability to lead this agency has been shaken,” said Rep. Hank Johnson of Georgia.

“I do not have confidence in him any longer,” Chuck Schumer told Bloomberg, November 2nd, calling Comey’s decision to reopen the investigation “appalling.”

And of course, these same Democrats are now demanding justice for Comey, accusing Trump of an “abuse” of power, when, if Clinton had won the election, they would’ve still been calling for his firing.

The networks themselves also promoted the Democrat spin when they were taking the opposite position on Comey.  By a ratio of three to one, the networks ran negative coverage of Comey, touting Democrat complaints about him and accusations that he broke the law.