Clinton: ‘Not Too Late’ to Avoid Dystopia If We Defend ‘Moral Issue’ Of Our Time, Abortion 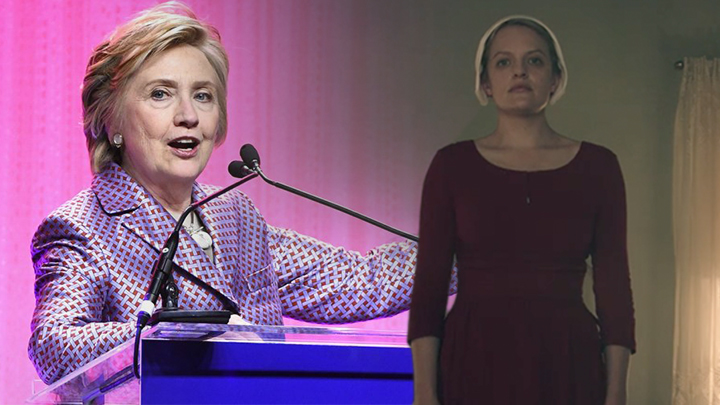 Hillary Clinton is using her time in the spotlight again to make headlines, after coming “out of the woods” yesterday to continue stubbornly blaming everyone but herself for her election loss. She continued to make more ridiculous accusations last night at Planned Parenthood’s 100 year anniversary gala, where she was honored with the “Champion of the Century” award. Always trying to be relevant, Clinton brought up the Hulu series The Handmaid’s Tale and warned that the dystopian future was “not far off” for America.

In her acceptance speech, Clinton called defending abortion “an issue of morality” that she was taking the “higher ground” on. This statement earned her a standing ovation from the Hollywood A-listers in attendance including Meryl Streep, Julianne Moore, Scarlett Johansson, Chelsea Handler and Harvey Weinstein, according to The Hollywood Reporter.

Right off the bat, Clinton brought up the feminist novel and television series as a relevant and timely “conversation” to be having right now in America. She warned that in the fictional drama “women’s rights are gradually and slowly stripped away,” and that was something that America was facing right now:

What a time it is to be holding this centennial. Just ask those who’ve been watching The Handmaid’s Tale, a book I read and was captivated by years ago. Now I’m not suggesting that this future is around the corner but this show has prompted important conversations about women’s rights and autonomy. In a Handmaid’s Tale, women’s rights are gradually, slowly stripped away. As one character says, ‘We didn’t look up from our phones until it was too late.’ It is not too late for us. But we have to encourage the millions of women and men who support Planned Parenthood’s mission, to keep fighting. And to paraphrase Margaret Atwood, we can never let them write us down. Progress is never fully won, it has to be renewed generation after generation. And we stand on the shoulders of the women and men who came before us, and march alongside young activists who are leading the way forward. Some of you have heard me say that I have this new mantra that I--that popped into my head during my long walks in the woods, [laughter] I highly recommend long walks in the woods. It is far healthier than screaming at your television set. [laughter and applause]  And so, just remember, four words: Resist, insist, persist, enlist.

THR’s Ashlee Lee tweeted out video of Clinton’s speech you can watch here:

at Planned Parenthood gala, Hillary Clinton mentions #HandmaidsTale as cautionary: "It's not too late for us." pic.twitter.com/acDCBNO122