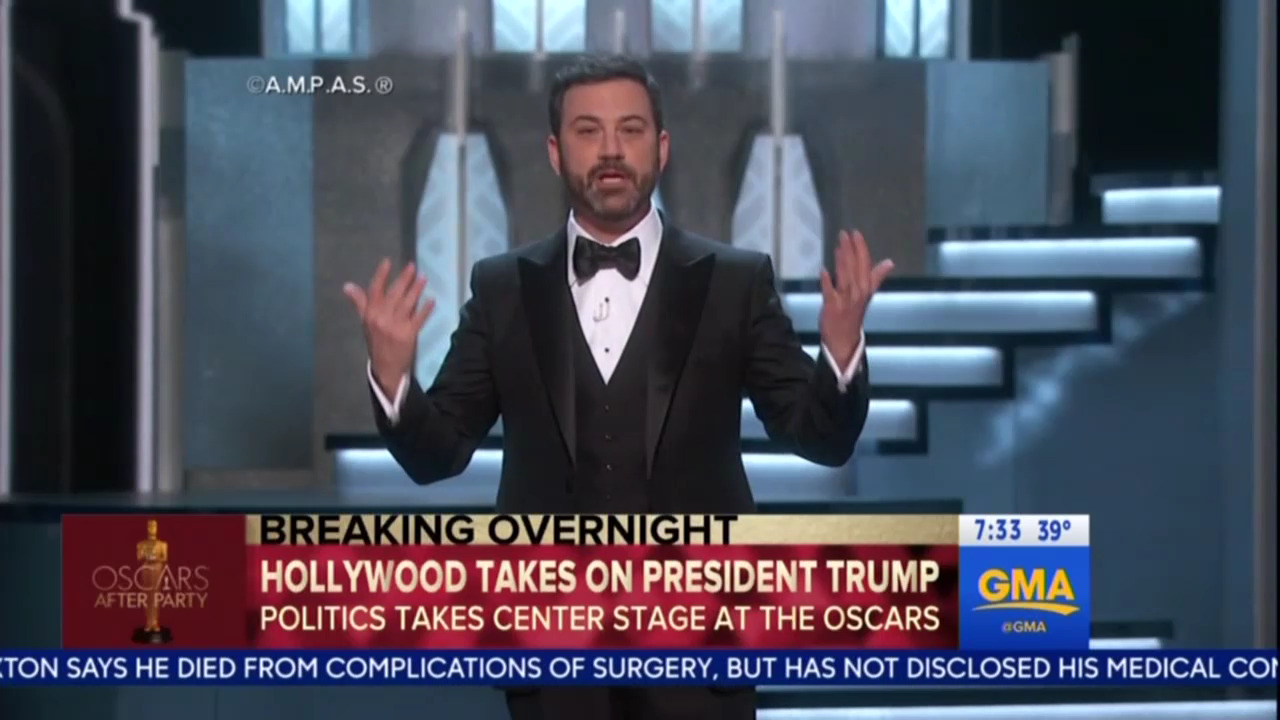 The Monday morning following the Oscars on ABC was filled with excited reports on the biggest Hollywood awards show of the year. But over on ABC’s Good Morning America, the news team seemed just as excited about the anti-Trump tone of the night.

Anchor George Stephanopoulos began by gushing about the “stars” taking “their digs” at President Trump, as the “highlights” of the night.

STEPHANOPOULOS: A lot of other stars took their digs at President Trump. Our chief national correspondent Tom llamas has all the highlights from Hollywood. Good morning, Tom.

Correspondent Tom Llamas began his report calling Trump the “elephant in the room.”

TOM LLAMAS: George, good morning to you. There was a moment there when maybe Warren Beatty drew more ire than President Trump from that Hollywood crowd but at first the president was clearly the elephant in the room.

ABC then played several sound bites of host Jimmy Kimmel’s anti-Trump jokes, which mocked Trump for being racist, petty, and causing the rest of the world to “hate us.” ABC also touted celebrities’ political speeches against the immigration ban and pins supporting liberal causes like the ACLU. Llamas even noting how many retweets Kimmel’s anti-Trump tweets received.

LLAMAS: Kimmel even tweeting at the president first asking, ‘Hey, real Donald Trump, you up?’Then ‘#MerylSaysHi’ both retweeting half a million times and counting the first becoming Kimmel's most retweeted ever just after 15 minutes.

Llamas ended his report by praising the host for “setting the tone” for the night with his “very funny jokes,” to which Stephanopoulos agreed.

LLAMAS: Some credit Jimmy Kimmel for setting the tone and disarming the tension with some of those very funny jokes, George.

STEPHANOPOULOS: They were funny, okay, Tom, thanks very much.

To follow up that gushy report, George Stephanopoulos brought on analyst Matthew Dowd to congratulate Kimmel some more for his hosting and for Hollywood’s “opposition” to the president.

Stephanopoulos opened by noting there was “some fairly sharp barbs” but also “restraint” and “compassion,” from the awards stage. Dowd agreed that it was “more funny than biting.” He went on to say that Hollywood’s “opposition” wasn’t “bitter” or “hateful.”

DOWD: Yeah, I thought actually it was more -- oh, I thought it was more funny than biting George and thought there was a great moment when Mark Rylance gave that speech about the supporting actress when he said let's oppose without hatred. That sort of framed the night. It was opposition to Donald Trump but it wasn't bitter and hateful.

After noting the Best Picture award mix-up, Dowd said Trump could “learn” from Hollywood’s example of admitting when they’d made a mistake.

DOWD: [T]he producers of La La Land were so gracious in what they did and then Price Waterhouse Cooper unlike many leadership, especially in Washington, embraced the moment and took accountability for it so I thought it was actually a good lesson when mistakes are made.