Cuomo Badgers Blackburn: Can You Be for Clean Air, Water If You Don’t Believe In Global Warming?

You can’t make this stuff up. On Friday morning’s New Day, CNN anchor Chris Cuomo badgered Rep. Marsha Blackburn over defending Trump’s conservative pick for the head of the EPA by asking her, “Can you be for clean air and water if you do not believe that man has a hand in global warming?” 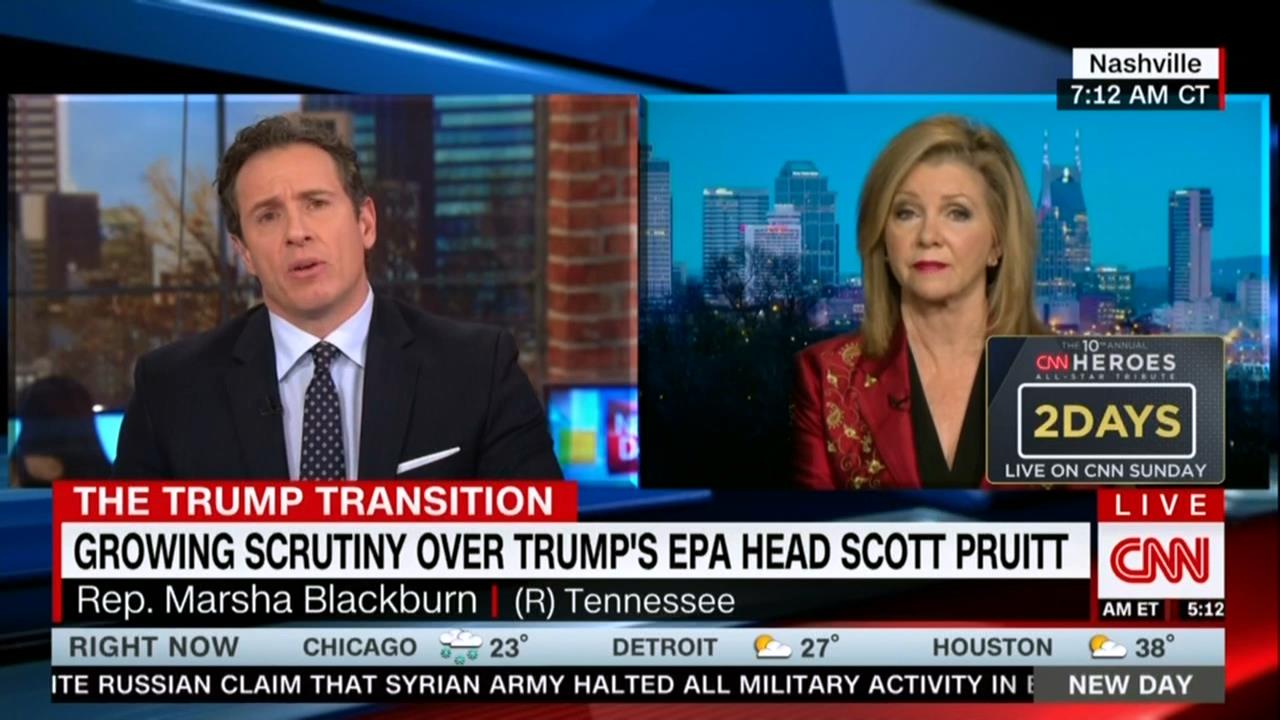 After blasting Blackburn about Trump’s role in the White House, Cuomo changed topics mid-interview to ask Blackburn what she thought about Scott Pruitt, Trump’s pick for head of the EPA. Cuomo, like the rest of the media, has been on a witchhunt against Pruitt since the moment he was announced, because he isn’t a radical environmentalist like they would’ve hoped to head the EPA.

After Cuomo’s incredibly stupid analysis on Pruitt and climate change skeptics Thursday, Friday’s show revealed he hasn’t learned that much. Cuomo pressured Black to “reassure” people that Pruitt “will not be someone who denies that basic science.”

CUOMO: So a couple of questions about the candidate. In terms of the recent EPA pick, the concern is that the Attorney General from Oklahoma is a denier of some of the science behind global warming. What do you know about Pruitt and how can you reassure people who believe that it is scientific fact that man has a hand in the effects of global warming, that Scott Pruitt, as the EPA administrator, will not be someone who denies that basic science.

Blackburn argued that Pruitt understood the burdensome regulations the EPA had put on businesses in his state, and actually cared about how that affected their economy. She shared a conversation she had between herself and an EPA administrator that revealed how big government doesn’t consider the impact of the excessive regulations they put on industries.

BLACKBURN: First and foremost, Scott Pruitt has respect for the rule of law. And he understands, also, the heavy burden that the EPA, by getting outside of their wheelhouse and past their mission, the burden that they have put on businesses. You know, at one point in a hearing, when we were doing our oversight work for the EPA, I asked the administrator about cost benefit analysis. And her response to me was they didn't do cost benefit analysis, because they were interested in the end product. Now, that tells us a couple of things, Chris. They weren't interested in the impact it was going to have on business. Now, we are all for clean air, we're all for clean water. We are all for efficiencies when it comes to electric power generation.

Here, Cuomo could have followed up with any number of thoughtful questions to what Blackburn said. Instead, he went with this hyperbolic question:

CUOMO: Can you be for clean air and water if you do not believe that man has a hand in global warming?

Most people would’ve laughed at the absurdity of Cuomo’s question but Blackburn kept her cool, despite the continued grilling from Cuomo.

BLACKBURN: Of course, you can. Of course you can be a believer in clean air and clean water. And realize that when you look at global warming or are climate change, as it is now popularly called, that it is cyclical. And you have to look at it in terms of centuries, not in terms of decades. And the science around that is not a settled science.

CUOMO: But the predictions you're talking about. I'm asking about something that you haven't addressed yet, which is the idea that our activities contribute greatly to what is warming our planet over time. Do you accept that?

CUOMO: It's not "some," though, Congressman. You know that it's an overwhelming scientific consensus on the notion of whether or not man-made activities negatively impact global warming --

CUOMO:-- It's not an open debate within the scientific movement. It's a big majority and a small group of people that resist it. On that level. Not the predictions, not the cycles, not what to do about it, those are all very debatable. I'm talking about the basic science. The last word on this?

BLACKBURN: The fact is that there is still debate about that. And the participation of human beings in this. We all will agree that we want the Earth to stay healthy. We all want clean air, we want clean water. We also want productivity and we want to make certain that efficiencies in our electric grid are realized and we want to make certain that we are able to have the energy that is necessary to fuel a productive economy.