Networks Give Kaine Chance to Boost Hillary and Blast Trump, But Grill Pence 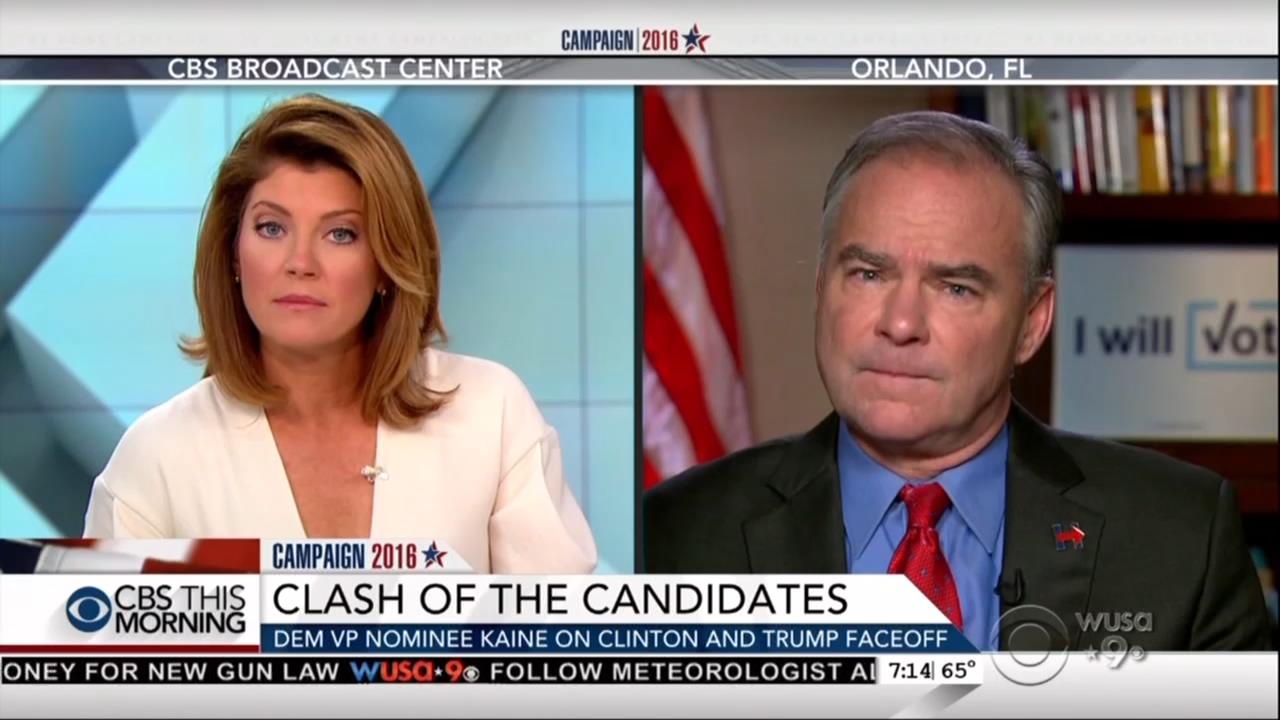 While many conservatives are criticizing moderator Lester Holt for not asking Clinton about several of her scandals during last night’s debate, the morning shows took the same softball approach to her running mate, Tim Kaine on Tuesday morning. Each interview began by asking Kaine what he thought about the debate last night. ABC’s Good Morning America anchor Robin Roberts and CBS This Morning anchor Gayle King both invited Kaine to gush over Hillary’s “best moment” during the debate.

ROBERTS: I asked him what he thought was her best moment last night.

KING: What do you think was her best moment?

KING: Have you had a chance to talk to her after the debate? Did you get a chance with her?...What did she say?

The morning shows also let the Democrat essentially explain how their candidate won the debate, while reminding the Republican how his candidate answered questions poorly.

MATT LAUER: Senator, both you and Secretary Clinton have, over the course of the last quite long period of time, said that you don't believe Donald Trump has the temperament to be president and commander-in-chief. Talk to me about his temperament last night. What did you see that either bolsters your claim or shakes it?

LAUER: [I]f you were a millennial and you were watching last night and perhaps you've been toying with the idea of voting for a third party candidate because you want some sort of change to be brought into the process, did Hillary Clinton say anything last night that you think would sway them in her direction?

CHARLIE ROSE: The two candidates went into this debate dead even. Now this morning, the morning after, did it change anything in perceptions or will it have a likely impact on the polls?

ROSE: When you look at the idea of trust, which was an issue for her, did that change? Did she do anything to assure those people who had questions of trust? And how did she do it in your judgment?

Finally, CBS and ABC gave Kaine an opportunity to continue to bash Trump over his “racist” history, a claim Clinton made during the debate last night. NBC instead chose to grill Pence about it.

ROBERTS: And Secretary Clinton did push him further than she ever has over his comments about racism and America. Do you think that will resonate with voters?

NORAH O’DONNELL: In fact, Senator, in Secretary Clinton's response on that very issue, the birther issue. She used the word "racist" three times to describe Donald Trump. She said, “He has a long record of engaging in racist behavior. Do you believe he's a racist?

Among the softballs there was one or two neutral questions.. After acknowledging Trump was right, NBC’s Savannah Guthrie asked Kaine to “explain” why Clinton didn’t respond to Trump’s claim that her staff pleaded the fifth to get out of being criminally prosecuted on her e-mail scandal.

SAVANNAH GUTHRIE: Senator, we just discussed, she was asked about the e-mails, she tried to dispatch with that question rather quickly. But Donald Trump did point out correctly that several of her staffers were given Fifth Amendment immunity against criminal prosecution as part of this investigation. She didn't take it on. She didn't explain it. Can you explain that?...But on that immunity issue?