Carville: If You Try to Stop Clinton Foundation You're 'Going to Hell,' 'Sending Kids to 'Die'

On MSNBC’s Morning Joe today, longtime DNC Strategist James Carville defended the Clinton Foundation’s dealings and suggested that its humanitarian aid should outweigh any legal or political corruption the Clintons were involved in. “What the Clinton Foundation does is take money from rich people and give it to poor people. Most people think that’s a pretty good idea,” Carville began. He then claimed that children would “die” and someone was “going to hell” for attacking the Clinton Foundation, which host Joe Scarborough called total “B.S.”

After being asked if the Clinton Foundation should’ve refused foreign money from the start, Carville responded:

JAMES CARVILLE: As a political adviser, of course. As a human being, I'm not sure. 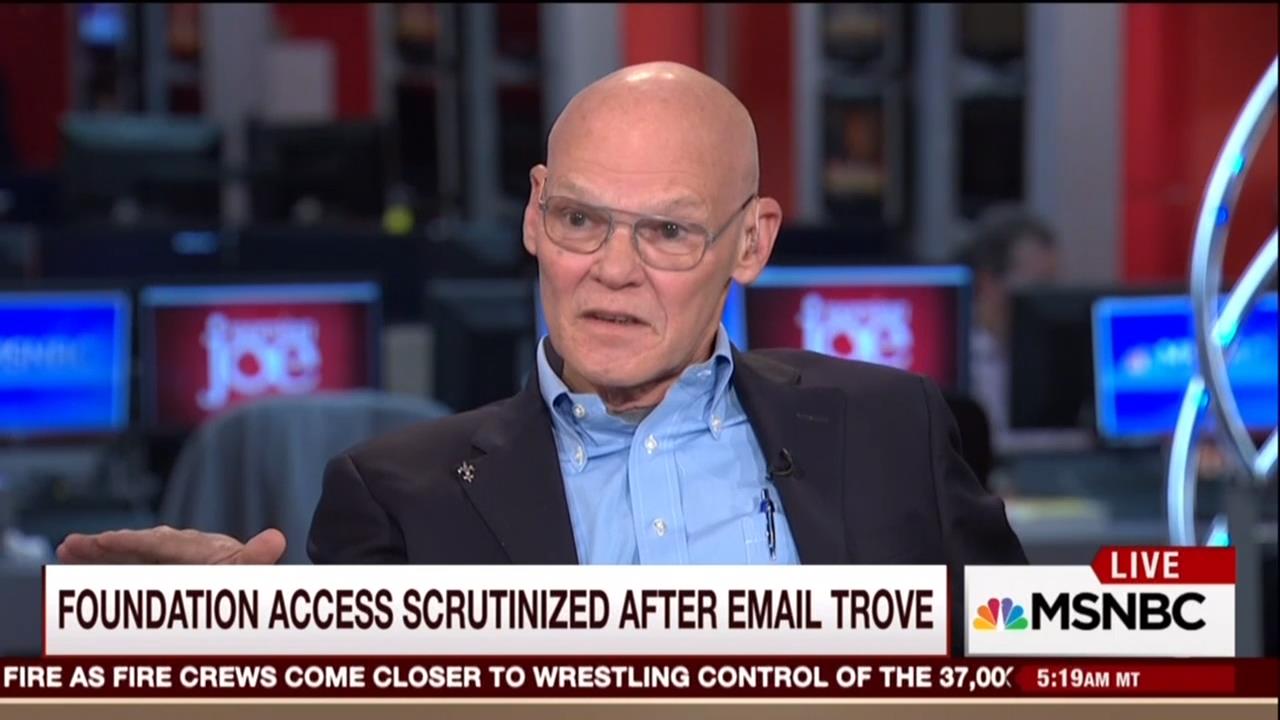 He continued by arguing that it was morally reprehensible to interfere with the Clinton Foundation’s operations and that “somebody is going to hell over this.”

CARVILLE: As a human being I think the foundation does an enormous amount of good. From a strictly political standpoint, if my sixth grade teacher [indiscernible name] says it's right, somebody is going to hell over this. Because somebody, understand here, or somewhere, this is saving people's lives. There's nothing -- I think--again -- I’m very proud of it.

SCARBOROUGH: I wish I could say the word I want to say. I'll just say that's B.S. The fact is if it's a great charity and its a five-star rated charity, guess what, other people can raise the money. It doesn't have to be Bill Clinton calling somebody up making people think, if you know what, if I give him money it could help me out.

Scarborough continued, saying that other people could raise money for the foundation and children won’t “die across the planet” if the Clintons remove themselves from the equation while Hillary is running for President.

SCARBOROUGH: If it's a great charity it can stand on its own and other people can raise money for it. It's not a zero-sum game. It's not having Bill Clinton raise money while his wife is running for president or else we're all going to hell and little kids are going to die across the planet.

CARVILLE: They’re gonna!  But the other thing is, and this I do know, Bill Clinton has more charm and people around the world have an enormous amount of faith in him. I've traveled with him. I've seen it myself. There’s not many people have the relationships and held in affection around the world like Bill Clinton.

CARVILLE: The press has decided that we're going to go after this and shut it down. You are probably going to be successful. There will be people that are going to die because of this.