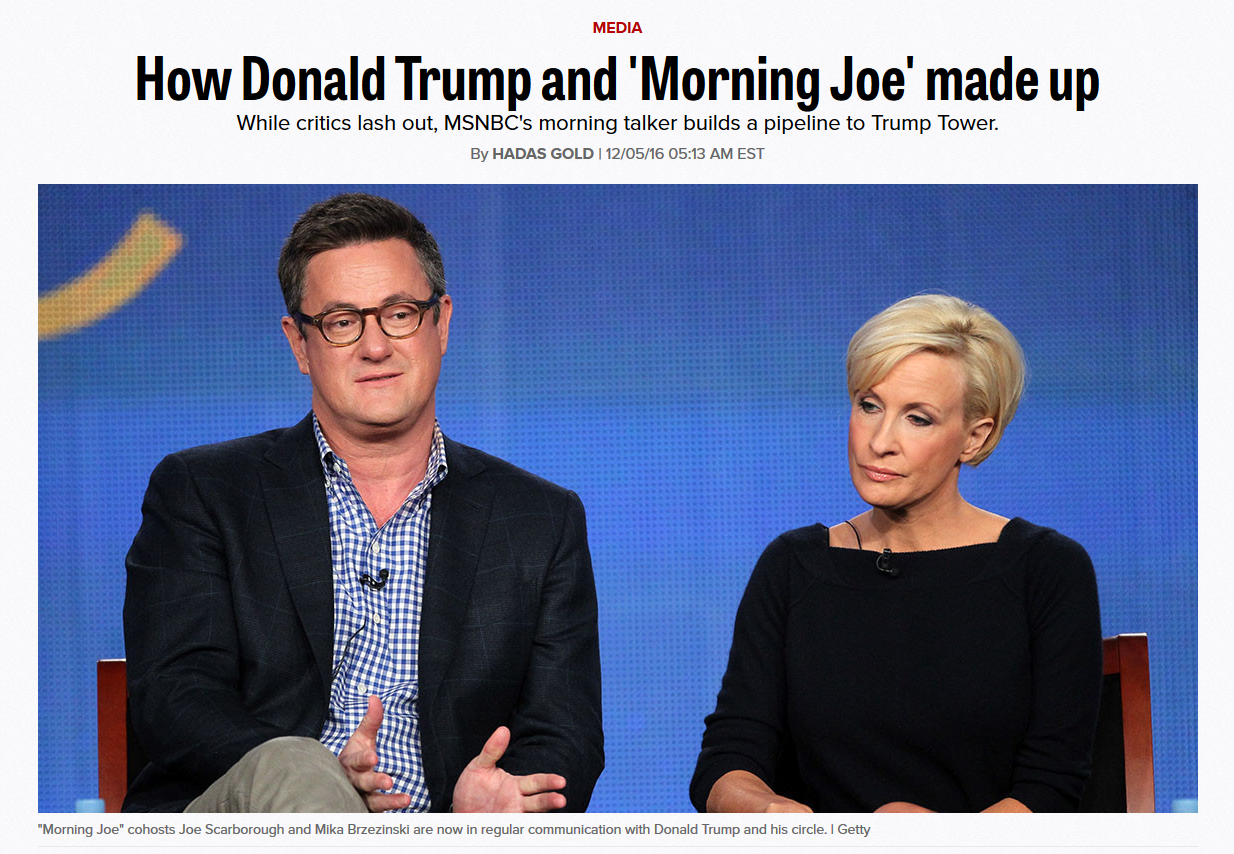 CNN anchor Chris Cuomo apparently isn’t fond of his MSNBC rivals. The New Day anchor had tweeted his unhappiness over Morning Joe's access to the President-elect, complaining, “They have always been boosters. Things turned south when Trump froze them out but coverage always stilted. They are transition spokesmen now.”

Politico highlighted the tweet in a new story by Hadas Gold on 'How Donald Trump and Morning Joe made up.' Gold asserted:

Now, in the wake of Trump’s election, Morning Joe is becoming a go-to site for Trump watchers…it’s a symbiotic relationship…Scarborough and Brzezinski need the access to Trump and his inner circle to break news, provide analysis and exert influence and Trump, preparing to enter a city where most establishment types rejected him, needs the pair for their audience.

This was all in response presumably to Scarborough admitting on air, that he was acting as an unofficial adviser to the President-elect:

We talk to Trump a few times a week and say the same thing to him on the phone that we say publicly on the show… We're just as blunt in person as we are on TV, whether we happened to be critical on the show that particular day or not.

Of course, before Scarborough was criticized for ‘building a pipeline to Trump Tower’ in the aftermath of the 2016 election, there were rough relations between himself and the GOP nominee. The two co-hosts had trashed Trump repeatedly on their show, even though the businessman made regular appearances. In response, Trump called their show "low-rated."

However things changed after Trump had privately reached out to the talk show host in response to a personal family incident, as Scarborough recalled: “We had a nice personal conversation on the phone and he just said none of this [politics] matters. That was the first time we spoke in a long time and that probably made it easier for us to start talking later on."

While it is perhaps fair for CNN’s talk show host to criticize Morning Joe, it is also quite hypocritical for him to call out one of the only liberal talk show hosts who, despite denouncing Trump, saw a path for his victory, while most of the mainstream media particularly on CNN and MSNBC, did not. Instead, they openly broadcasted their support for Clinton, so much that their delusional poll predictions actually harmed rather than helped their candidate in the end.

Scarborough responded his colleagues’ criticism on his show and his statement appears in the article:

Mika, Mark Halperin and I understand the resentment from some who were blind to the realities that shaped the 2016 election…I understand why they are embarrassed and striking out at us. I guess we were about the only media figures to both aggressively attack Trump while predicting the possibility of his win. By election week, the media bias became so pronounced that merely suggesting Trump could win got us labeled by out of touch analysts as lap dogs. We were right. They were wrong.