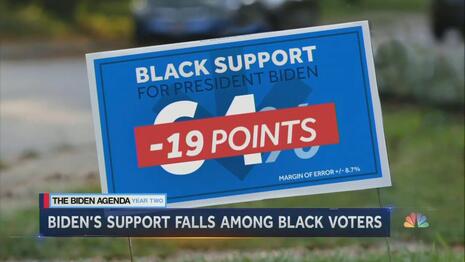 As he did earlier in the show, Holt reported on "Biden's challenges as he begins his second year in office." Holt added that among these challenges is Biden's "falling support among black voters who lifted his once struggling campaign." Holt then handed the segment off to Welker for her report from South Carolina.

The first black Biden voter Welker interviewed was "Helen Bradley, one of President Biden's most fervent supporters telling us she is disappointed." Welker asked her if she thought that "President Biden has fought hard enough for the priorities of black voters?" Bradley didn't beat around the bush, she answered  "I do not."

Bradley believes Biden didn't fight hard enough for the so-called "voting rights" bill. However, she didn't just criticize Biden from the left. Like most Americans, she is deeply concerned with skyrocketing inflation. She told Welker "when you go to the grocery store, you find things three and four times higher than it used to be. But our paychecks are not three and four times higher."

Welker also interviewed two other South Carolina voters, Langston Brooks and Fletcher Smith. Brooks, like Bradley, was also concerned with the rising cost of goods. While Smith was more concerned about Biden's failure to reach out to black voters in South Carolina and the country at large.

Welker then reported on the devastating NBC poll admitting Biden's crumbling support among black voters is "not just in South Carolina. Our NBC News poll shows black support for President Biden has dropped 19 points since April. Now it's down to 64 percent."

Once again, credit where it is due, NBC could've spiked the poll and ran a segment on another topic. Instead, they told their viewers the truth.

To read the transcript of this segment click "expand":

LESTER HOLT: Back now with President Biden's challenges as he begins his second year in office. Among them falling support among black voters who lifted his once struggling campaign. Our Kristen Welker traveling to South Carolina to ask, has the President kept his promises?

KRISTEN WELKER:  It was the state that saved Joe Biden's presidential campaign.

WELKER: South Carolina's black Democratic voters turning out in force to help him win the primary and ultimately the White House. One year later, we went back to see what those voters are thinking now. Helen Bradley, one of President Biden's most fervent supporters telling us she is disappointed. Do you think that President Biden has fought hard enough for the priorities of black voters?

HELEN BRADLEY: I do not.

WELKER: Bradley, a trustee at her church just outside of Columbia says her top priority is Democrat’s voting rights legislation, which was defeated this week. She blames President Biden for not pushing for it earlier.

BRADLEY: Our ancestors fought hard, long and hard to get these rights for us, and for them to be taken away would be detrimental.

WELKER: Bradley praises the President's handling of COVID, but not the economy.

WELKER: Langston Brooks is also worried about soaring prices. What grade would you give President Biden?

LANGSTON BROOKS: Imma say a B minus as of right now.

WELKER: Ok, so he has room for improvement.

FLETCHER SMITH: We will continue to be with him, but he needs to be with us walking side by side, not behind us, not necessarily in front of us. But side by side as Martin Luther King did.

WELKER: It’s not just in South Carolina. Our NBC News poll shows black support for President Biden has dropped 19 points since April. Now it's down to 64%.

WELKER: What do you say to these black voters who say that you do not have their backs as you promised on the campaign trail.

CONGRESSMAN JAMES CLYBURN: He was elected to a four-year team. And he's been in office for one year. I think it’s a little bit not necessarily disrespectful to expect that everything that he laid out is going to be completed in your first year of your term.

WELKER: So will these voters give the President more time?

SMITH: I will never turn my back on Joe Biden.

BRADLEY: He has to show me a little more, so I don't really wanna commit to that at this point.