"These days, journalists don’t retire, they just join the Obama administration," quipped Ben Jacobs of the Daily Beast in his September 13 post, "From Rick Stengel to David Axelrod, All of the President’s Journalists."

But rather than see a problem with the liberal media-Democratic administration revolving door, Jacobs's story was decidedly matter-of-fact. Indeed, he portrayed it more as the president "reaching out to journalists" rather than servile liberal scribes clamoring to jump aboard the Obama train and being received happily by the administration. What's more, as an excuse that "both sides do it," Jacobs closed by noting that the late Tony Snow is an example of the politics-journalism revolving door being a centuries-old bipartisan tradition:

Yet hiring journalists isn’t an Obama innovation. Abraham Lincoln’s private secretary, John Nicolay, had been editor of the Pike County Free Press in Pittsfield, Illinois. Even George W. Bush’s administration hired former journalists. Tony Snow, the third of Bush’s four White House press secretaries, was a longtime editorial writer, columnist, and talk-radio personality as well as the first host of Fox News Sunday before he joined the Bush administration in 2006. Snow, fighting cancer, left the White House in September 2007 and passed away in July 2008.

Of course, in the mid-1800s, most newspapers were political party organs, so the Nicolay comparison is suspect. And Snow's journalistic work prior to the Bush administration was largely editorial in nature, excepting of course Fox News Sunday. What's more, the fact that Jacobs could only point to one major journalist having joined the Bush administration -- compared to "at least 15 journalists," six of which he profiled -- speaks volumes. 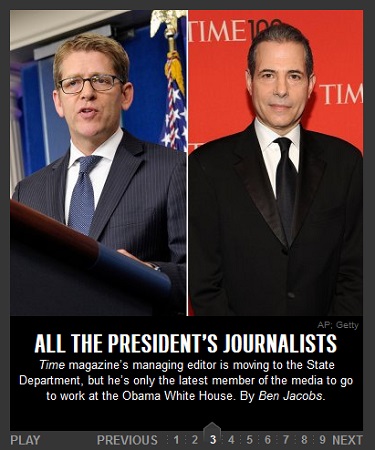