NewsBusters publisher Brent Bozell and Fox News host Sean Hannity kicked off the "Media Mash" segment of the May 16 Hannity with a deliciously ironic clip of Hardball host Chris Matthews lamenting on his Tuesday program that President Obama is surrounded by adoring yes-men who can't bear to tell him bad news, and that that culture of groupthink leaves the president prone to embarrassing scandals. "A little irony there?! I couldn't resist! I had to start with that," Hannity said suppressing laughter. "Okay, a sycophant who's in awe and in love with Barack Obama. Chris Matthews, call your office," Bozell quipped, adding, "This is the man who spits to tell us how much Obama's the perfect man."

"This is a page right out of the Clinton playbook. And Dan Rather knows that playbook as well as anyone," the Media Research Center founder argued. "What you do is you cover, if forced, you cover a Democratic scandal for a couple of days, then you move away from it, as soon as the Democrat response to it, you turn on the Republicans, and you make them the issue, saying they have a sheer political cynical calculation to take advantage of a situation." 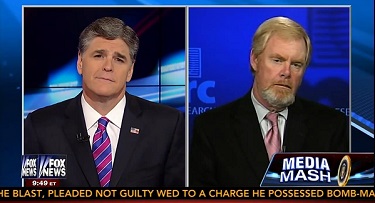 "This is sheer left-wing political activism that Dan Rather is engaging in. It's spin control," Bozell concluded.

The third topic for the May 16 "Media Mash" was CNN's Don Lemon spinning for the Obama administration that the Benghazi talking points revision was not a case of trying to downplay or dismiss a terrorist attack but rather to "control the message," which every presidential administration seeks to do.

"This is more spin control," the MRC president insisted, "And if it is as easy as he's saying, then why did Carney lie over and over again to the press about it?"

Also on the topic of Benghazi, CBS's Sharyl Attkisson and her work pursuing the story, a rarity among the broadcast media, was discussed. "I've got to give her props....She's a rare voice in the mainstream media," Hannity noted.

"[S]he's a consummate professional,"Bozell agreed, adding that he's worried she may be punished by liberal network executives for her dogged pursuit of story damaging to the Obama administration. "They're already starting to kneecap her for having covered this story."