"It seems to me" that the Associated Press's newly announced plan to scrub "illegal immigrant" from its Stylebook is "an attempt to control the language... it's a form of political correctness," argued substitute host Stuart Varney on the April 3 Your World with Neil Cavuto. "You can subtly affect your coverage and your thinking about the issue" by "softening the language," noted Varney, who himself is a legal immigrant to the United States from the United Kingdom.

Yes, agreed Varney's guest, NewsBusters senior editor Tim Graham as, "it's a form of political correctness over factual correctness." Graham noted that the Associated Press and New York Times had long held the line on keeping "illegal immigrant" over the nonsensical "undocumented immigrant" alternative, that lobbying by pro-amnesty groups, as well as liberal minority journalism groups pushed the AP to make a politically calculated decision:

Now, the AP says in its Stylebook entry that it's not going to use "undocumented" so much but that's the lingo that we've seen to replace "illegal immigrants." 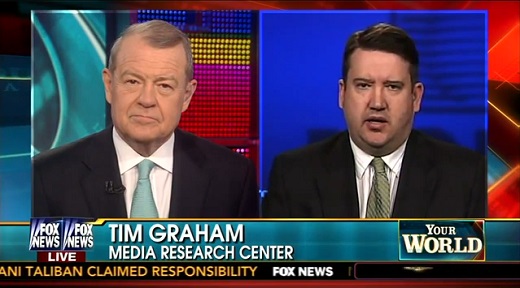 Also discussed was the puzzling, and possibly politically-motivated move by NBC to shove aside Jay Leno from the Tonight Show -- despite the fact that he does well in the ratings -- and replace him with Late Night host Jimmy Fallon.

"Comcast has become one of the most politically correct corporations in the United States and their support of Obama has been dramatic," Graham noted. What's more, Fallon's has been "one of the most Obama-friendly zones" on television, with the SNL alum slow-jamming the news with the president and doing a dancing skit with the first lady.

"So, clearly if they're trying to bring that in an hour earl[ier] every night, despite the fact that Leno's got good ratings and Fallon doesn't, how does that not look political?" the MRC director of media analysis argued.