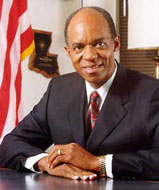 I have to hand it to the AP this time. They actually noted the political party affiliation of another Democrat in legal hot water. So did CNN.com and Reuters.

But for some reason, MSNBC's Pete Williams left out the party affiliation of Louisiana's Rep. William Jefferson (D) in this March 31 item at the First Read blog:

In something of a surprise, the U.S. Supreme Court today declined to hear an appeal involving the FBI's unprecedented search of the Capitol Hill offices of Congressman William Jefferson.

A federal appeals court ruled that the FBI wrongly used its own agents look through the material seized to determine what might be covered by congressional privilege. This is a considerable victory for Jefferson, largely validating his objections to the search and giving him certain bragging rights. But prosecutors claim they have sufficient evidence independent of the search. The cash in his freezer, for example, was found well before Jefferson's offices were searched.

I found it odd that Williams left out Jefferson's party affiliation as he noted last Thursday on the First Read blog that Puerto Rico's indicted governor is an Obama superdelegate.

For the NewsBusters archive of Associated Press bias, check here.

Photo of Rep. Jefferson via uspolitics.about.com.

Update (18:24 EDT): NBC correspondent Pete Williams replied by e-mail explaining why the Democratic affiliation was not noted in the blog post. His note was gracious and gives a bit of insight into how the First Read blog works:

You were right to take me to task for not noting Rep. Jefferson's party affiliation. May I offer a word of explanation? I posted that item you saw to an internal system, which alerts us all to news developments around the world. An editor took the item and posted it on the web, which is fine and fair game, but I didn't write it for external consumption and instead used a bit of shorthand. Had I known it would be posted to the wider world, I'd have included more background about the case, including party affiliation.