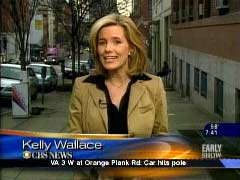 Just as the ladies of "The View" discussed the previous day, "The Early Show" on April 24 harped on a study that allegedly demonstrates a pay gap between men and women. Hannah Storm kicked off the report noting "women’s rights groups have declared today equal pay day." Reporter Kelly Wallace uncritically reported a study conducting by the left leaning American Association of University Women, which supports abortion rights and affirmative action. Wallace fed this information to several unsuspecting New York University female students. Although Wallace briefly mentioned that women are more likely to enter professions with lower pay, she quickly refuted it with the liberal organization’s own study.

The CBS correspondent offered no counterpoint to her story, even though there are some out there. Author Warren Farrell, in his book Why Men Earn More, noted single college-educated males in the same profession, actually earn slightly less than their female counterparts. The entire transcript is below.

KELLY WALLACE: We've come a long way, baby, but not far enough according to a new report by the American Association of University Women. It found that just one year after college, women make 20 percent less than men. Are you surprised?

KIIANA REYES, STUDENT NEW YORK UNIVERSITY: Yes, it is, because we do the same amount of work in school. So it's not acceptable at all.

WALLACE: Maybe men have better grades than women. Not the case. Women, on average, have higher GPA's and still end up making less money. Ten years out, the gap widens, with women making almost 30 percent less than men.

JACQUELINE TKACH, STUDENT NEW YORK UNIVERSITY: I've seen it, like my mom, all my female relatives, they've always had to struggle like that. They're in the same role as men and yet they're still paid less.

WALLACE: Sure, more women than men choose lower paid fields such as teaching or leave the workforce to care for children. But once those factors were taken into account, there was still a gap in pay. 12 percent, according to the report.

CATHERINE HILL, AMERICAN ASSOCIATION OF UNIVERSITY WOMEN: That suggests that something else is going on. It suggests that discrimination may still be a very important problem for women in the workplace. Not only for older women, but also for young women coming into the workforce.

WALLACE: To try and narrow the gap, women say they could improve their negotiating skills and enter male dominated fields which pay more, such as engineering and business. But true pay equity, some women say, won't happen until more women are at the top.