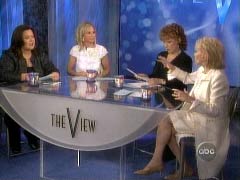 The co-hosts on "The View" discussed the recent reports of the wage gap between men and women. Co-hosts Rosie O’Donnell and Joy Behar wondered why that story is even news. Elisabeth Hasselbeck noted that the gap begins immediately after college despite women’s higher marks in testing.

ROSIE O’DONNELL: And did you hear in the news? They’re reporting this like it's new news, which I think is funny. There is a gender pay gap in America.

ELISABETH HASSELBECK: You know what I didn’t realize thought was right out of college, right at the jump that women are making less than men. I think they said-

HASSELBECK: 20 percent less than men. And they’re also– Which is odd because women said in the same study to test higher in every single major in college. So they’re leaving with higher than all of their male counterparts but yet making 20 percent less.

Although the "wage gap" is true, it does not tell the entire story. The co-hosts failed to mention that women in the same profession as men actually earn slightly more than men. In recent review of Warren Farrell’s book, Why Men Earn More, columnist John Leo noted these statistics.

"Women are 15 times as likely as men to become top executives in major corporations before the age of 40. Never-married, college-educated males who work full time make only 85 percent of what comparable women earn. Female pay exceeds male pay in more than 80 different fields, 39 of them large fields that offer good jobs, like financial analyst, engineering manager, sales engineer, statistician, surveying and mapping technicians, agricultural and food scientists, and aerospace engineers. A female investment banker's starting salary is 116 percent of a male's. Part-time female workers make $1.10 for every $1 earned by part-time males."

Why do men earn more overall? Mainly because they’re more likely to take a job where the market demands higher pay. Leo also noted these statistics.

"Farrell argues that many men outearn women by a willingness to take risky and dangerous jobs as well as work that exposes them to stress and bad weather or that requires a transfer to an undesirable location in another city or country. Women are more likely than men to pick glamorous jobs that tend to pay less. A London School of Economics study tracking 10,000 post-1993 United Kingdom graduates from 30 universities found that males were earning 12 percent more than women. The men tended to stress salary and were more likely to take up engineering, math, and computing. The women were more apt to seek socially oriented jobs and as undergraduates had favored majors in education and the arts."

In fairness, Barbara Walters did briefly mentioned it, but quickly dismissed it as "ridiculous" then implied her disdain for the free market.