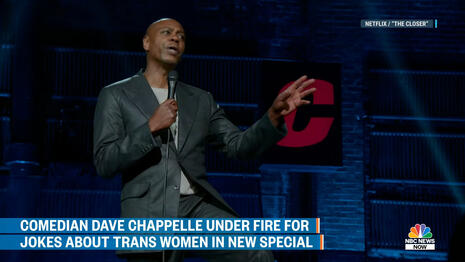 And here we go again with the cancel culture. This time the target is comedian Dave Chappelle and his Netflix special. Here's the headline from NBC News: "Netflix Trans Employees Plan Walkout in Protest of Dave Chappelle Special."

The essence, as described in Variety:

LOS ANGELES - Trans employees and allies at Netflix are planning a walkout on Wednesday, Oct. 20, in protest of co-CEO Ted Sarandos' comments regarding Dave Chappelle's new special, "The Closer," Variety has confirmed.

As reported by The Verge, a leader of the streamer's trans employee resource group wrote the following in a message to members: ‘Trans Lives Matter. Trans Rights Matter. And as an organization, Netflix has continually failed to show deep care in our mission to Entertain the World by repeatedly releasing content that harms the Trans community and continually failing to create content that represents and uplifts Trans content. We can and must do better!’

Netflix's Most Twitter account dedicated to LGBTQ content posted Wednesday, ‘We can't always control what goes on screen. What we can control is what we create here, and the POV we bring to internal conversations.’

Notice that key word from that Twitter posting? That would be "control." Which, of course, is what all cancel culture is about: control.

To his immense credit, Netflix co-CEO Ted Sarandos refused to buckle. He issued this statement:

Chappelle is one of the most popular stand-up comedians today, and we have a long standing deal with him. His last special 'Sticks & Stones,' also controversial, is our most watched, stickiest and most award winning stand-up special to date. As with our other talent, we work hard to support their creative freedom — even though this means there will always be content on Netflix some people believe is harmful.

Then there was this news about the “controversy” as headlined at Breitbart:

Black Transgender Defends Dave Chappelle: ‘No Topic Should Be Off-Limits, the World Has Become Too Censored’

The story reported this: “Black transgender comedian Flame Monroe has stepped out in support of comedian Dave Chappelle amid the leftist outrage over his Netflix special The Closer.”

Speaking with TMZ, Monroe, a biological male who identifies as a woman, said no topic “should be off-limits” and decried the politically correct notion of censoring comedians:

As a comedian, I believe that I don’t want to be censored. I think that nothing is off-limits and I think the social climate right now and the temperament started way back with Norman Lear, who had his finger on the pulse many years ago.

The world has become too censored. There are three dogs that I have in this fight. As a comedian, I don’t want to be censored. As a trans woman, I want equality. And as a black person, I want fair treatment in this country that we have been trying to get for 400 years. So, everything is important to me.

All of this what you can and cannot say is ridiculous. Comedians are put on earth and our safest place on the planet is also on a stage with an audience that’s willing to listen. We say things that other people are afraid to say and we say them hopefully in a funny way so that you use your own mind to do your own critical thinking and think for yourself.

I absolutely do not think that the special should be taken down off of Netflix or anything else for that matter with Netflix.

But there is more going on here than the attempt to silence Chappelle and bully Netflix. This is yet another example of company employees in various communication outlets trying to intimidate their bosses by demanding free speech be silenced.

Recall the resignation of New York Times writer Bari Weiss, who, in her quite public letter of resignation to Times publisher A.G. Sulzberger, said this:

My own forays into Wrongthink have made me the subject of constant bullying by colleagues who disagree with my views. They have called me a Nazi and a racist; I have learned to brush off comments about how I’m “writing about the Jews again.” Several colleagues perceived to be friendly with me were badgered by coworkers. My work and my character are openly demeaned on company-wide Slack channels where masthead editors regularly weigh in. There, some coworkers insist I need to be rooted out if this company is to be a truly “inclusive” one, while others post ax emojis next to my name. Still other New York Times employees publicly smear me as a liar and a bigot on Twitter with no fear that harassing me will be met with appropriate action. They never are.

….What rules that remain at The Times are applied with extreme selectivity. If a person’s ideology is in keeping with the new orthodoxy, they and their work remain unscrutinized. Everyone else lives in fear of the digital thunderdome. Online venom is excused so long as it is directed at the proper targets.

Op-eds that would have easily been published just two years ago would now get an editor or a writer in serious trouble, if not fired. If a piece is perceived as likely to inspire backlash internally or on social media, the editor or writer avoids pitching it.

The Weiss resignation came on the heels of the brouhaha over the paper’s publication of an Op-Ed by Arkansas Republican Senator Tom Cotton titled “Send in the Troops” - in which the Senator (say again that would be a sitting United States Senator) called for using the military to quell the riots that launched in cities across the country after the death of George Floyd.

The staff of The Times went crazy, and demanded - and got - the resignation of Times opinion editor James Bennet. Bennet had - oh the horror! - given the green light to publish the Cotton piece. That resignation was followed by another, that of the actual editor of Cotton’s article, one Adam Rubenstein.

Meanwhile, around the same time, the left-wing Huff Post was headlining this of the Philadelphia Inquirer’s top editor, Stan Wischnowski:

Philadelphia Inquirer Staffers Launch Protest After Paper's 'Buildings Matter, Too' Headline
More than 30 employees of color have called out sick to send management a message about racism.

This was followed very shortly by the inevitable as headlined at Fox Business:

Top Philadelphia Inquirer editor resigns after 'Buildings Matter, Too' headline
'We should not have printed it,' newspaper said last week

At bottom, the thread that connects the latest furor at Netflix over Dave Chappelle to the furies that silenced Times writer Bari Weis, Times editors Bennet and Rubinstein and Inquirer editor Stan Wischnowski is the infection of these organizations with staffers who are in reality leftist totalitarians. Totalitarians with zero regard for the free speech that in fact is what enables their respective institutions do what they were created to do, whether that means producing TV specials and movies (Netflix) or reporting the news of the day and various opinions on that news of the day.

So again. Three cheers for Netflix in standing firmly behind Dave Chappelle. Co-CEO Sarandos is refusing to be bullied into silencing the comedian.

The real problem here is that the fight for free speech, even - especially even - offensive free speech, is raging across America. Giving in and appeasing the bullies, no matter where they show up, is never the answer.