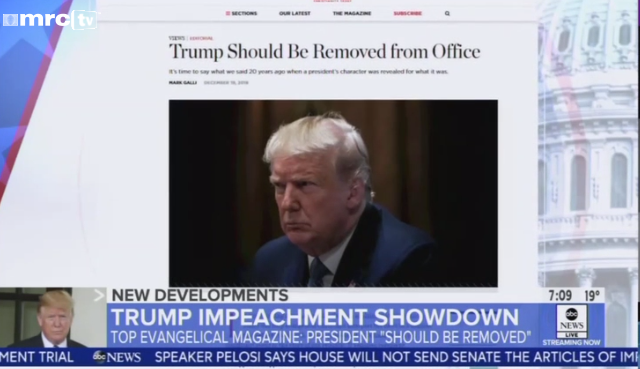 For a small snapshot of the media battles that lie ahead in 2020?

Take this one small example that spread like wildfire over the Christmas holidays.

Six days before Christmas, one Mark Galli, the editor of Christianity Today, an evangelical magazine founded by no less than the late Reverend Billy Graham, penned this editorial.  The headline: "Trump Should Be Removed from Office. It’s time to say what we said 20 years ago when a president’s character was revealed for what it was."

What was striking about the editorial was that it sounded no different than the average anti-Trump/Never-Trump blasts that routinely come from the outlets of the decidedly non-religious Leftist State Media. So, but of course, the editorial was picked up by all manner of LSM outlets. The President, of course, saw and responded. Notably so too did Franklin Graham, the son of CT’s founder Billy Graham, noting that his father had voted for Trump.

And but of course, faster than you can say “Santa Claus”, the editor in question, Napp Nazworth, was in The Washington Post featured on CNN and all manner of Leftist State Media outlets etc etc etc, yada, yada.

The essence? A left-wing editor at, of all places, The Christian Post, resigned because the Post had the nerve to write an editorial responding to the vehemently anti-Trump editorial in Christianity Today attacking President Trump.

Take a look here and see exactly what so offended this editor. The headline: "Christianity Today and the problem with 'Christian Elitism.’"

The editorial, written by John Grano and Richard Land, had the audacity - the audacity! - to say, in part, this:

“What was the spirit animating CT editor Galli’s “thunderbolt” from on high? The answer is likely found in the self-appointed Mount Olympus from which Mr. Galli made his “moral” pronouncement. After Trump’s election, Mr. Galli bluntly confessed:

These words are chillingly similar to former President Barack Obama’s description of rural voters who “cling to their guns and Bibles,” former Secretary of State Hillary Clinton’s characterization of Trump supporters as “deplorables,” and most recently, Beto O’Rourke’s smug threats against biblically orthodox churches and citizens who own a certain type of rifle. These are the words of elitists who look down upon opponents as inferior human beings who need to be controlled, not debated.

That is the toxic emotional and spiritual stew in which the attitude animating Galli’s editorial festered into life.”

In other words? Grano and Land have put their finger exactly on the problem not only with self-professed Christian “elites” but with Leftist State Media elites well outside of Christian media. Those post-2016 Trump election remarks by CT editor Galli are in fact the animating spirit behind the Leftist State Media elites and their endless war against both the President - and, importantly - his supporters.

Indeed, the very first line cited, that “I know hardly anyone, let alone any evangelical Christian who voted for Trump” is nothing if not an eery update of the legendary line attributed to the left-leaning New Yorker film critic Pauline Kael. Astonished at President Richard Nixon’s 49-state landslide re-election in 1972 over the far left Democrat Senator George McGovern, Kael confessed that:

“I live in a rather special world. I only know one person who voted for Nixon. Where they (Nixon voters) are I don't know. They're outside my ken. But sometimes when I'm in a theater I can feel them.”

(This was later and unnecessarily changed to an urban legend that she had said “I can't believe Nixon won. I don't know anyone who voted for him.” Unnecessarily because the actual quote, cited when it appeared in a Kael lecture, certainly conveys the same point.)

Make no mistake. This little dust-up between Christianity Today and The Christian Post is in fact a forerunner of the massive battle that lies ahead in 2020. The elitists of the Leftist State Media are going to be training their fire on the President, his supporters - and without question - conservative media.

And just as with that post-2016 comment from Christianity Today editor Galli, they will be clueless to just how much their rabid anti-Trumpism will prove to be one of the Trump campaigns biggest assets.

In other words, a massive backfire. And by 2020 election day? One suspects Mr. Galli and his colleagues at Christianity Today will have a better understanding of just how many Christian evangelicals support the President - and more importantly, why.