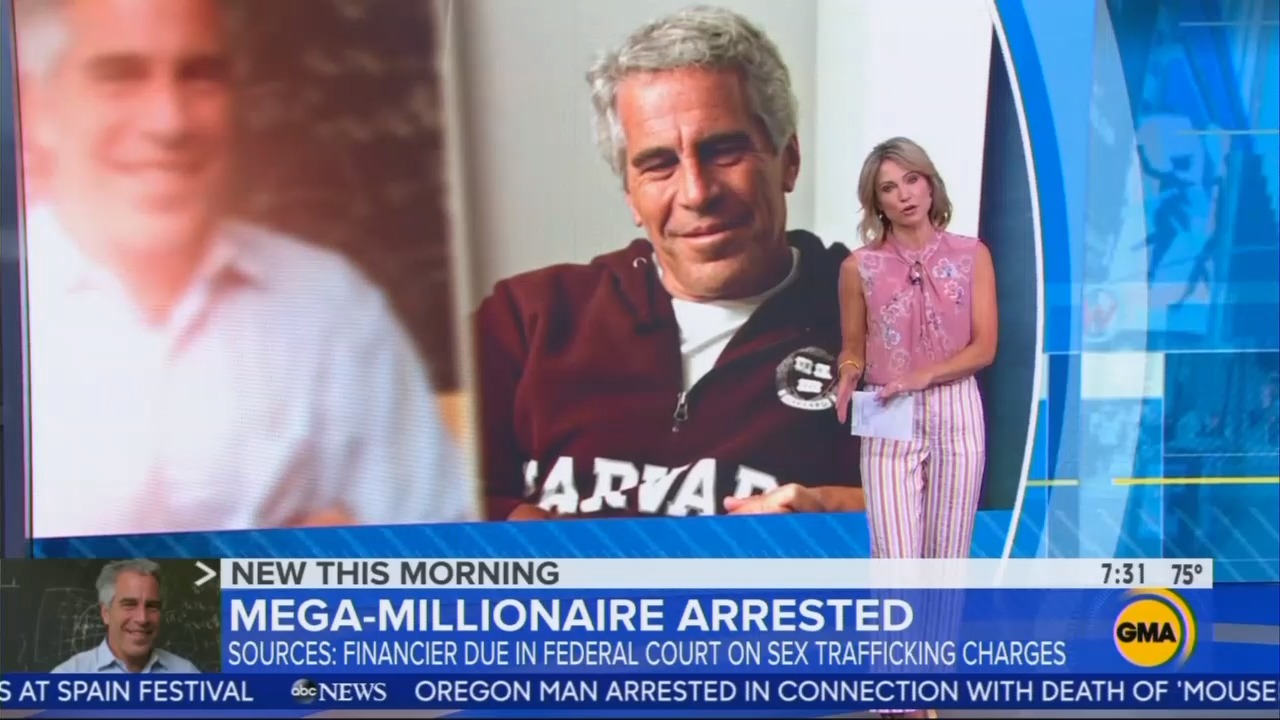 Last week in this space the hypocrisy of ABC News when it came to an internal whistleblower was discussed. I said this:

“And when it comes a whistleblower who blew the whistle on the network’s protection of pedophile Jeffrey Epstein? ABC went out of its way to get another network to fire that suspected whistleblower - in spite of her flat denials.

It doesn’t get more hypocritical than that.”

Now? A week later? Yes indeed, ABC is revealed to have exceeded their previous hypocrisy.

Turn to Emily Smith of The New York Post’s Page Six,who headlined her scoop this way: “ABC scrambles to figure out identity of Amy Robach leaker, who goes by ‘Ignotus.’”

Smith says this in part:

“ABC bigwigs are going potty to find the identity of the leaker behind the Amy Robach tape — after the alleged source posted a letter online slamming the network under the name “Ignotus,” a wizard from the “Harry Potter” franchise.

The source added ABC investigators have been rifling through staff emails and news logs and grilling staffers. The company has been isolating certain employees and putting them under pressure to turn on their colleagues in a bid to find the culprit, the source also claimed, adding that the investigation reports back up to the very highest levels of HR at ABC’s parent company, Disney.

Ignotus isn’t happy with the ABC probe either and under the header, “Why I, alone, released the Amy Robach Epstein tape,” he or she wrote, “I sit right here with you all in complete shock on how this has been handled….[the company] has spun into a mission of seek-and-destroy. Innocent people that have absolutely nothing to do with this are being hunted down as if we are all a sport.”

And over at Fox News is this from Fox media reporter Brian Flood: “The Amy Robach video leaker is all anybody at ABC News can talk about, sources say.”

The Flood story says in part this regarding a report by Fox’s Melissa Francis on Tucker Carlson’s show:

“But the now-former CBS staffer says she wasn't the whistleblower at all, and that the real one was ‘still inside’ ABC News. Francis said Wednesday on “Tucker Carlson Tonight” that she’s talked to people who work at ABC News and they’re hyperventilating over who actually leaked the scandalous video.

…’It’s all anybody can talk about,’ Francis told Carlson. ‘Who’s the whistleblower? Do you know?’

‘It seems like the person is still inside, but inside, people think that co-workers are trying to figure it out and then they’re gonna go tell their managers what they found. It’s all very 'Hunger Games’,'Francis said. ‘It’s so backwards because they’re trying to hunt down the whistleblower, as opposed to figure out why they sat on this story.’”

Catch that last line from reporter Francis? This one: “It’s so backwards because they’re trying to hunt down the whistleblower, as opposed to figure out why they sat on this story.”

And note the reference to CBS, a reminder that ABC and CBS colluded to get an ex-ABC staffer now with CBS fired on the assumption —  the apparently false assumption —  that she was the whistleblower.

Melissa Francis has it exactly right. And when you combine her reporting with that of Emily Smith over at The Post what is inescapable is that the tale tale of ABC and Jeffrey Epstein is just one more window into how corrupted the “mainstream media” has become.

Recall earlier this year the uproar at The New York Times that caused the paper to change a quite accurate headline about a Trump speech following the shootings in El Paso, Texas and Dayton, Ohio. The headline:  “Trump Urges Unity vs. Racism.”

Left-wing Times staffers (not to repeat myself) and left-wing readers were furious, so The Times editors pulled the headline and replaced it with this headline: “Assailing Hate But Not Guns”

This was followed with an internal Times “townhall” staff meeting, the transcript of which was leaked to Slate.The transcript revealed in stark detail exactly what has long been assumed by many. The Times is no longer in the journalism business, its in the left-wing propaganda business. It has gotten so bad at the paper that former editor Jill Abramson confessed the following in her recent book, as reported here by Fox:

“Though (Executive Editor Dean) Baquet said publicly he didn’t want the Times to be the opposition party, his news pages were unmistakably anti-Trump,” Abramson writes, adding that she believes the same is true of the Washington Post. “Some headlines contained raw opinion, as did some of the stories that were labeled as news analysis.”

Taken together, the freaked-out ABC reaction to their internal whistleblower, the network’s cover-up of the Epstein story - something that also happened at NBC as documented by ex-NBCer Ronan Farrow- the collusion of ABC and CBS in the firing of the ex-ABC staffer plus The New York Times “unmistakably anti-Trump” bias and the inescapable conclusion is these and other major American media institutions have been completely corrupted. Infected with a rampant radical left-wingism that is poorly concealing that there are no journalists in these institutions but rather nothing more than radical leftist political activists.

Is it any wonder than that headlines like this one pop up in the media oriented Variety: “Fox News’ Primetime Ratings Surge After Mueller Probe Wraps.”

That headline was in March. The story began:

"Sean Hannity always nabs one of the biggest slices of viewership in cable TV. Suddenly, his 9 p.m. hour on Fox News Channel is attracting even more people than usual.

For four days, Fox News’ primetime lineup has seen distinct rises in the average number of viewers tuning in, while rivals MSNBC and CNN have seen drops.”

Now jump ahead to just this past week and this headline following Day One of the Schiff Schampeachment. Fox News Dominates CNN, MSNBC In Impeachment Coverage Ratings.”

Without doubt the Fox ratings are directly attributable to a realization by millions of Americans that yes, in fact, the “mainstream media” is hardly mainstream. It has no more credibility. It has been thoroughly corrupted by left-wing activists. Whether its protecting a known pedophile (Epstein at ABC and NBC), colluding to uncover a whistleblower (ABC and CBS) or changing headlines at the Times to fit the far-left agenda, those millions of Americans get the game.

And as those Fox ratings show —  in fact, as the election Donald Trump shows —  they have had enough.