Recall the furor over the Access Hollywood tape in the fall of 2016?

In which someone leaked a tape from the NBC show, two days before the second presidential debate, to The Washington Post? The tape had then-presidential candidate Donald Trump making a lewd and gross remark about women to the show’s host Billy Bush?

Uproar ensued. Trump issued an apology and Billy Bush was forced to resign.

Contrast this with Ronan Farrow’s tale of the very same network’s treatment of Harvey Weinstein and Matt Lauer. Back in June, Vanity Fair published a piece by Farrow’s NBC producer Rich Mchugh. The title of the article: “'You Are to Stand Down': Ronan Farrow’s Producer on How NBC Killed its Weinstein Story.”

In which the producer — who resigned from the network over this, as did Farrow — writes this of NBC:

“One year ago, I resigned from NBC News because they ordered me to stop reporting on Harvey Weinstein, and I did not believe that they had been truthful with me or Ronan Farrow, the correspondent with whom I worked for almost a year on what would become one of the defining stories of our time. I felt a responsibility to speak up, and I thought that going on the record might shed some light on what was, as I told the New York Times, a ‘massive breach of journalistic integrity.’

…Weinstein, Ronan explained, had said that ‘NBC legal gave him an assurance yesterday all stories about him were dead and all reporting on him was halted. No one is allowed to use NBC while reporting on him.’”

Farrow himself has a book out, Catch and Kill: Lies, Spies, and a Conspiracy to Protect Predators. In which the ex-NBC correspondent tells the inside story of how NBC approached the Matt Lauer sex scandal — a scandal that Farrow says was used by Weinstein to leverage NBC into essentially blackmailing the network to squash Farrow’s reporting on Weinstein.

In other words? A tape of Donald Trump made while he thought he was having a private conversation was made by NBC- and leaked to The Washington Post. But a detailed story about not words but real allegations of sexual assault against liberal and Hillary Clinton pal Weinstein? NBC killed the story.

Then there’s the whistleblower story. One media outlet after another has gone out of their way to protect the whistleblower by withholding his name.This prompted Kentucky Senator Rand Paul to say this at this week’s Trump rally in Kentucky: “I say tonight to the media, do your job and print his name!”

Right on cue the media went after - Rand Paul. Here is the NewsBusters report on just CNN: “CNN Slams Rand Paul's Call for Transparency as 'Deceptive' 'Bullying' of 'Brave' Whistleblower.”

The story by Kristine Marsh began this way:

“After it was revealed last month that the anonymous “whistleblower” worked for 2020 candidate Joe Biden when he was vice president, ABC squashed the important story calling it a “smear campaign” put out by President Trump. This morning, the media continued trying to protect the whistleblower’s partisan identity, by attacking Republican calls for transparency. On CNN Tuesday, a panel trashed Sen. Rand Paul’s ‘deeply deceptive and underhanded’ demand that the media do their job and publicly identify the whistleblower who’s complaint launched this whole impeachment inquiry.”

Note the first sentence? It said:

“After it was revealed last month that the anonymous “whistleblower” worked for 2020 candidate Joe Biden when he was vice president, ABC squashed the important story calling it a “smear campaign” put out by President Trump.”

You read that right. ABC “squashed” a story that said the Trump whistleblower had worked for former Vice President Joe Biden. 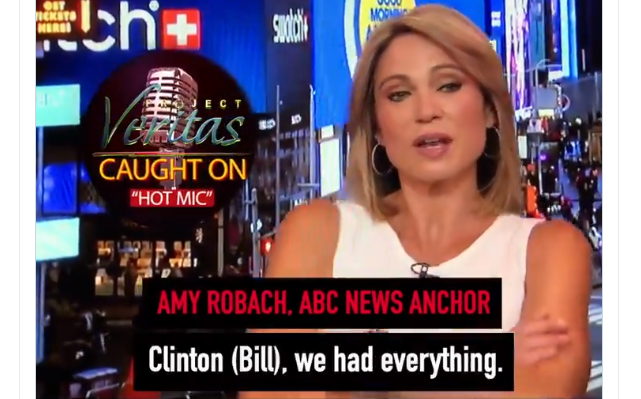 Now comes another whistleblower - this one blowing the whistle on ABC by providing a tape of ABC’s Amy Robach complaining on camera - though not on the air - that ABC squashed a story about the pedophile activities of the now deceased Jeffrey Epstein. And what happens to that whistleblower? Here’s this story from The Daily Caller: “‘It Wasn’t Me’: Alleged ABC Whistleblower Denies Leaking Video.”

“Journalist Megyn Kelly spoke to ABC’s alleged whistleblower during an exclusive interview posted on her Instagram account Friday, and the woman denied ever accessing the video after clipping it while still an ABC employee.

The woman who has been accused of having access to the tape is former ABC News producer Ashley Bianco, 25, who spoke to Kelly in an exclusive interview after CBS News fired her Wednesday. She worked at CBS for just four days after leaving ABC before being fired, she told Kelly. Executives at the outlet allegedly informed CBS of the situation prior to her firing, journalist Yashar Ali reported.

It’s okay to slam Rand Paul for demanding that the media publish the name of the Trump accuser/whistleblower in order to protect him. But an alleged whistleblower inside the media blowing a whistle on ABC and its protection of pedophile Jeffrey Epstein? Even though she has moved over to another network entirely, CBS —  not to mention that she flatly denies the allegation —  she is summarily fired after only four days on the job.

In other words? In other words the media has two very different standards. One standard for Donald Trump —  leak the embarrassing tape of a gross conversation to damage a presidential campaign. But when it comes to the alleged sexual assaults of serious predator Harvey Weinstein, NBC orders the reporter to “stand down.”  And when it comes a whistleblower who blew the whistle on the network’s protection of pedophile Jeffrey Epstein? ABC went out of its way to get another network to fire that suspected whistleblower - in spite of her flat denials.

It doesn’t get more hypocritical than that.