Oh the humanity! The horror!

President Trump this week tweeted this: 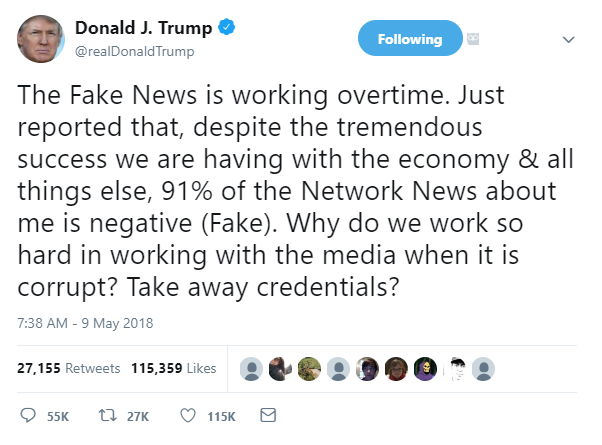 The Media Research Center’s Rich Noyes wrote this on NewsBusters on May 8:

The liberal media’s war against President Trump was as fierce as ever during the first four months of 2018, but the onslaught appears to be for naught: In the face of massive and hostile coverage from ABC, CBS and NBC, Trump’s overall job approval rating actually rose, from 37 percent in mid-December to roughly 43 percent at the end of April.

The Media Research Center studied all broadcast evening news coverage of the President from January 1 through April 30, and found 90 percent of the evaluative comments about Trump were negative — precisely the same hostile tone we documented in 2017.

“Some may excuse the president’s inflammatory rhetoric about the media, but just
because the president does not like news coverage does not make it fake. A free press must be
able to report on the good, the bad, the momentous and the mundane, without fear or favor. And
a president preventing a free and independent press from covering the workings of our republic
would be an unconscionable assault on the First Amendment.”

This, mind you, from the self-same group to which I sent the following inquiry before their recent dinner that made much of celebrating the First Amendment. To Margaret Talev, this year’s WHCA president, I wrote:

“This year there have been boycotts to force Laura Ingraham off of her Fox show and another attempting the same with Sean Hannity. Kevin Williamson, as you know, left National Review to accept an invitation from The Atlantic, where he was fired after two days for controversial tweets from an earlier time. When he pointed out to editor Jeffrey Goldberg that the late Atlantic contributor Christopher Hitchens was noted for controversial writings the response was: ‘Yes. But Hitchens was in the family. You are not.’

With all of that in mind, I note you have said of President Trump that “he will actively encourage members of the executive branch to attend and join us as we celebrate the First Amendment.”

My question: In celebrating the First Amendment, will anyone speaking at this year’s dinner be defending the free press/free speech rights of Laura, Sean, and Kevin? If not, why not?”

And the response from Ms. Talev? Complete and total silence. When the dinner rolled around there was not a peep about the assault on the First Amendment rights of Hannity, Ingraham and Williamson. (And full disclosure, I write columns at Hannity.com) Say again…not…a…peep. A check last year on this subject with Rush Limbaugh and I was told they had never bothered to stand up for him either when he was under assault from liberals wanting to get him off the air.

Now? Mere words from a president using his own First Amendment rights and suddenly WHCA leaps into what passes for action from them. They castigate the President - really! - for “inflammatory rhetoric” - but are silent as liberal media was busy castigating Trump as another Hitler, an authoritarian and more. Hey…no inflammatory rhetoric there!

Let’s recall a few things here about a president who actually did serious damage to press freedom. As the WHCA dinner loomed in 2017 (and yes, I was there for that one) The Washington Examiner’s Becket Adams took note of all the faux outrage by various media outlets that President Trump was stiffing the dinner for a rally in Harrisburg, Pennsylvania. The event is decorated with lavish media parties strewn throughout the weekend of the Saturday night event, not to mention on Saturday itself. But in 2017 with Trump in the White House and taking repeated shots at the “Fake News media”? With unerring accuracy, Adams wrote:

“Though Time, People, The New Yorker and Bloomberg are coy about what drove them to cancel their parties, Vanity Fair's editor in chief, Graydon Carter, came right out and said it was Trump.

It's a strong reaction to a president who, in spite of all his anti-media tough talk, hasn't actually done anything like what his predecessor did to curb press freedoms.

The Trump administration hasn't, for example, subpoenaed reporters in an effort to get them to reveal their sources. Nor has it secretly collected reporters' phone records. Nor set new records for denying Freedom of Information Act requests.

These distinctions go to Obama, whose two terms in office included several real infringements on the press.

In February 2011, for example, federal investigators were revealed to have spied on the New York Times' James Risen. They were attempting to determine whether he was the recipient of leaked CIA information. Investigators went through Risen's credit reports and his personal bank records, and they obtained information about his phone calls and travel, according to a motion filed in a federal court.

In April of that year, the New Yorker, Vanity Fair and Bloomberg hosted WHCA parties as if nothing had happened."

Note well that James Risen called Obama the “greatest enemy of press freedom in a generation.”
He wrote an op-ed in The New York Times headlined: "If Donald Trump Targets Journalists, Thank Obama.”

So what do we have here? The Correspondents’ Association has its knickers in a knot because of things Trump has said - which is to say they are not pleased that he has used his own First Amendment rights to express his displeasure with the media. But boycott a WHCA dinner featuring President Obama when the Obama administration is busy using the Department of Justice to jail reporters, eavesdrop on reporters, threaten reporters and “secretly collect” information about reporters? Hey…party on! And didn’t Mrs. Obama look stunning tonight!

To borrow from an old movie, that old Paul Newman classic Cool Hand Luke, “What we've got here is failure to communicate.” So let’s make this as plain as possible.

Giving a left-wing President of the United States a pass when he is busy trying to jail, snoop on and otherwise actually assault the First Amendment is disgraceful. Being stone cold silent on the First Amendment assaults on a Hannity, Ingraham, Williamson and a list of conservative media figures from various members of the American Left while pretending support for a free press is inexcusable.

All of which, in turn, makes utterly laughable the business of flying into a tizzy when that President’s successor merely verbally chastises the media for, as the Media Research Center vividly demonstrated, a mind-blowing and quite deliberate bias. What is really going on here is that the liberal media effectively gives a nod to those who would “pull the credentials” of the conservative media.

Over at The Washington Post, media journalist Erik Wemple praised the Correspondents’ Association reaction to Trump’s latest statement by praising the group  for, incredibly, getting “a spine.” Apparently a limp noodle passes for a spine in Dr. Wemple’s view. Wemple closed out his  column by saying:

“As ever, the President’s ongoing effort to poison American journalism among his followers is far more lethal than anything he could do with White House press passes.”

It would be respectfully suggested here that American journalism has determinedly been swallowing its own journalistic arsenic - liberal elitism - for decades. Now so self-poisoned - the word that comes to mind is addicted - the liberal media that shoots up by trashing Trump and refusing to stand up for conservative media is stunned to find themselves viewed in more untrustworthy terms than Lucy promising Charlie Brown that this time, really, honest, she will hold the football.

The real bottom line is that the liberal media pulled the credentials of their own credibility a long, very long, time ago.