The Washington Free Beacon watched so the rest of us didn’t have to. Ace reporter Conor Beck got the goods, and headlined them thusly: “Late-Night Comedy Shows Ignore Harvey Weinstein Sexual Harassment Allegations
Hosts pounced on similar allegations against Bill O'Reilly, Roger Ailes.”

The New York Times report, which claimed that Weinstein has been accused of sexual harassing at least eight women, including actresses Ashley Judd and Rose McGowan, over the span of nearly 30 years, broke at around 2 p.m. EST on Thursday, only a few hours before late-night shows typically tape. But those same shows regularly provide same-day jokes on news regarding President Donald Trump that has broken well after then, the Daily Beast reported.

Late-night comedians Jimmy Kimmel, Jimmy Fallon, Seth Meyers, James Corden, and Stephen Colbert all avoided any mention of the allegations against Weinstein, both in their monologues and interviews with movie-star guests. The Daily Beast noted that Corden and Fallon have appeared in Weinstein films.

The only late-night comedian to make a joke about Weinstein was "The Daily Show" host Trevor Noah, who briefly mentioned the Hollywood producer in passing.

Move on to something former White House Press Secretary Sean Spicer caught when reading The Washington Post. He tweeted out the following: 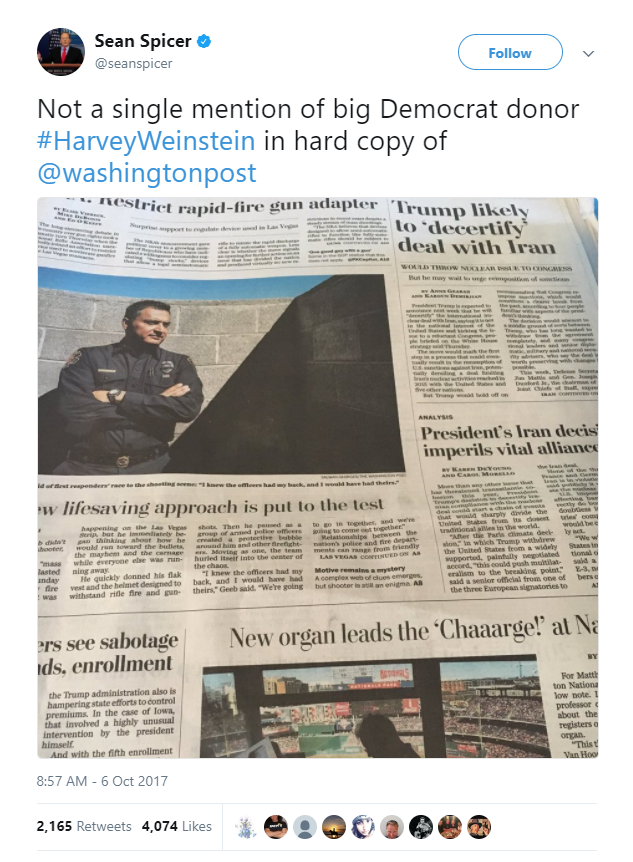 Spicer posted a photo of The Post’s front page and, lo and behold, not a word about Weinstein.

Okay, full stop. What we are seeing with the late night crew — and one suspects that now caught-out they will eventually get around to Weinstein — is exactly the liberal mind-set at work.

Scott Whitlock has it exactly right. These would-be speakers-of-truth-to-power whether on late-night TV or at The Washington Post suddenly find their tongue tied when the man at the center of a sexual harassment scandal is a powerful Hollywood liberal.

It’s okay to go after Roger Ailes and Bill O’Reilly when accusations of sexual harassment surface — but one of the most powerful men in Hollywood? A liberal? Not a prayer that the funny guys would subject somebody to repeated sharp ridicule and lectures when that somebody has the power put one of them in a movie or could affect which movie stars show up to sit and chat on their couches. To borrow from Jimmy Kimmel, Harvey Weinstein has the balls of late night liberal comedians in a money clip.

In the case of The Post? They have number of online articles, but the physical paper's omission is significant. Here was a headline for one of their stories: “The rise and fall of Harvey Weinstein, the Hollywood mogul accused of serial sexual harassment.”

Question? What is the name of the city in The Post’s formal title? That’s right. It’s The Washington Post. You know — Washington as in Washington, DC, the nation’s capital. The city where there are more politicians per square foot than actors in Hollywood and that’s saying something. And in that entire Washington Post story on Harvey Weinstein what is not mentioned?

That would be the abundantly obvious and easily documentable fact that Harvey Weinstein wasn’t just a powerful liberal in Hollywood — he was one powerful and very rich donor to Democrats. Not a word in that Post story, not a one — in a paper that spends oodles of money on printer and cyber ink covering politicians — that liberal Democrats were repeated recipients of Weinstein’s financial generosity. From Hillary Clinton to Bill Clinton, Barack Obama, Elizabeth Warren, Chuck Schumer and more. Many, many more.

Then, literally minutes after Rush Limbaugh was off the air on Friday, freshly blasting Democrats for being complicit in Weinstein’s antics by ignoring what clearly a lot of people in Hollywood well knew, The Post comes back to report a new story: “Schumer and at least six other Democrats to send Weinstein donations to women’s charities.”

And The Post, in this belated story that now focused on the mad rush to give back Weinstein money included this sentence at the end of the piece: “The megaproducer’s pattern of allegedly inappropriate behavior has been described as an open secret in the film industry.”

Got that? Weinstein’s rampant behavior was an “open secret” in the film industry. Yet somehow Weinstein was a repeated visitor in both the Clinton and Obama White House. Without a peep from either then-First Ladies Hillary Clinton or Michelle Obama. Imagine that.

What we have here in this silence from the late-night liberals and the belated coverage of Weinstein and his donor relationship from The Post is merely the tip of the liberal media iceberg that lurks underneath every liberal media outlet. Indeed, it is some sort of curious miracle that the Weinstein story was investigated by The New York Times in the first place.

The hard fact is that if you were Roger Ailes or Bill O’Reilly or Fox News or any conservative talk radio host — much less President Trump — there is one standard. If you are Harvey Weinstein or Bill and Hillary Clinton or Barack Obama or any other liberal accused of sexual harassment or documented as taking money from an allegedly primo harasser or entertaining same in the White House then well, just one big no big deal.

The silence of the late night liberals and the Johnny-come-lately approach of The Post’s coverage says everything one needs to know about how the liberal media works no matter the topic.