Dr. Tom Frieden, the Director of the Center for Disease Control, has just slammed headlong into the Taranto Principle. No wonder this smart, talented doctor is wandering around staggered at repeated calls to resign, calls coming from everyone from Fox’s Bill O’Reilly to members of Congress and a growing crowd beyond.

What is the Taranto Principle? It is perhaps explained best here by R. Emmett Tyrrell, Jr. of The American Spectator back in 2008 in a piece titled: The Taranto Principle: Left-wing media bias ends up hurting the left-wing pols it's supposed to be helping.

Wrote Tyrrell by way of explanation:

“What is the Taranto Principle? It is a principle laid down by the Wall Street Journal's perceptive editorialist, James Taranto. Taranto, in his column "Best of the Web Today," surveys the media and reports daily on their output with special emphasis on their contradictions, hypocrisies and -- most deliciously -- imbecilities. Like all other thoughtful observers of American media, Taranto recognizes that they are heavily biased toward the Democratic Party and the left in general. Yet, while many who hold that this advances the Democratic Party and the left, Taranto believes that it has a harmful effect on left-wing politics, often causing left-wing candidates to lose at the polls.

According to the Taranto Principle, the media's failure to hold left-wingers accountable for bad behavior merely encourages the left's bad behavior to the point that its candidates are repellent to ordinary Americans. According to Taranto, in 2004 the media quietly went along with Senator Jean-Francois Kerry's exaggerated claims to heroism and military prowess, thus encouraging his braggadocio and leaving him utterly unprepared when his fellow vets stepped forward and demonstrated that he had been a dreadful showoff in Vietnam. Officers who had fought alongside him served up evidence that his exploits were embellished and sometimes completely made up. They cast doubt on his medals and most damningly reminded us that in testimony on Capitol Hill Kerry accused his fellow soldiers of war crimes. The vets reproduced the video, video that any journalist could have laid hands on.

The vets' assault on Kerry is now called "Swift Boating" by left-wingers and journalists alike, who insist the vets' charges were "lies," though four years later it is apparent that the so-called lies composed an accurate rendering of blowhard Kerry's war record. Had the media treated his initial boasts with some skepticism, he might have been better prepared for the vets' response. The left-leaning media spoiled Kerry and brought out the worst in him to the revulsion of enough voters to lose him the election.”

Now comes the CDC’s Dr. Frieden. On paper a thoroughly well-qualified doctor chosen by President Obama in 2009 to head the obscure-to-most-Americans Center for Disease Control. Unlike other presidential appointees - a senior Cabinet officer or White House aide - the head of the CDC generally labors in anonymity (other than to those in the medical field), impinging on the public consciousness only when a blessedly rare moment of public health concern arrives. A flu epidemic or such.

In Dr. Frieden’s case, his career, such that it has involved any public profile at all, was once most notable for his role as New York Mayor Michael Bloomberg’s Commissioner of the New York Department of Health and Mental Hygiene (DOHMH). Not for nothing did Mayor Bloomberg win the nickname “Nanny Bloomberg”, notorious for his bossy, nanny-like insistence on telling New Yorkers how to run their health. Dr. Frieden was the instrument by which Bloomberg pursued his obsessive nanny-ness. Shortly after settling in to his new job, the New York Times reported enthusiastically that Frieden had declared smoking and tobacco use “Public Enemy No. 1.” Over time Frieden led all manner of liberal nutritional causes in New York City, including demanding a ban on trans-fats and forcing restaurants to post “menu labeling” that detailed everything from calories to grams of saturated fat in a restaurant’s servings.

This was New York City, a city colored in the bluest of blue political hues. Home to every left-wing organ and personality from the New York Times to Al Sharpton. Frieden’s activities, to the extent that they received public notice, were received with approving nods from the city’s ruling class liberals and media elites. (But I repeat myself.) 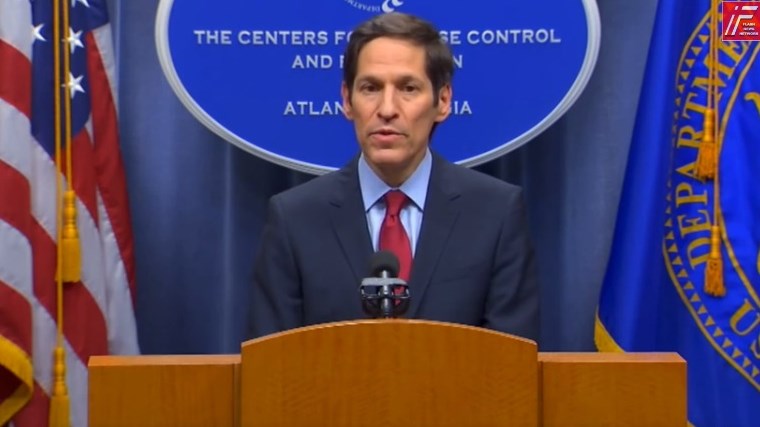 Now? Now Dr. Frieden, by the un-luck of the draw, finds himself at the head of the CDC as the specter of Ebola arrives on US shores. In dealing with it, he suddenly finds himself not only one of the most increasingly infamous men in America, abruptly a household name, but being pilloried by everybody from Bill O’Reilly to sharply demanding members of Congress. The response of Frieden’s supporters and even those who are not necessarily supporters but merely observers is, in essence” “How can this be? Dr. Frieden is such a renowned physician.” Followed by a recitation of his career accomplishments and salutes to his liberal character.

What Dr. Frieden has slammed into here is a pluperfect example of the Taranto Principle at work. Or put another way? To borrow from Dorothy in the Wizard of Oz, “Toto, I don’t think we’re in Kansas anymore.” Dr. Frieden is no longer in Manhattan, issuing liberal health edicts to the applause of an overwhelmingly approving liberal elite, receiving plaudits from the liberal media typified by the hometown New York Times.

Frieden has the admittedly bad luck of being the CDC Director as the Ebola issue lands on the CDC’s doorstep. But from there? Alas, the good doctor is suddenly finding that just because good ole liberal Doctor Tom is in charge - make that especially because he is increasingly being seen as a liberal - his every word is being scrutinized. His policy and verbal missteps blowtorched by a visibly furious O’Reilly, grilled by a sharply questioning Megyn Kelly and more.

Making of Dr. Frieden the health care version of 2004’s Senator John Kerry. The latter who, as noted by Bob Tyrrell, spent an entire political career bathing in accolades from the liberal media for his Vietnam service. With nobody seriously challenging the image of the brave, intelligent warrior “reporting for duty” (as Kerry began his acceptance speech at the 2004 Democratic Convention.) Until, obviously out of the blue to both Kerry and his liberal media friends, Vietnam vets with an entirely different narrative of John Kerry’s time in Vietnam suddenly emerged to fire repeated political torpedoes at his presidential campaign - sinking it.

Now? Now the once unassailable judgment of Dr. Frieden is under assault. O’Reilly in particular has been blistering. Over at the liberal site the Talking Points Memo, O’Reilly’s remarks made headlines. Reported the blog Talking Points Memo:

Fox News host Bill O'Reilly described the director of the U.S. Centers for Disease Control and Prevention as the "chief propagandist" on Ebola and called on him to resign on Monday night's "The O'Reilly Factor."

O'Reilly also criticized Director Tom Frieden for refusing to come on his show.

"He will not because he is afraid," O'Reilly said. "He knows that I know he's not being candid. That he is spinning the situation and not being forthcoming about how the disease is being spread. Frieden should resign."

Frieden has urged calm and emphasized that cutting off flights to the U.S. would be more detrimental than helpful in stemming the flow of Ebola. O'Reilly called Frieden's statements "total garbage."

O'Reilly called the government's current policies for monitoring Ebola "stupid and irresponsible" and said they were putting "all Americans at risk."

"It's a dumb and dangerous ruse and Frieden is the chief propagandist. He knows better," the Fox News host said. "We are simply not being told the truth."

O’Reilly (and he’s right) isn’t alone in demanding Frieden’s head either. From Donald Trump to Rush Limbaugh to Mike Huckabee to Louisiana Senator David Vitter, assaults on Frieden’s credibility increase in volume by the day. With not only Frieden’s credibility but that of the CDC itself sinking faster than the Titanic. When we reach the point that the campaign fundraising-addicted President Obama cancels his attendance at fundraisers to stay in Washington and personally run White House crisis meetings on the administration’s Ebola response, it is clear that all this Frieden/CDC bashing in the media has taken a serious toll.

Over at Fox, Media Buzz host Howard Kurtz calls Frieden the latest “Ebola victim” who has been kicked around “like a piñata.” Kurtz did his best to defend Frieden, yet warned that the media coverage was “overheated” and saluted Fox’s Shepherd Smith for telling his audience not to listen to the louder and louder media chorus on Ebola. Still, Kurtz acknowledged that he didn’t believe the intensity of the Ebola coverage would change until Frieden at resigned.

He hasn’t resigned yet. But by the end of the week the White House had announced the appointment of Washington lobbyist and ex-Gore and Biden chief of staff Ron Klain to serve as an “Ebola Czar.”  Ron Klain is, in the vernacular, a “political hack.” No distinguished doctor he, or that matter no doctor period. Clearly what the Obama White House has done is realize they are so hard up against the Taranto Principle that they needed to appoint someone who is an expert in negotiating the media minefield. Willing to take the flak for not appointing a distinguished doctor or ex-general in favor of someone they trust for certain when it comes to presenting the Ebola problem to the American public.

Safe to say, Ebola has caught the Obama administration by surprise. But by now, even if not officially acknowledged as such, the recognition that Dr. Frieden has helplessly stepped on one media IED after another and needed to be if not replaced at least superseded by Mr. Klain is an admission that the Taranto Principle exists. It’s every bit as real in the world political as gravity is in the world of science.

John Kerry is Secretary of State today instead of an ex-president because he - and those around him - were clueless to the Taranto Principle. Even today, sulking liberals bitterly mutter about the so called “Swift Boating” of Kerry, a laughable symptom of their unreal world view from inside their coddled liberal bubble. As is frequently quoted, Einstein posited that the definition of insanity is doing the same thing over and over to no result. In the world of liberal politics and government, this is the very definition of not recognizing the Taranto Principle at work.

On Fox’s The Five Eric Bolling nominated Dr. Frieden for Fool of the Week. Doubtless true. But Dr. Tom Frieden is the Fool of the Week because he was one more victim of the Taranto Principle. The question is - does he even understand it?

Somehow I doubt it.