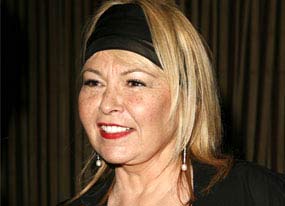 Perhaps this was a cry out for relevancy - something she hasn't been since the Clinton administration, but comedienne Roseanne Barr is showing her social commentary knows no bounds.

In a March 4 post on her blog, Barr used the suicide of Marie Osmond's son, Michael Blosil, to go on a sick and twisted anti-religion screed. According to the former sitcom star, any underlying issues that led to Blosil taking his own life were a result of "his church and the people in it":

"marie osmonds poor gay son killed himself because he had been told how wrong and how sick he was every day of his life by his church and the people in it. Calling that ‘depression' is a lie!"

Barr, with a total disregard for the rules of grammar, capitalization and punctuation, continued her rant by doling out criticism against the Mormon faith, ironically in the same way she seems to indicate that particular church acts toward homosexuality.

"Yet, even though the people they say they love the most in all of their public displays and speeches (THEIR KIDS AND FAMILY!!) are gay,-- their own children,for crying out loud- these people cannot find the christian decency and compassion within themselves to stop their hypocritical gay bashing!!" Barr wrote. "How sickening. I know so many mormon kids who were gay and committed suicide, and I just cannot and will not stay quiet in order to not offend bigots anymore."

To fix the situation - Barr declared it is time for Marie Osmond to denounce her Mormon faith because in her view it is what God wills.

"Marie please don't talk about how your faith in your church has helped you get through this one!" Barr wrote. "Please get some integrity and tell that church of yours that you will leave it and stop giving it ten percent of your money if they don't stop trying to destroy your kids' and all gay people's civil rights and dreams and hopes!! G-d is trying to use you for something good and this is your opportunity! Your church is wrong and on the wrong wrong wrong side of things!"

Barr has come back and praised Marie Osmond, but has shown no remorse for her previous anti-religion comments in a post dated March 6.

"I have no more tolerance for any religion in any way," Barr wrote. "They are all obsolete and harmful."

Osmond is a member of the Church of Jesus Christ of Latter Day Saints.