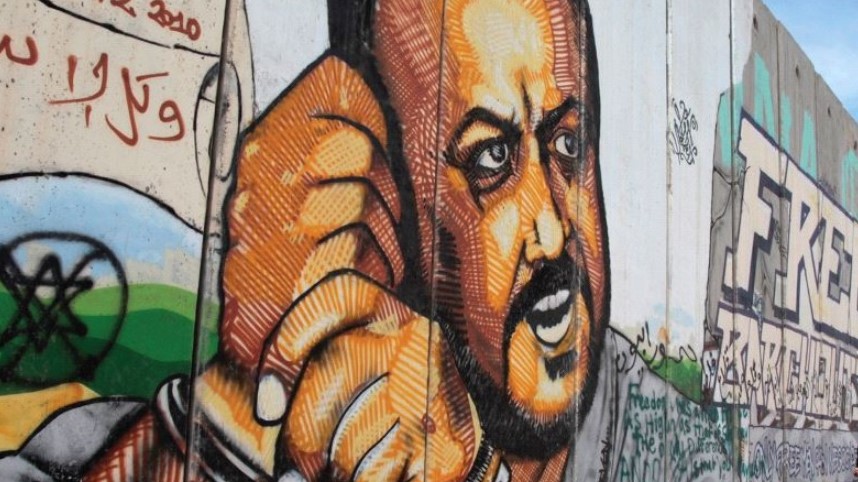 Last week, the New York Times published a sympathetic profile of Marwan Barghouti and his wife Fadwa, who have been separated for 15 years. In 2004, Marwan was convicted of and imprisoned for the murder of five Israeli civilians as part of the Al Aqsa Martyrs Brigade. The headline was "Fadwa Barghouti is the unflappable voice of a jailed Palestinian freedom fighter."

In the article, freelancer Shaina Shealy wrote, "Fadwa says Palestinians have a magical love for Marwan. Israelis see him as a murderer who incited acts of terror against innocents. He’s made a name for himself as a freedom fighter, the Palestinian Nelson Mandela — a connection he recently made in a New York Times op-ed. His giant portrait colors Israel’s concrete separation barrier in Ramallah, and tags of his face are spray-painted on walls all over the West Bank."

The outlet published an op-ed by Marwan last April about the Palestinian prisoner hunger strike, which ended after 40 days. In it, he accused Israel of capturing "children, women, parliamentarians, activists, journalists, human rights defenders, academics, political figures, militants, bystanders, family members of prisoners. And all with one aim: to bury the legitimate aspirations of an entire nation." This is despite the fact Israel is the only true democracy in the Middle East and has made numerous peace offers to the Palestinians, only to be rejected each time by Palestinian leadership.

Moreover, Shealy's piece does not feature the other side and quote Israelis who have some relation to those affected by Marwan's heinous acts, such as during the Second Intifada between 2000 and 2005 when hundreds of Israelis were killed in nightclubs, cafes, and buses. Instead, the piece discussed the hardship the terrorist's wife faces daily. Apparently, Shealy does not write about how Gaza, which is run by the US-designated terrorist group Hamas, is a hellhole for its citizens with rockets in public areas like schools and that Hamas uses innocent civilians, especially women and children, as human shields.

"But Fadwa’s professional focus these days is building the campaign for Marwan. Her role in his campaign, she says, runs parallel to her goal of helping women," Shealy wrote. "To Fadwa and other Palestinians, Marwan is one of the only leaders with potential to make life better for future generations of Palestinians, and he specifically wants to help Palestinian women. Fadwa is his lifelong partner in that endeavor."

Shealy's piece is just one of many anti-Israel pieces the New York Times chooses to publish, one of which included a blatantly false article last May by Iranian foreign minister Javid Zarif about his country's efforts to “aiding the victims of extremism in Iraq and Syria,” despite the fact that the world's leading state sponsor of terrorism backs Bashar al-Assad's genocidal regime, which has killed approximately half a million of his own people. That same month, the Times publihsed another anti-Israel opinion piece by a Palestinian lawyer Raja Shehadeh, complaining about Israeli security checkpoints between Ramallah and Ben-Gurion International Airport. “We cannot afford to abandon the struggle and must do what we can to end this occupation,” he wrote.

Shealy's piece concluded, "When Fadwa agreed to marry Marwan, he told her that when Palestinians are free, he’d leave politics and come home. Fadwa didn’t hesitate to join his cause. But she also didn’t expect their struggle to last this long — to have grandkids who don’t know their grandfather. 'Marwan and I thought the suffering we will go through will make our kids’ lives better,' she says. 'I have been waiting for that for 32 years.'"

This isn't "news" the New York Times is publishing. It's gooey publicity.