On Thursday's Morning Joe, the panel discussed TIME Magazine's latest cover of White House Chief Strategist Steve Bannon, captioned "The Great Manipulator." It is important to note, unlike former Bush senior adviser Karl Rove and former Obama adviser David Axelrod, Bannon has been dubbed as if he is the "president's brain." The former was on the cover of TIME in 2005, while Axelrod has never been pictured there.

"He is one of the ones the people should be talking about. The senior strategist position at the white house is like Karl Rove, David Axelrod are the story materials for the president to help craft the narrative to allow him to achieve his vision," the article's author Michael Scherer said, explaining the caption. "What distinguished Bannon is the ambition of that vision. He was integral to rather than blunt inaugural address. He's been a major driving force behind Trump's combativeness with the press. He was deeply involved in the operational problems over the weekend on the rollout of the executive order against refugees."

Scherer added, "[Bannon] sees this as a moment in time where president will not only change the policies for the country but he sees this as a historic moment, a turning in terms of changing the entire establishment, breaking down the old order as it has been, and building something new. And so it's really the reach that makes him notable." 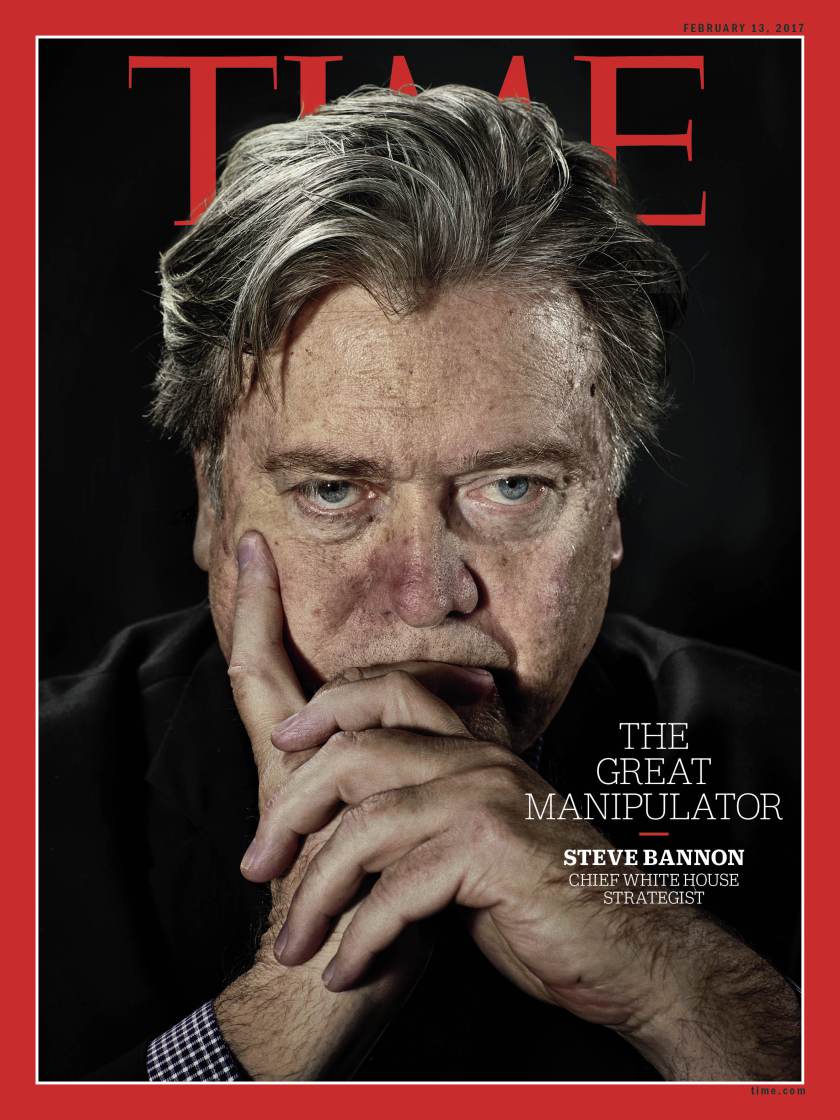 In the cover story, David Von Drehle wrote, "There is only one President at a time, and Donald Trump is not one to cede authority. But in the early days at 1600 Pennsylvania, the portly and rumpled Bannon (the only male aide who dared to visit Trump’s office without a suit and tie) has the tools to become as influential as any staffer in memory."

"Plenty of presidents have had prominent political advisers, and some of those advisers have been suspected of quietly setting policy behind the scenes," the editorial board wrote. "But we’ve never witnessed a political aide move as brazenly to consolidate power as Stephen Bannon — nor have we seen one do quite so much damage so quickly to his putative boss’s popular standing or pretenses of competence."

Rove was pictured on the July 25, 2005 cover of the magazine, which implicated Rove's alleged involvement during the Valerie Plame affair. In the cover story, managing editor Nancy Gibbs wrote, "Naturally it would feature Rove, as brass-knuckled a player as has walked onstage in a generation."

"And all the while, Rove's defenders were artfully pivoting from saying he hadn't done anything to saying he hadn't done anything wrong, that Plame wasn't really a secret agent anyway, or if she was, Rove didn't know that, or if he did, he only brought her up because he was trying to keep reporters from writing a bad story based on Wilson's false charges, and besides, it was a reporter who blew Plame's cover to him in the first place and not the other way around," Gibbs added.

Time Inc. did not respond by press time to a NewsBusters request for comment.

JOE SCARBOROUGH: Go back to the shot. At least they got a favorable shot of him.

BRZEZINSKI: Tell us about Steve Bannon. I honestly -- I can't figure out if Bannon is actually the one everyone should be talking about, but you tell me why he's being given the headline, “The Great Manipulator.”

SCHERER: He is one of the ones the people should be talking about. The senior strategist position at the white house is like Karl Rove, David Axelrod are the story materials for the president to help craft the narrative to allow him to achieve his vision. What distinguished Bannon is the ambition of that vision. He was integral to rather than blunt inaugural address. He's been a major driving force behind Trump's combativeness with the press. He was deeply involved in the operational problems over the weekend on the rollout of the executive order against refugees. He sees this as a moment in time where president will not only change the policies for the country but he sees this as a historic moment, a turning in terms of changing the entire establishment, breaking down the old order as it has been, and building something new. And so it's really the reach that makes him notable.

BRZEZINSKI: I have to push back a little bit, because everything I've seen -- and I've seen a lot -- I don't think anyone is manipulating Trump. I think trump is the last person in the room. I think this is all kind of "Trumped" up. I don't understand where you're seeing actual sort of concepts or ideas that are coming out of someone else's mouth and the strings are being pulled. This is the one thing we know guessing, including people like Steve Bannon. That, I know.

SCHERER: No, I absolutely agree with you. The argument here is not that Donald Trump is not pulling his own strings. It's not similar to the criticism that was leveled at George W. Bush when people were calling rove bush's brain. Trump is his own man. He makes his own decisions. He takes viewpoints from lots of different people. But the role of the chief strategist is one of telling the story that shapes the nation and shapes the presidency and that is Bannon's role.

HALPERIN: Michael, Bannon, obviously, is playing a role in foreign policy, fame loosely added to the national security council staff. But on domestic policy, one of the things that confuses me is people talk about him as populist and surrounded Goldman Sachs, his former firm. How does that work?

SCHERER: I think we have how that works. A lot of questions how it will work inside the white house and how it will work with congress. The president is going to have to work with congress and there is very different views about that. His critique of Goldman Sachs where he used to work of the banking elite was really directly focused on the 2008 financial crisis. He views, he has said this many times in interviews and made movies about it, that the banks lost their way. That institutions that were built, you know, with a public service in mind, at some point game greedy, that the rules took advantage of the rules and that he is really taken a very populist reading which is wildly held in the country of bankers getting away scot-free on the backs of the taxpayer and the little guy and that was his fury. I think he continues to see, you know, the value of expertise and the value of the capital system. It's not as if he against banks or bank than. It's just he has been very critical how the recession went down.

WILLIE GEIST: Broad question here. But given all you've described about his world view, Stephen Bannon's world view and the indication it has for President Trump's policy, what does the country look like in his utopia, let's say, in four years or eight years?

SCHERER: I think, you know, he made a movie called "Generations euro" after the financial crisis and based on the idea there are generational cycles in American history and end in crises. The thesis this happens every 80 years and we are now at another crisis moment. When those crises happen, the old institutions kind of get washed away and a new order comes out. Now exactly how dramatic that washing away is, you know, whether it involves a great war like those other moments did, and how much the institutional change happens we are not sure. If you listen to what Bannon says, it's clear, to take the media, for instance, he sees corrupt institutions that need to be washed away and review what they do and how to approach their jobs. I think you can say the same for the banking industry. Critique he has given against them. It's an unknown question. What is clear it's a dramatic vision.

GEIST: An incredible piece. The new issue of "Time" is now out. Michael Scherer, thanks so much.