You're Definitely A Liberal When ... Assertion #7,546 -- You claim with a straight face that taxpayer-funded food stamps are wondrously stimulative for the economy.

It's been so long since this one crossed my path that I'd begun to believe it was too delusional even for the left.

But sure enough there it was, making its inevitable reappearance on Thom Hartmann's radio show last week. Perhaps it had something to do with the onset of the holiday season. While many if not most liberals no longer believe in Santa Claus, here's one who still believes in Santa Claus economics.

HARTMANN: OK, why would you want to cut back on people taking welfare ...? 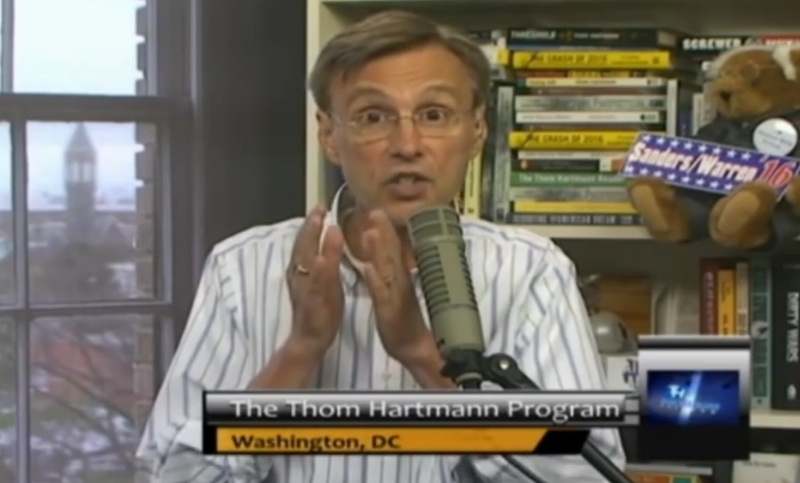 This from a man who described himself to Politico as a "Democratic socialist." Since then he's morphed into the rare bird capitalist socialist.

HARTMANN: But if capitalism and free enterprise are not working, and you know there's this thing called the business cycle. Anybody who's been in business for any period of time can tell you, particularly anybody in investments or in small business or in large business for that matter, will tell you, there are, you know, we go through booms and busts. ... For example, we're six years right now into a bull market, or we were up until about five months ago and now the market is going negative. That's real common. In fact it's really rare that a bull market lasts more than five years.

Notice the rhetorical sleight of hand here, Hartmann suggesting that food stamps are comparable to wages. Fundamental difference -- one is earned, the other isn't. Allow me to suggest that food stamps are more closely comparable to currency, and those in the "bottom half of the income bracket" who receive them also "tend to spend" all of their currency and "they tend to spend (it) quickly," to borrow from Hartmann's argument.

Which begs the question -- why bother giving food stamps to the poor when we can just give them money? Imagine how amazingly stimulative it would be to the economy if the government began printing money around the clock and funneled it directly to the poor. The multiplier effect would be beyond calculation, right ...?

With the official jobless rate dropping in half during Obama's presidency, and the economy allegedly humming right along, two claims frequently made by liberals, it should go without saying that spending for food stamps should be comparably declining. But any suggestion along these lines is met with predictable caterwauling on the left about cold-hearted conservatives waging yet another war, this one on the impoverished.

Hartmann's claim is merely a variation of the broken window fallacy beloved on the left. A liberal sees a baker's window smashed by vandals as economically "stimulative," because the baker must buy new glass from a glazier that employees workers, who send the glass via a transport company that employs dispatchers and drivers, whose vehicles need gas, tires, engine parts, and so on.

A conservative sees the same broken window and knows that the money spent by the baker to replace the glass is money he or she is not otherwise spending -- and the other spending would have been genuinely stimulative.

As described by Henry Hazlitt in his concise gem of a text, "Economics In One Lesson" --

This little act of vandalism will in the first instance mean more money for some glazier. The glazier will be no more unhappy to learn of the incident than an undertaker to learn of a death. But the shopkeeper will be out $250 that he was planning to spend on a new suit. Because he has had to replace the window, he will have to go without the suit (or some equivalent need or luxury). Instead of having a window and $250 he now has merely a window. Or, as he was planning to buy the suit that very afternoon, instead of having both a window and a suit he must be content with the window and no suit. If we think of him as part of the community, the community has lost a new suit that might otherwise have come into being, and is just that much poorer. (emphasis added).

The glazier's gain of business, in short, is merely the tailor's loss of business. No new "employment" has been added. The people in the crowd were thinking only of two parties to the transaction, the baker and the glazier. They had forgotten the potential third party involved, the tailor. They forgot him precisely because he will not now enter the scene. They will see the new window in the next day or two. They will never see the extra suit, precisely because it will never be made. They see only what is immediately visible to the eye.

Hartmann, among those in the crowd gathered outside the vandalized bakery, sees but a single party in this scenario -- the glazier who benefits. The costs to the baker and to the tailor for the suit not ordered are both lost on him. Along the same lines, Hartmann and other liberals see only benefits from food stamp spending and none of its costs in either losses to the treasury or more borrowing by a government already heavily in debt.

The same claim can be made that credit card spending is "stimulative" -- which is true, but only until the bill arrives in the mail.