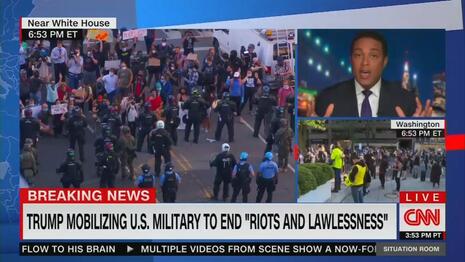 This week, NewsBusters is recounting the most obnoxious liberal bias of 2020.

On Monday, we presented some of the most outrageous examples of journalists fawning over liberal or left-wing icons; on Tuesday we looked at the year’s most horrendous examples of the media playing politics with the pandemic; and yesterday we highlighted the most rancid quotes attacking Republicans or conservatives NOT named Donald Trump, but who dared to support him.

Today, it’s a look at the media’s Trump Derangement Syndrome as we present the year’s most over-the-top attacks on President Donald Trump.

There was a lot to choose from: MSNBC’s Lawrence O’Donnell labelled Trump “a Russian operative.” CNN’s Christiane Amanpour linked Trump to the Nazis and — of course! — there were a plethora of incidents of journalists like MSNBC’s Chris Matthews and CNN’s Jim Acosta calling the President a “dictator.”

“Open your eyes, America. Open your eyes. We are teetering on a dictatorship. This is chaos. Has the President — I’m listening — is the President declaring war on Americans? What is happening here?”
— Host Don Lemon discussing Trump bringing in the military to stop looters, as aired on CNN’s Situation Room, June 1.

“The President is a Russian operative...It is Vladimir Putin’s greatest achievement….This is one of those shocking news days if you retain the capacity to be shocked in the Trump era by the Trump regime, which might be better labeled the Trump-Putin regime.”
— Host Lawrence O’Donnell on MSNBC’s The Last Word, February 21.

“This man [Donald Trump] who stands up every morning to excrete the feces of his moral depravity into a nation he’s turned into his physic commode....I don’t want to hear anybody else come up to me complaining about affirmative action or black people or brown people getting a job when you’ve got the most mediocre white man in the history of America running this nation and the complicity of the Senate.”
— MSNBC fill-in host Michael Eric Dyson on HBO’s Real Time with Bill Maher, January 31.

“President Trump spoke today with the venom of a black mamba. ‘Witch hunt, evil, corrupt dirty cops, leakers, liars, disgrace.’  These were the viperous words he spewed in the East Room on a day he began at a prayer breakfast....They sounded like the language of a dictator unleashing a violent purge that his targets would be unlikely to survive.”
— Host Chris Matthews on Donald Trump’s post-impeachment speech as aired on MSNBC’s Hardball, February 6.

Trump Would Totally Throw Us In Jail If He Could

“Our constitutional republic, literally, and the institutions in it, literally, are being challenged every single day by this would-be dictator....Would Donald Trump not do whatever he could do if he could get away with it? Seriously. If he could arrest every journalist he didn’t like, if he could arrest us tomorrow?”
— Host Joe Scarborough on MSNBC’s Morning Joe, February 12.

“This week, 82 years ago, Kristallnacht happened. It was the Nazis’ warning shot across the bow of our human civilization that led to genocide against a whole identity. And, in that tower of burning books, it led to an attack on fact, knowledge, history and truth. After four years of a modern-day assault on those same values by Donald Trump, the Biden/Harris team pledges a return to norms, including the truth. And, every day, Joe Biden makes presidential announcements about good governance and the health and security of the American people, while the great brooding figure of his defeated opponent rages, conducting purges of perceived enemies and preventing a transition.”
— Host Christiane Amanpour on PBS’s Amanpour & Co., November 12.

Correspondent Jim Acosta: “All we ended up with was the President of the United States looking like a wannabe dictator so he could walk over to a church and pretend to be concerned about the church. It’s just a sad and unbelievable thing.”
Host Anderson Cooper: “It’s like in some small country that’s taken over by some low-level lieutenant — you know, low-level colonel who gets on the airwaves and declares himself the law and order President.”
— Discussion about President Donald Trump walking across the street from White House to a fire-damaged St. John’s Episcopal Church, as aired on CNN’s AC360, June 1.

“The idea of being able to express oneself in front of the White House has been so iconic. It was converted instead to a version of Tiananmen Square.”
— CNN Legal Analyst Laura Coates on President Donald Trump walking across the street from White House to a fire-damaged St. John’s Episcopal Church as aired on CNN’s New Day, June 2.

“Like December 7, 1941, Americans will remember the first day of June 2020 as the date of a sneak attack against their countrymen, but while that 78-year-old atrocity was perpetrated by a foreign government, this one came from within.”
— Newsweek White House correspondent Andrew Feinberg talking about President Donald Trump calling in the military to stop looters in Washington D.C. in June 3 Independent online article.

“Does President Trump believe that it was a good thing that the South lost the Civil War?”
— The New Yorker correspondent Ryan Lizza to White House Press Secretary Kayleigh McEnany at White House press briefing, June 29.

“Dictator” Trump’s “Fascism” Is the “End of Democracy”

“I’m witnessing fascism in America now….This is the beginning of the end of democracy. If we re-elect this guy [Donald Trump] I do not even want to think about what will happen to this country....You know what this reminds me of? Back in the day when the militia — or whatever they were — killed that kid….those children at Kent State, when our government is actually killing American citizens, children, they were college kids, it’s the same. We were horrified then, we’re horrified now.”
— Co-host Joy Behar on federal agents detaining violent Antifa anarchists in Portland, Oregon as aired on ABC’s The View, July 21.

“As I’m watching this [Donald Trump’s acceptance speech], I’m thinking Fidel Castro, Julius Caesar, Mobutu Sese Seko. That was not an American President giving an acceptance speech. That was a monarch….This is what it will look like to have a decrepit, corrupt monarch. This was a crime. Every cabinet member that was sitting there was violating the Hatch Act….This would be the end of America.”
— Host Joy Reid on MSNBC’s Decision 2020: Republican National Convention, August 27.

“I don’t think we have seen a President of the United States completely lacking in shame. I mean, just shameless and obesely immoral. I mean, there’s not a moral fiber in this man….You cannot have watched that debate….and be proud of our President.”
— CNN AC360 host Anderson Cooper on CNN’s Debate Night in America, September 29.

Trump Took a “Dump” on Debate

Do You Want to Live In the America of “Bad” Man “Bull Connor” Trump?

Co-host Joe Scarborough: “I think most Americans would agree that this election is between a good man and a bad man. And I feel comfortable saying that Donald Trump is a bad man.”...
Former Newsweek editor Jon Meacham: “Do you want to be the America of John Lewis, or do you want to be the America of Bull Connor?...I know which side of history I want to be on and I think it’s just as blunt a choice, just as sharp a choice today.”
— MSNBC’s Morning Joe, October 22.

Trump Era of  “Cruelty” and “Meanness” Is “Coming to an End”

“It has also been a time of extreme divisions. Many of the divisions caused and exacerbated by President Trump himself....It has been a time where truth and fact were treated with disdain. It is a time of cruelty where official inhumanities such as child separation became the official shameful policy of the United States. But now the Trump presidency is coming to an end, to an end, with so many squandered opportunities and ruined potential, but also an era of just plain meanness. It must be said to paraphrase President Ford, for tens of millions of our fellow Americans, their long national nightmare is over.”
— Host Jake Tapper on CNN election coverage, November 7.