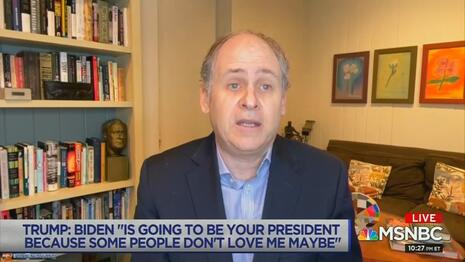 All this week, NewsBusters is recounting the most obnoxious liberal bias of 2020.

Yesterday, we presented the most outrageous examples of journalists fawning over liberal or left-wing icons; today’s installment showcases some of the year’s most horrendous examples of the media exploiting the pandemic to score political points against Republicans.

In 2020 the media sickeningly blamed Donald Trump and Republicans for exacerbating the virus with the likes of NBC’s Chuck Todd and MSNBC’s Lawrence O’Donnell charging that the President has “blood” on his hands. MSNBC’s Joe Scarborough blustered: “Trump says he didn’t want Americans to panic. No, he just wanted to sit by and watch them die.”

Over on CNN, anchor Anderson Cooper sneered: “The President was taking another victory lap, yet again. The graves are still fresh but this President ignores them,” while his colleague Don Lemon scolded Trump, “How many people have to die?”

“Rivers of Blood” on Trump’s Hands

“He’s [Donald Trump] a public health menace, and he has rivers of blood on his hands because of what he and these Republican governors have done.”
— Jonathan Alter on MSNBC’s The Last Word with Lawrence O’Donnell, June 26, talking about the President’s response to coronavirus.

“Do you think there’s already — do you think there is blood on the President’s hands, considering the slow response? Or is that too harsh of a criticism?”
— Host Chuck Todd to former Vice President Joe Biden on NBC’s Meet the Press, March 29.

“Mr. Vice President, what is President Trump’s level of culpability, what’s his level of responsibility, say, toward the illness and fatalities we’re witnessing every few minutes these days?”
— Host Brian Williams to former Vice President Joe Biden on MSNBC’s The 11th Hour, March 31.

Self-Important Don Lemon Scolds: “How Many People Have to Die?”

“I swear I feel like I’m in the movie Network. I feel like Howard Beale. Americans are mad as hell. What are you going to — how much more can Americans take? Every single day  [Donald Trump] berating people, lying. First, it’s a hoax. And then ‘All along I knew it was serious, I knew it was a pandemic.’ How much more — how many people have to die?”
— Host Don Lemon on CNN Tonight, April 6.

Trump Doesn’t Care About the Dead

“More than 136,000 of our brothers and sisters, our moms and dads, grandparents and friends are dead….The largest single peacetime loss of life in this country since the 1918 influenza pandemic and no end in sight and today, the President was taking another victory lap, yet again. The graves are still fresh but this President ignores them.”
— Anchor Anderson Cooper on President Donald Trump’s Rose Garden address, as aired on CNN’s AC360, July 14.

“Six months into this lie, nearly 200,000 American souls are dead. Countless, countless, remain ravaged by the aftermath of this horrific disease. Millions still out of work….Donald Trump says he didn’t want Americans to panic. No, he just wanted to sit by and watch them die.”
— Co-host Joe Scarborough on MSNBC’s Morning Joe, September 10.

Trump Is Coming For Your Kids

“now he wants to kill your kids”
— July 8 tweet by Washington Post columnist Jennifer Rubin about President Donald Trump’s desire to re-open schools in the fall.

“Literally Nobody” Has Done “So Much to Kill So Many”

Trump Will Have Killed “More People Than Vietnam War”

“We will see that the Trump administration, because of the character of the person at the top, created a reality distortion field that slowed and warped a response that is going to kill more people than the Vietnam War did.”
— Presidential historian and former Newsweek editor Jon Meacham on PBS’s Amanpour and Company, April 3.

“We are all tired! But mostly I’m tired of the needless sickness and the needless death and the needless terror because this mentally incompetent, inhuman dumb bastard has lied about this disease in a thousand different ways….One dumb bastard! One selfish son of a bitch!...Insisting ‘science is wrong and Fauci is an idiot and only I can save you.’ And insisting ‘You can do whatever you want, then the disease affects almost nobody.’ Donald Trump should be on trial for 220,000 murders! Death penalty for each count!”
— Host Keith Olbermann on his YouTube show, Worst Person in the World with Keith Olbermann, October 20.

More People Are Dead “Because Donald Trump Is President”

“If Biden is serious about winning, he needs to accuse Trump of willingness to kill people.”
— April 9 tweet by Washington Post columnist Jennifer Rubin.

Your “Loved Ones” Are Dying Because of President’s “Foolishness”

“People are dying because of his foolishness. It’s really foolishness at this point. You know, America — you know, folks who loved him, fine. You voted for him. You stuck it to the elites for three years. But now your loved ones can die. The game’s over. This isn’t reality TV anymore. People are dying and this guy is acting a fool.”
— Baltimore Sun media critic David Zurawik on CNN’s Reliable Sources, April 12.

Former CNN contributor Reza Aslan: “Defying medical advice in order to make some kind of point about their support for Donald Trump — this is the kind of behavior — this cult-like behavior that can lead to….the deaths of thousands of people. It’s no longer just a cult of personality….it’s now becoming a doomsday cult.”
Host Joy Reid: “Yeah, it’s terrifying.”
— MSNBC’s AM Joy, April 12.

“If an American president loses more Americans over the course of six weeks than died in the entirety of the Vietnam war, does he deserve to be re-elected?”
— New York magazine’s Olivia Nuzzi to Donald Trump at White House briefing, April 27.