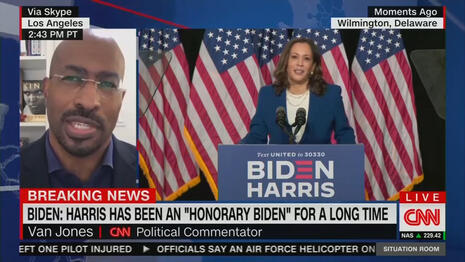 As 2020 comes to a close, NewsBusters is recounting the most obnoxious liberal bias of the year.

In today’s installment, we present the most outrageous examples of journalists fawning over their liberal heroes and left-wing icons. Examples include MSNBC’s Donny Deutsch gushing over Joe Biden: “He’s the perfect guy. He is comfort. We have a drunk driver; he’s the designated driver to get us home.” For CNN’s Van Jones, the Joe Biden-Kamala Harris ticket represented “Hope Reborn.”

In upcoming days, we’ll be showcasing the most horrendous examples of the press playing politics with the pandemic, the media’s most loathsome attacks on Team Trump, the most atrocious cases of Trump Derangement Syndrome, the silliest analysis of the year and the most obnoxious celebrity quotes of 2020.

“It was a beautiful speech. Both of them, they strengthen each other….They’re both steadier together. They’re both stronger together. That was such a beautiful thing to see. I think if you’re going to give a headline today it would be ‘Hope Reborn.’ That’s what I felt. Hope reborn. You just haven’t heard people talking that way about the country and cutting through and seeming authentic...They blew me away. Both of them were stronger today than I’ve seen them in a very long time, if ever.”
— Political commentator Van Jones on CNN’s The Situation Room, August 12.

Time to Give the Keys to “Designated Driver” Joe Biden

“Everybody’s been so worried about Joe Biden, is he the right guy? I think he’s the perfect guy. He is comfort. We have a drunk driver; he’s the designated driver to get us home.”
— Former advertising executive/MSNBC host Donny Deutsch on MSNBC’s Morning Joe, June 8.

Biden Saved the “Republic” and Ended the “Long National Nightmare”

“The deficit of decency, the deficit of hope, the ascendance of fear, the ascendance of selfishness that we have seen in this country will not totally end with any single election, but a single election can surely help. And what was on the ballot here was decency and democracy and empathy and Joe Biden is particularly well-equipped for this moment.”
— Former Newsweek editor, MSNBC presidential historian and current Joe Biden speechwriter Jon Meacham on MSNBC’s live election coverage of Biden speech, November 7.

“Just saying they’re going to do their job and be good stewards of America’s role in this world and focus on American diplomacy, that in and of itself being a rebuke of President Trump...I was talking to a Democrat who just said this also felt like The Avengers, it felt like we are being rescued from this, this craziness we’ve all lived through these past four years and now here are the superheroes to come and save us all.”
— PBS’s NewsHour White House correspondent Yamiche Alcindor on MSNBC’s Deadline: White House, November 24.

“But if you come there in January, and I get to raise my — please answer my question — if I raise my hand, I get to say ‘Madame Vice President.’ Do you know that sends chills through me? And you look like me! Does that give you chills?...I can’t endorse, but what I say is if I get to say ‘Madame Vice President,’ that’s gonna send chills through me. That’s all I’m gonna say!...Go vote everyone!”
— CNN political analyst and White House correspondent for American Urban Radio Networks April Ryan, in an interview with Democratic Vice Presidential nominee Senator Kamala Harris, as streamed on Ryan’s Instagram account, September 21.

Gushing Over the Governor

“His [New York Governor Andrew Cuomo] briefings — articulate, consistent and often tinged with empathy — have become must-see television. On Tuesday, his address was carried live on all four networks in New York and a raft of cable news stations, including CNN, MSNBC and even Fox News. In a sign of the way Mr. Cuomo has become the face of the Democratic Party in this moment, his address even pre-empted an appearance by former Vice President Joseph R. Biden Jr. on ABC’s The View in New York. Mr. Biden called Mr. Cuomo’s briefings a ‘lesson in leadership,’ and others have described them as communal therapy sessions.”
— From New York Times’s daily log of coronavirus coverage, March 24.

“Barack Obama was such a transformative figure for people. And he was for many people our age [millennials] the first president that they really got behind. And he made voting into an act of love.”
— Time magazine journalist and author Charlotte Alter on MSNBC Live, February 18.

CNN anchor Anderson Cooper: “A history-making speech from Kamala Harris and really a history-shaking speech by President Obama, just an extraordinary speech.”...
CNN chief political analyst Gloria Borger: “I have to say that watching Barack Obama, this was not a convention speech, this was sort of the new definition of the ‘fierce urgency of now.’ And I could see him in the Oval Office. It was intimate and it was chilling and he was declaring a national emergency. And what he was doing was saying, ‘I need you to save democracy. Nothing less.’....This was on a higher plane. This was the emergency.”
— CNN’s America’s Choice 2020: Democratic National Convention, August 20.

“What a Legacy!” “Pop Icon” = Things They Never Said About Antonin Scalia

“What a life it was! What a legacy it was!...Justice Ruth Ginsburg, one of those Americans, and there aren’t many, really, who through force of character and her brilliant intellect was able to expand our understanding of  those bedrock constitutional ideals, equality and liberty….Her character, her intellect, her fierce determination to see the words equality and liberty made real for Americans changed America. Overnight crowds gathered on the steps of the Supreme Court to mourn the passing of Justice Ruth Bader Ginsburg at 87 years old. So many young people there, saying goodbye to a most improbable pop icon.”
— Correspondent Terry Moran on ABC’s Good Morning America, September 19.

“Blessed with An Extra Type of Divine Righteousness”

“I was reminded tonight that in the Jewish faith, those who die on Rosh Hashanah are believed to be blessed with an extra type of divine righteousness.”
— Host Brian Williams during MSNBC live coverage of Ruth Bader Ginsburg’s passing, September 18.

“God bless Pete Buttigieg, but he kind of talks at the level of Mr. Rogers and with that composure and poise and he just did it up here on the stage in New Hampshire....He speaks in perfect sentences. It’s impressive. He’s an amazing human being....He is that guy that everybody wanted their kids to be friends with at school.”
— Correspondent Vaughn Hillyard on MSNBC’s live coverage of the New Hampshire Democratic primary, February 12.