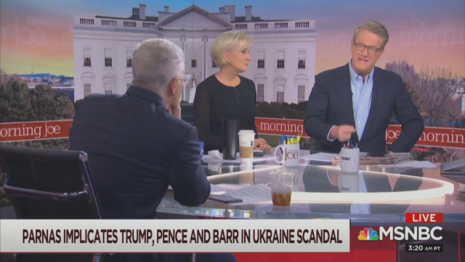 This week, NewsBusters is recounting the most obnoxious liberal bias of 2020. On Monday, we shared some of the most outrageous examples of journalists fawning over liberal or left-wing icons, and yesterday we presented the grossest examples of the media playing politics with the pandemic.

Today’s installment showcases some of the year’s most rancid quotes attacking Republicans or conservatives NOT named Donald Trump but who dared to support him. (The media’s attacks on the President himself will be featured on Thursday.)

MSNBC’s Joe Scarborough warned that any Republican that defended Donald Trump would have their family name scarred for generations. Ex-MSNBCer and current YouTuber Keith Olbermann wanted any and all Trump allies “removed from society.”

CNNers Don Lemon and Wajahat Ali laughed it up as NeverTrumper Rick Wilson mocked the “boomer rubes” who voted for the President.

If You Defend Trump Now, Your Family Name Shall Be Shamed Forever

Throw Them All In Jail!

“We want the prisons so filled with Trumps and Trump flunkies and Trump apologists and Trump enablers that we have to convert Trump buildings into new God-damned Trump prisons!”
— Thanksgiving message from Keith Olbermann on his YouTube show Worst Person In the World with Keith Olbermann, November 24.

Only Bible-Believing “Boomer Rubes” Would Vote for Trump

Republican strategist Rick Wilson: “Donald Trump couldn’t find Ukraine on a map if you had the letter ‘U’ and the picture of an actual physical crane next to it. He knows that this is a, you know, an administration defined by ignorance of the world, and so that’s part of him playing to their base and playing to their audience, you know, the credulous boomer rube demo that backs Donald Trump — that wants to think that ‘Donald Trump’s the smart one, and y’all — y’all elitists are dumb!’”
CNN contributor Wajahat Ali: “You elitists with your geography and your maps and your spelling!”
Wilson: “Your math and your reading!”
Ali: “Yeah, your reading, you know, your geography, knowing other countries, sipping your latte!”
Wilson: “All those lines on the map!
Ali: “Only them elitists know where Ukraine is! Sorry, I apologize.”
Host Don Lemon: “Oh, my God!...hold on. That was good, sorry. Rick, that was a good one – I needed that....A ‘U’ with a crane on it — that is hilarious.”
— CNN Tonight, January 25.

“I want to read you guys a letter to the editor that we found in the Lexington Herald-Leader. It was a fascinating attempt at trying to explain why some people support President Trump. Here’s what he says: ‘Why do good people support Trump? It’s because people have been trained, from childhood, to believe in fairy tales. This set their minds up to accept things that make them feel good. The more fairy tales and lies he tells, the better they feel. Show me a person who believes in Noah’s Ark, and I will show you a Trump voter.’ Look, this gets at something...that my executive producer likes to say, is ‘Hey, voters want to be lied to, sometimes. They don’t, they don’t always love being told hard truths.’”
— Host Chuck Todd on NBC’s Meet the Press, December 29, 2019.

Only One Possible Reason Trump Supporters Still Trust Him…

“Trump can be and must be expunged….The task is twofold. The terrorist Trump must be defeated, must be destroyed, must be devoured at the ballot box and then he and his enablers and his supporters and his collaborators and the Mike Lees and the William Barrs and the Sean Hannitys and the Mike Pences and the Rudy Giulianis and the Kyle Rittenhouses and the Amy Coney Barretts must be prosecuted and convicted and removed from our society while we try and rebuild it and to rebuild the world Trump has nearly destroyed by turning it over to a virus.”
— Host Keith Olbermann on his YouTube show, Worst Person In the World with Keith Olbermann, October 8.

“Rush Limbaugh recently said he has lung cancer. There are a lot of people in the Republican party who love Rush Limbaugh. But for Democrats and a lot of people, independents and African-Americans, he’s just seen as someone who is the face of racism, frankly.”
— PBS NewsHour correspondent Yamiche Alcindor on conservative radio talk show host Rush Limbaugh being awarded the Presidential Medal of Freedom as aired on MSNBC’s State of the Union coverage, February 5.

GOP = The Apartheid Party of America

“The Republican Party is sort of morphing into the National Party in South Africa in the 1980s, it’s ‘we’ll defend white America’s privileges, but you have to be really afraid that the black people are coming for you, so you have to stick with us and stay with the team.’ It’s a strategy.”
— Host Joy Reid on MSNBC’s AM Joy, July 11.

“I watched the Republican convention, and seeing the slew of black speakers that they had, it really did look like a modern-day minstrel show to me.”
— Host Tiffany Cross on MSNBC’s AM Joy, August 30.