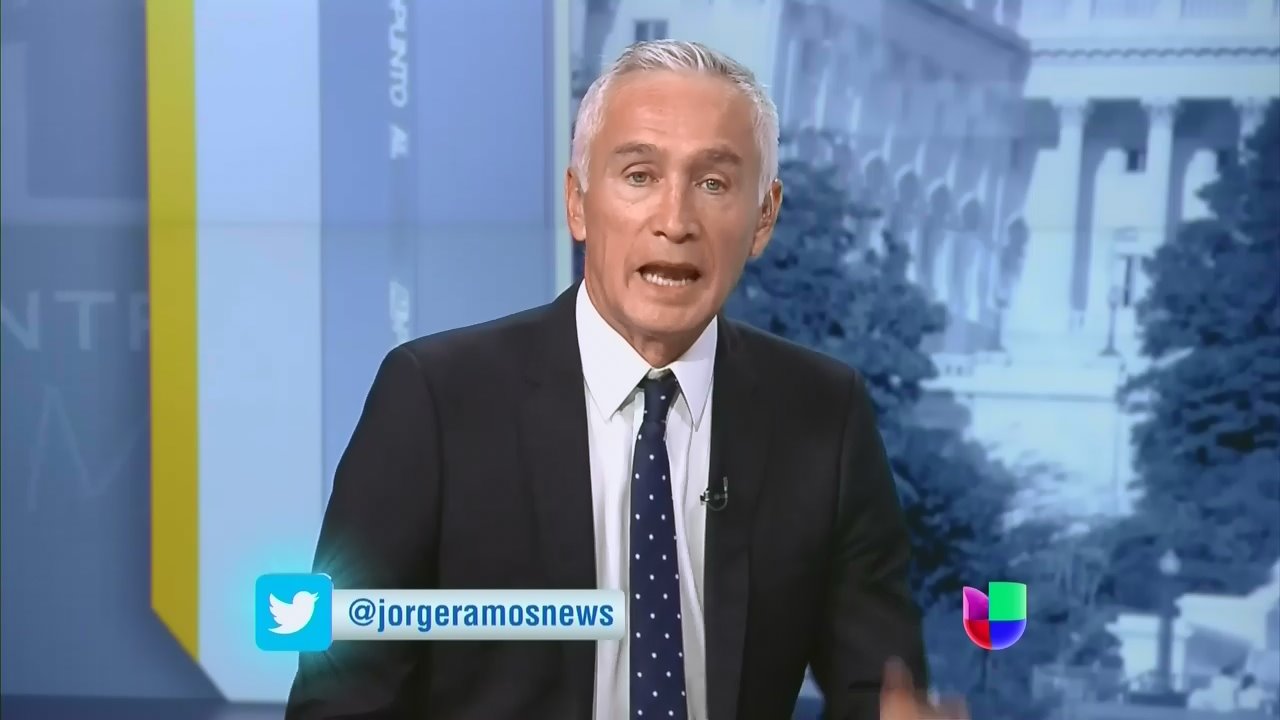 UPDATE: CNN debate moved from Arizona to Washington DC. Ramos removed from moderator panel, due to possible exposure to coronavirus.

One of the lead debate moderators for CNN’s Sunday night debate is Univision anchor Jorge Ramos – a journalist so opposed to Donald Trump he was actually thrown out of a 2015 campaign event for being so rude. After Trump won on election night 2016, Ramos vowed to “Resist and report and not be neutral.”

Since then, Ramos and his network Univision have railed against Trump on immigration and fueled the rise of the most left-wing candidate in the race – the openly socialist Senator Bernie Sanders. Ramos has soft-pedaled Sanders’ version of socialism as he asserted: “Most democratic socialists aren’t advocating for a government takeover. They simply want a level playing field for everyone to succeed.”

At the September 12, 2019 ABC News debate, Ramos set-up Sanders to explain the “differences between your kind of socialism and the one being imposed in Venezuela, Cuba and Nicaragua.” Conversely – at that same debate – Ramos hit Joe Biden from the left as too tough on immigration as he prodded: “Are you prepared to say tonight that you and President Obama made a mistake about deportations? Why should Latinos trust you?”

The following are the most obnoxious outbursts from Ramos during the Trump era:

Pushing Democratic Candidates to the Left

“Vice President Biden, as a presidential candidate, in 2008, you supported the border wall, saying: ‘Unlike most Democrats, I voted for 700 miles of fence.’ This is what you said. Then you serve as Vice President in an administration that deported 3 million people, the most ever in U.S. history. Did you do anything to prevent those deportations?...Are you prepared to say tonight that you and President Obama made a mistake about deportations? Why should Latinos trust you?”
— Univision anchor Jorge Ramos question to former Vice President Joe Biden at ABC’s Democratic debate, September 12, 2019.

“Senator Sanders has committed to introducing immigration reform during his first 100 days as president, which would legalize millions of undocumented (immigrants). Can you commit to doing the exact same thing?...So can you commit to doing it within the first 100 days?”
— Univision anchor Jorge Ramos to Democratic Senator Elizabeth Warren on Univision’s Al Punto on Sunday, February 9, 2020. [As translated from the original Spanish]

Setting Up Sanders to Sell His Brand of Socialism

“Senator Sanders, one country where many immigrants are arriving from is Venezuela. You admit that Venezuela does not have free elections, but still you refuse to call Nicolas Maduro “un dictador,” a dictator. Can you explain why? And what are the differences between your kind of socialism and the one being imposed in Venezuela, Cuba and Nicaragua.”
— Univision anchor Jorge Ramos question to Senator Bernie Sanders at ABC’s Democratic debate, September 12, 2019.

“Democratic socialism is different from traditional socialism. Traditional socialism calls for a state-run economy with no free-market capitalism....But younger generations tend to think of socialism as a system of basic guarantees, protections, and rights for all workers, children, the elderly, and the environment. Most democratic socialists aren’t advocating for a government takeover. They simply want a level playing field for everyone to succeed.”
— Univision anchor Jorge Ramos in an April 4, 2019 post from the Real America with Jorge Ramos official Facebook page.

“Why, in the year 2020, is it still so difficult for a woman to become President of the United States? This has already happened in many Latin American countries, but we haven’t been able to do so in this country? Why?”
— Anchor Jorge Ramos to Democratic Senator Elizabeth Warren on Univision’s Al Punto on Sunday, February 9, 2020. [As translated from the original Spanish]

Univision’s Own Version of Adam Schiff

“The quid pro quo Trump proposed to the Ukrainian president seems quite straightforward: Give me information on my possible opponent in the 2020 presidential race, and I'll give you the money. It's as simple as that. You give me what I want, and I'll give you what you need. This is a bully demanding loyalty and obeisance....As he attempts to protect this sham notion of himself as a perpetual champion, the U.S. president is losing his battle with history. He will always be remembered as the bully who was caught red-handed. Worse, we can't help but wonder if, given the opportunity, Trump wouldn’t just cheat again.”
— Univision anchor Jorge Ramos in a January 29, 2020 column posted on his official website JorgeRamos.com.

“The fact is that Republicans with this negotiation, they want to change the essence, I think, of the United States. I mean, do they really want to make America white again?...Is that the deal?”
— Univision anchor Jorge Ramos, discussing immigration legislation, on CNN’s AC360, February 12, 2018.

Wall = “Symbol of Hate and Racism”

“Mr. Trump is not the first president to ask for money for a wall. George H.W. Bush, Bill Clinton and George W. Bush built fences and walls along the southern border. Barack Obama maintained the resulting system of roughly 700 miles of physical barriers. So why don’t we want Mr. Trump to build his wall? What is different? The difference is that Mr. Trump’s wall is a symbol of hate and racism.”
— Univision anchor Jorge Ramos in a January 9, 2019 New York Times op-ed.

Rooting for “Wonderful” Rudeness Against Conservatives

“There’s an entire current within the United States that has emerged in opposition to Donald Trump but that are doing wonderful things. You have the Dreamers, these kids that arrived here undocumented, that have organized wonderfully, that go into senators’ and congressmens’ offices. They don’t allow them to eat in restaurants and harass them wherever they go.”
— Univision senior news anchor Jorge Ramos on Spain’s El Intermedio, November 13, 2018. (As translated from original Spanish broadcast.)

Election Night Plan: “Resist and Report and Not Be Neutral”

“When he won, I said it as if I was reporting a football score or a soccer match. ‘Donald Trump is going to be the next president of the United States.’ No emotion. Just the facts....I’ve been to wars, I’ve covered the most difficult situations in Latin America. But I needed to digest and to understand what had happened. I came home very late. I turned on the news. I had comfort food — cookies and chocolate milk — the same thing I used to have as a kid in Mexico City....Once I digested what had happened with Trump and had a plan, which was to resist and report and not be neutral, then I was able to go to bed.
— Univision anchor Jorge Ramos discussing his reaction to Trump’s 2016 Election Night win, as reported in November 6, 2017 Esquire article “The Untold Stories of Election Day 2016 What really happened?”

Trump is So Bad, “Neutrality Is Not An Option”

“It doesn’t matter who you are – a journalist, a politician or a voter – we’ll all be judged by how we responded to Donald Trump. Like it or not, this election is a plebiscite on the most divisive, polarizing and disrupting figure in American politics in decades. And neutrality is not an option. The day after the election will be too late....If a candidate is making racist and sexist remarks, we cannot hide in the principle of neutrality. That’s a false equivalence....Judgment day is coming. Will you have peace of mind come November 9th?”
— Univision anchor Jorge Ramos in August 23, 2016 piece for Time magazine.