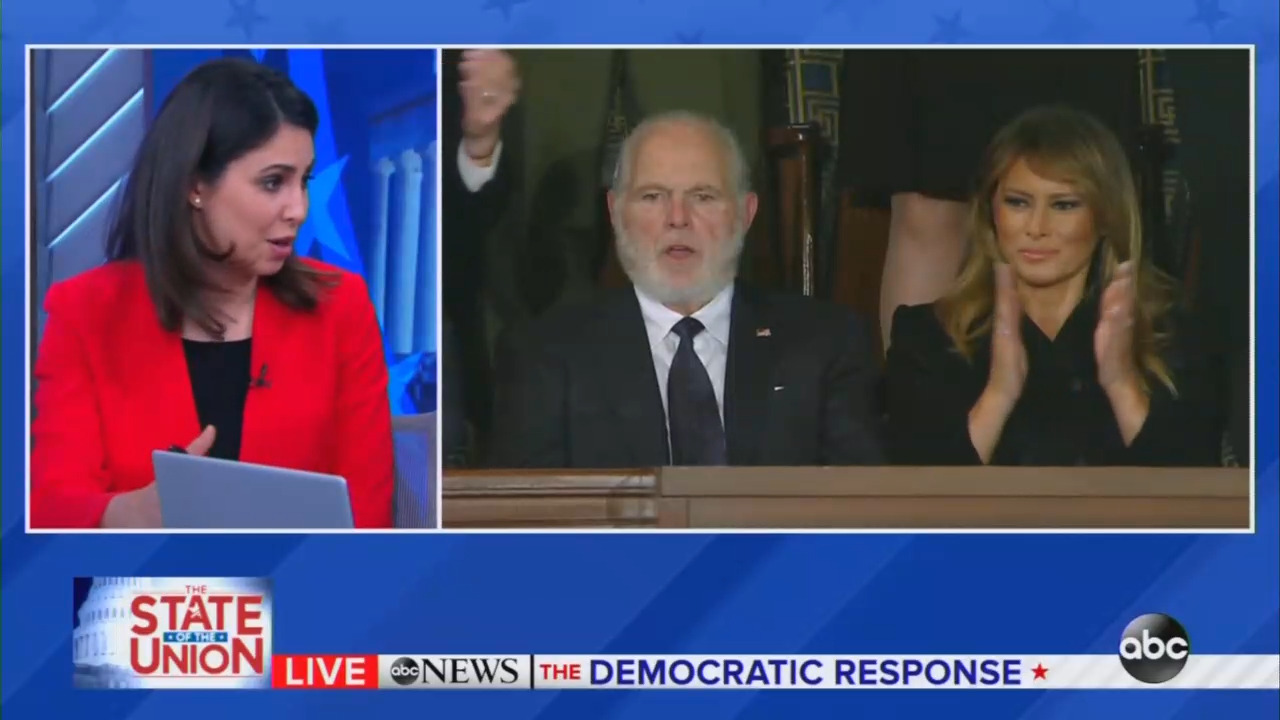 Legendary conservative talk show host Rush Limbaugh received an honor of a lifetime when President Donald Trump presented him with the Medal of Freedom at Tuesday’s State of the Union address.

But his haters in the liberal media couldn’t let Limbaugh – who just announced he is battling advanced lung cancer – have this one heartwarming moment for his family and millions of fans to savor without attacking him as an undeserving racist.

ABC anchor George Stephanopoulos called the honor a “controversial move.” His colleague correspondent Cecilia Vega added that the “divisive” Limbaugh’s “past comments on race, whose past comments on women are already making the rounds on Twitter....Many offended by this.” NBC’s Meet the Press moderator Chuck Todd belittled the move as Donald Trump “trolling the Democrats” and sticking “a finger-in-the-eye” of House Speaker Nancy Pelosi.

CNN host Chris Cuomo questioned the appropriateness of honoring Limbaugh on the same stage as the Tuskegee Airmen: “How are you really honoring what the Tuskegee Airmen represent if you have Rush Limbaugh in the same ceremony?” Also on CNN, White House correspondent Jim Acosta bemoaned: “While, yes, he [Trump] was trying to make appeal to the African-American community it can’t be forgotten he was awarding the Medal of Freedom to Rush Limbaugh who has a history of making derogatory comments about African-Americans.”

That accusation by Acosta sparked longtime Limbaugh producer Bo Snerdley to go to his Twitter account to debunk Acosta and other liberals’ claims of racism.

The following are just some of the most classless attacks (so far) from liberal journalists and celebrities offended by Limbaugh receiving the Medal of Freedom:

“Rush Limbaugh. Someone who is a birther received the Presidential Medal of Freedom. And I watched Twitter and people were very upset. And does this all equate to the President’s inclusive society?”
— CNN political analyst and American Urban Radio Networks White House correspondent April Ryan during post-State of the Union coverage as aired on CNN’s Cuomo Prime Time, February 5.

“Yes the President had some heartwarming moments during this speech but he was also engaging in some deeply divisive rhetoric aimed at immigrants, aimed at Latinos. And while, yes, he was trying to make appeal to the African-American community it can’t be forgotten he was awarding the Medal of Freedom to Rush Limbaugh, who has a history of making derogatory comments about African-Americans.”
— Correspondent Jim Acosta on CNN’s post-State of the Union coverage, February 4.

Host George Stephanopoulos: “Something you’ve never seen before: a congressional medal of honor [sic] given out during the State of the Union for Rush Limbaugh, the talk radio host. That’s certain to be a controversial move.”
Correspondent Cecilia Vega: “This was completely an unprecedented move that just appeared in there, awarding that Presidential Medal of Freedom, not just in the chamber, but to someone as controversial and divisive as Rush Limbaugh who past comments on race, whose past women are already making the rounds on Twitter. People are, many offended by this.”...
Correspondent Pierre Thomas: “Seeing that African-American general who was honored by the President tonight and then having Rush Limbaugh honored in the same way was just another reminder of just how divided the country truly is.”
— ABC News post-State of the Union coverage, February 4.

“Can’t find the words to express my pain and disgust at seeing Rush Limbaugh receive the nation’s highest honor in the house that my ancestors built. But in their name, I say that this is not the end. We will overcome this hate and live to see a better day. This too shall pass.”
— February 4 tweet by New York Times editorial board member Mara Gay.

“Ask yourself this simple question: is the world a better place or a worse place with Rush Limbaugh in it?”
— February 3 tweet by former CNN host Reza Aslan.

Co-host Joy Behar: “There he is talking to the black community and gives Rush the medal, and Rush Limbaugh spent a lot of Obama’s tenure singing – what did he call it? ‘Barack the magic Negro.’ He’s been so racist and so misogynistic over the years, to give him – who’s next? Roger Stone? How about giving it to him or Steve Bannon!”
Co-host Sonny Hostin: “I don’t think it was lost on the black community that he gave that honor to Rush Limbaugh during black history month, sitting next to a Tuskegee airman on Rosa Parks’ day while Rush Limbaugh was a long-time birther, during the Obama administration, played that magic Negro on his show several times. So, you know don’t talk to me about what you’ve done for the black community!”
— Co-hosts Joy Behar and Sonny Hostin discussing a Limbaugh song parody that mocked liberal Los Angeles Times columnist David Ehrenstein's March 19, 2007 column “Obama the ‘Magic Negro,’” as aired on ABC’s The View, February 5. 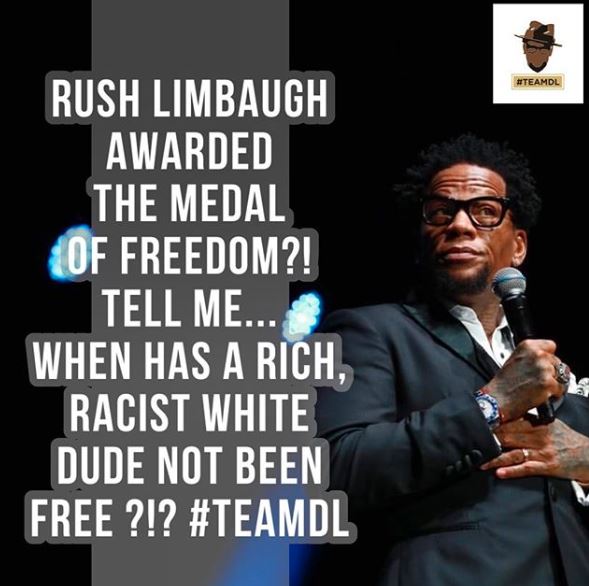 “Only one thing to say about Rush Limbaugh getting a Presidential Medal if Freedom at The State of the Union: I loathe this fucking man.”
— February 4 tweet by film director Rob Reiner.

“I hope Rush Limbaugh gets the best medical treatment and recovers quickly. And I hope that while he is doing it he thinks about why he doesn’t think poor people deserve the same thing.”
— February 3 tweet by actor Jon Cryer.