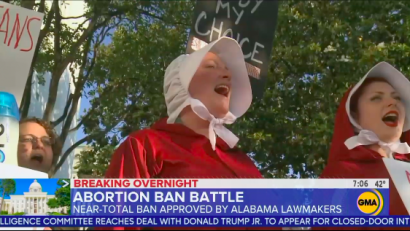 Network anchors and reporters are currently freaking out over Georgia, Alabama and Missouri passing laws designed to protect the rights of the unborn, having already devoted almost an hour (59 minutes, 38 seconds) of coverage (May 7-16) to the these new laws.

But when New York passed a radical law legalizing late term abortions back in January the networks didn’t care at all - spending zero seconds on the bill signed into law by liberal New York Governor Andrew Cuomo.

Back in January the networks also shirked off Virginia Democratic Governor Ralph Northam’s support of a failed state bill that would have allowed abortions to be carried out on a child that had been fully “delivered.” This is in sharp contrast to how the nets have covered legislation that are – in part – a response to the liberal actions in New York and Virginia.

From the morning of May 7 (when Georgia Governor Brian Kemp signed the Life Act into law) through the morning of May 16 (After Alabama Governor Kay Ivey signed that state’s new law and Missouri’s senate passed its abortion bill) the networks filled their evening and morning shows with hand-wringing over what this meant for Roe v. Wade.

On May 15 NBC Nightly News anchor Lester Holt decried how “46 years after the U.S. Supreme Court ruled abortion a constitutional right, the state of Alabama has just openly defied that landmark decision.” On the May 16 edition of NBC’s Today show correspondent Pete Williams called the Alabama bill a “blunt force attack on Roe v. Wade.”

Using terms like “extreme” and “controversial,” reporters framed these laws as “restrictive” to women’s rights – as opposed to “protective” of the rights of the unborn. Throughout their coverage the networks demonstrated their usual hostility to the pro-life side of the abortion debate, the kind regularly seen in their annual reluctance to cover the March for Life protests.

On the May 15 edition of CBS This Morning, correspondent Jericka Duncan worried the Alabama bill would “disproportionately” “endanger” minority women who lack access to health care. She also sat down with an abortion activist who ran one of the state’s abortion clinics. Her shirt read, “Everyone loves someone who had an abortion.”

On the May 15 Today, NBC correspondent Kerry Sanders touted the “backlash” these pro-life bills were facing, pointing out Hollywood production companies and actors who were boycotting Georgia because of their recently passed heartbeat law.

On the May 13 edition of CBS This Morning correspondent Jan Crawford denounced: “These state laws are just coming too fast and they are too extreme.”

Back on the May 7 edition of CBS This Morning co-host John Dickerson described the Georgia legislation, which bans most abortions after six weeks, this way: “This morning, Georgia Governor Brian Kemp is expected to sign one of the most restrictive and controversial anti-abortion laws in the country.”