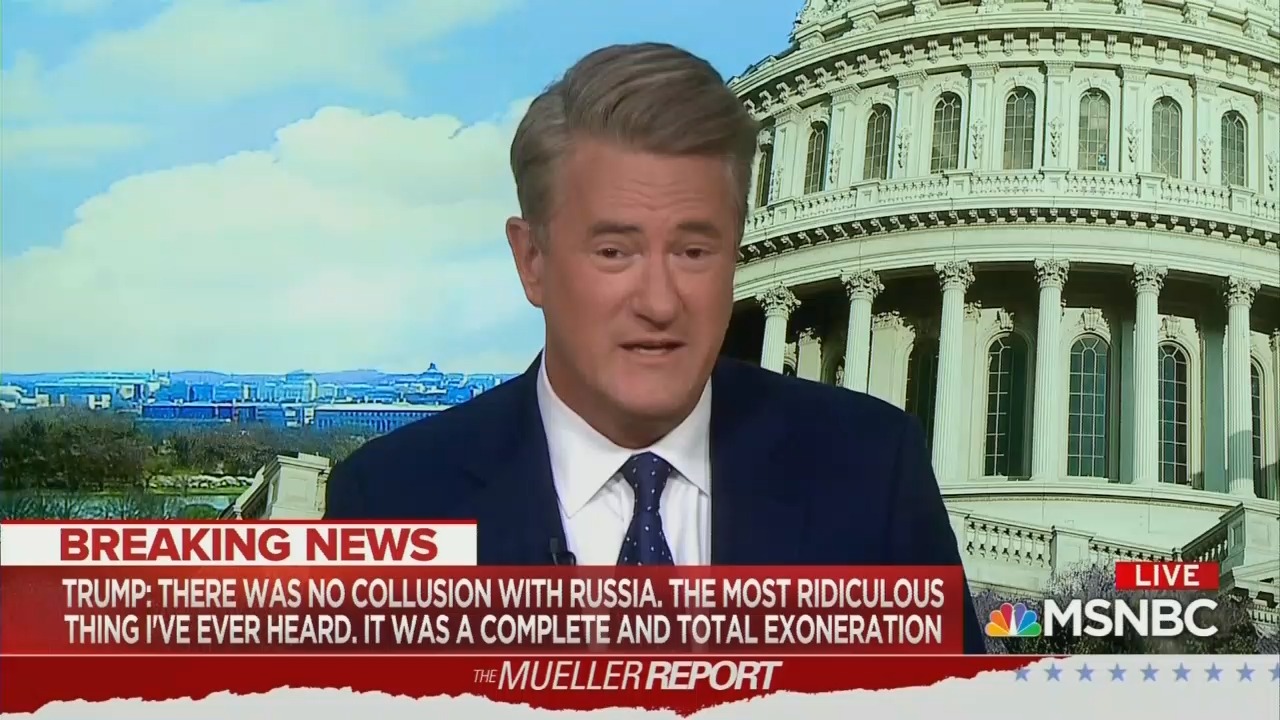 Many in the media remain in denial about the Mueller report findings, as they’ve collectively screamed “Nothing is over, until we decide it is!”

From clinging to ongoing Democratic investigations to spouting conspiracy theories about a cover-up, liberal journalists and hosts have spent the last few days refusing to accept there was nothing to their precious “Russian Collusion” dreams.

These people really need help, the kind they can receive with this special offer from the MRC.

The following are the 10 worst examples of liberals in denial as they curse the Mueller Report conclusions:

Joe Cries: There Is More of “Onion to Unpeel”

“If Donald Trump had nothing to worry about all along, why did the President lie about his contacts with Russia repeatedly during the campaign? Why did the Vice President lie about their contacts with Russia in January of 2017? Why did the Attorney General lie in front of the United States Senate about his contacts?... How about the meeting on Air Force One where Donald Trump has everybody around him saying, ‘Okay this is how we’ll lie about our meeting with the Russians?’...There is more of that onion to unpeel.”
— Co-host Joe Scarborough on MSNBC’s Morning Joe, March 25.

Trump Lies Everyday, He Has to Be Guilty!

“You’re going to hear this from the right for the next days and weeks to come, that the press has made all of this up to take down President Trump. But the press is just following a trail that Trump created. He has proven time and time again that he cannot be trusted. He is so dishonest that even America’s allies don't know what to believe....Maybe every time he said no collusion more than 231 times so far, maybe every time he said no collusion he was telling the truth. Maybe that’s what Mueller found. If so it would be a relief for the country. But Trump’s daily deceptions have given this country ample reason to be suspicious. That’s why there is so much noise.”
— Host Brian Stelter on CNN’s Reliable Sources, March 24.

“The fact that this investigation takes place within the Justice Department which Donald Trump essentially controls and he got rid of the problem, Jeff Sessions, who the one decent thing that he did was recuse himself, this guy is not recused [Attorney General William Barr], it feels like the seeds of a cover-up are here.”
— Host Joy Reid on MSNBC’s AM Joy, March 23.

How Dare Mueller Let Trump “Off the Hook”

“We know about the meeting in Trump Tower, June of 2016. We know about the meeting at the cigar bar with [Ukranian political consultant Konstatin] Kilimnik. We know – my God, we know about all those meetings with [Russian ambassador] Sergey Kislyak at the Republican convention in Cleveland. All of these dots, we’re now to believe, don't connect?...Why was there never an interrogation of this President?...How can they let Trump off the hook?”
— Host Chris Matthews on MSNBC’s Hardball, March 22.

“He wasn’t investigated for the first two years at all! So, I think, there’s a little catch up to do in this.”
— Chief political analyst Matthew Dowd on ABC’s This Week, March 24.

Co-host Joy Behar: “I don’t buy that he is completely exonerated the way he just said.”...
Co-host Sunny Hostin: “We don’t know anything....We only know what’s in this four-page memo written by the Attorney General that was selected by President Trump. That’s all that we know....I think everybody needs to pump the brakes when we talk about this being a huge victory for this administration, because there has been a complete lack of transparency here.”
— ABC’s The View, March 25.

“I want to hear him [Mueller] tell me why the ‘Russia if you’re listening’ speech was....a joke? Did he accept the changing of the Georgian platform as a joke? The handing off of data to Konstantin Kilimnik, a GRU, you know, asset as a joke? Somebody’s got to explain these things. And if it was ‘I couldn’t get a 100 percent slam dunk’ then the Russians have clearly won on a very well planned and coordinated operation, even by Mr. Mueller’s standards.”
— MSNBC counter-terrorism analyst Malcolm Nance on MSNBC’s The Beat, March 24.

“There is a direct quote that Mueller has said it does not exonerate the president. Now, I happen to look at that as kind of ‘a Mueller maybe,’ which to me is really atrocious. After two years, if you still have questions, when you still can’t answer that question, it’s not good enough...I’m completely unsatisfied.”
— CNN legal analyst Laura Coates on CNN New Day, March 25.

Don’t Need Mueller Report to Know Trump Is a Traitor