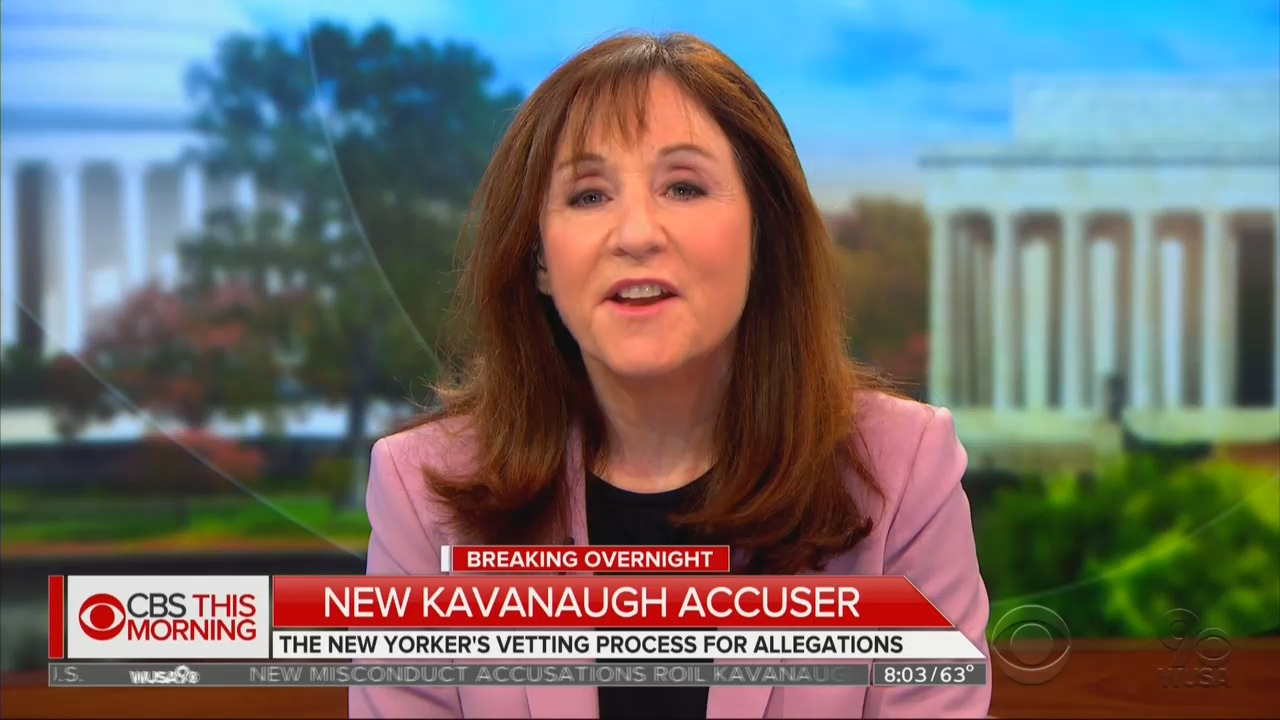 Jane Mayer made the network rounds, this week, promoting her New Yorker hit piece on Brett Kavanaugh, but a look at her past demonstrates why her work should be taken with biggest grains of salt as she has become a go-to author for partisan attack stories.

Mayer’s September 23 article (co-written with Ronan Farrow) “Senate Democrats Investigate a New Allegation of Sexual Misconduct, from Brett Kavanaugh’s College Years” is the just the latest in a long list of hit pieces against conservatives.

Back in 2017 Mayer set her sights on the Vice President in her article for the October 23, 2017 issue of the New Yorker “The Danger of President Pence: Trump’s critics yearn for his exit. But Mike Pence, the corporate right’s inside man, poses his own risks.”

Mayer promoted the piece on the October 19, 2017 edition of MSNBC’s Andrea Mitchell Reports where she ominously declared: “I went to Indiana and I spent a couple months, really I interviewed 60 people or so about him, and came away worried, I have to say. He is a candidate who’s been sponsored by some of the biggest and most powerful private interests in the country.”

On the March 3, 2016 edition of ABC’s The View, Mayer showed up to promote her anti-Koch brothers book Dark Money where she accused Charles and David Koch of supporting conservative policies for their own gain. When show co-host Paula Faris challenged: “Aren’t there billionaires on the left that are also – I mean, George Soros, you have Michael Bloomberg. I mean, in their defense you also have billionaires on the other side” Mayer ridiculously responded that Bloomberg was “in the middle,” and that Soros and Bloomberg were “not such big money by comparison” to the “big money” Koch brothers.

Prior to Dark Money, Mayer, in 2010 went after the Kochs in her August 30, 2010 New Yorker story “Covert Operations: The billionaire brothers who are waging a war against Obama.” In the article Mayer let leftist Charles Lewis, founder of Center for Public Integrity smear the brothers: “The Kochs are on a whole different level. There’s no one else who has spent this much money. The sheer dimension of it is what sets them apart. They have a pattern of lawbreaking, political manipulation, and obfuscation. I’ve been in Washington since Watergate, and I’ve never seen anything like it. They are the Standard Oil of our times.”

In 2008, Mayer’s book The Dark Side: The Inside Story of How the War on Terror Turned into a War on American Ideals landed her a guest spot on CBS’s The Late Show where David Letterman had a friendly chat with Mayer about George W. Bush’s “war crimes.”

Mayer first enjoyed the liberal limelight when she (along with co-author Jill Abramson) released her anti-Clarence Thomas book in 1994. The book Strange Justice: The Selling of Clarence Thomas was such a hit with the left, Mayer and company were rewarded with Showtime turning it into a 1999 movie.