Trump Faces Tag Team of Cooper and Raddatz at Next Debate 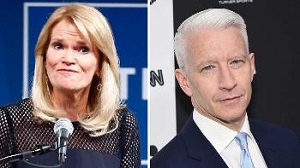 If Donald Trump thought he was in a two-to-one fight at the last presidential debate (Hillary Clinton and debate moderator Lester Holt) he should be prepared for a three-to-one fight on Sunday night. In addition to his Democratic opponent, Trump will be going up against CNN anchor Anderson Cooper and ABC reporter Martha Raddatz. A look at their careers shows they both have a tendency to lean left.

The CNN anchor once called the current Democratic frontrunner the “queen of compromise,” but disgustingly depicted Republicans as a political party preoccupied with “teabagging.” And as the Weekly Standard pointed out, Cooper was listed as a “notable past member” on the Clinton Global Initiative’s website.

From praising Clinton’s infamous Benghazi testimony as “charming” and “disarming” to wondering what to call the new grandmother “Maybe Glam-Ma?” Raddatz has shown a soft-spot for the former Secretary of State. The ABC News reporter, also hosted Barack Obama as a guest at her 1991 wedding to the man who would later become President Obama’s FCC commissioner Julius Genachowski,

The following are just some of the worst examples of Cooper and Raddatz’s liberal bias from the MRC’s archive:

Hillary is the “Queen of Compromise”

“Most Americans of course, stand stubbornly in the middle, as has Clinton, at least for the four years she’s been in the Senate. She’s lost the vast right-wing conspiracy rap, changing into a queen of compromise, eager to reach across the aisle – a successful strategy so far.”
— CNN’s Anderson Cooper on Anderson Cooper 360, June 7, 2005.

CNN analyst David Gergen: “Republicans are pretty much in disarray....They have not yet come up with a compelling alternative, one that has gained popular recognition. So-”
Anchor Anderson Cooper: “Teabagging. They’ve got teabagging.”
Gergen: “Well, they've got the teabagging....[But] Republicans have got a way - they still haven’t found their voice, Anderson. They’re still – this happens to a minority party after it’s lost a couple of bad elections, but they’re searching for their voice.”
Cooper: “It's hard to talk when you’re teabagging.”
— CNN’s Anderson Cooper 360, April 14, 2009.

“Like other Planned Parenthood clinics, this one in Colorado Springs provides a range of health care services to women, including abortions, and, as we said, the suspect mentioned baby parts to investigators, as well as anti-abortion, anti-government views. The attack comes as abortion has once again become a white-hot issue on the campaign trail fueled in part by controversial videos made by an anti-abortion group about Planned Parenthood....To that point, you said earlier today, you said, ‘Hateful rhetoric and words and harassment of doctors and harassment of women going to health centers have real implications.’ And you’ve said, quote, that you’ve ‘never seen the kind of rhetoric that we've seen from presidential candidates.’ Do you directly link the rhetoric that you're hearing from presidential candidates to what happened?...You believe some of the language that has been used is not only inappropriate, but you believe it can and maybe has led to violence?”
— Anchor Anderson Cooper’s questions to Planned Parenthood president Cecile Richards on CNN’s Anderson Cooper 360, November 30.

“Do you worry about using language accusing gay people of trying to do harm to the people of Florida when doesn't that send a message to some people who might have bad ideas in mind?...You for years were fighting that very idea, isn’t there a sick irony in that?....I’m just wondering though, is it hypocritical to portray yourself as a champion of the gay community when —  I'm just reflecting what gay people told me they don't see you as this....It's just that —  I will say I have never really seen you talk about gays and lesbians and transgender people in a positive way until now. I read your Twitter history for the last year and I saw you tweeting about, you know, national dog month and national shelter dog appreciation day or adopt a shelter dog month. It is gay pride month. You never even tweeted about gay pride month.”
— CNN anchor Anderson Cooper’s questions to Florida Attorney General Pam Bondi on the Orlando club shooting, June 14.

“At issue now, a video of a sermon given by Barack Obama’s minister at the Trinity United Church of Christ in Chicago....We’re running it because — like it or not, legitimate or not — it has become an issue....All this seems to have nothing to do with actual issues that the country is facing, which these candidates should be talking about and we probably should be talking about.”
— CNN’s Anderson Cooper introducing a story about inflammatory comments made by Rev. Jeremiah Wright, Anderson Cooper 360, March 13, 2008.

“We begin with tough talk on the campaign trail today — tough talk, an apology, a disavowal, and now, questions whether what you’re about to hear is a taste of sleazy campaigning and Swift Boating to come....Clearly, for a two-bit radio host, this is the biggest thing to happen to him in quite a long time.”
— CNN’s Anderson Cooper discussing conservative talk show host Bill Cunningham uttering Barack Obama’s middle name Hussein, on Anderson Cooper 360, February 26, 2008.

Raddatz to Hillary on First Spouses; “Is It Time to Change the Role?”

“And we’re going to make a very sharp turn as we wrap things up here. Secretary Clinton, First Ladies, as you well know, have used their position to work on important causes like literacy and drug abuse, but they also supervise the menus, the flowers, the holiday ornaments and White House decor. I know you think you know where I’m going here. You have said that Bill Clinton is a great host and loves giving tours, but may opt out of picking flower arrangements if you’re elected. Bill Clinton aside, is it time to change the role of a President’s spouse?”
— ABC’s Martha Raddatz question to Hillary Clinton at Democratic debate, December 19.

“You believe that Hillary Clinton started the birther movement?...What is the proof because we can’t find any. And fact-checkers have checked into that....The reports of people in my industry say there is no proof they can find that Hillary Clinton had anything to do with it.”
— ABC’s Martha Raddatz interviewing GOP vice presidential nominee Mike Pence on This Week, September 18.

“The story she read her, the dinner table conversation, all that rich detail, just the kind of detail we got the other night, and, of course, there's the reason for that. She wants the voters to know who she is. Voters need to know, is she like us? And there's nothing more relatable than being a mother or grandmother.”
— ABC’s Martha Raddatz after Hillary Clinton’s acceptance speech on ABC’s live Democractic convention coverage, July 28.

“Very important question: What do you think Hillary Clinton should be called as a grandma?...I say maybe ‘Glam-Ma.’ Maybe ‘Glam-Ma?’”
— Fill-in host Martha Raddatz to the roundtable, ABC’s This Week, April 20, 2014.

“It was truly a riveting day on Capitol Hill. We don’t say that very often, with Secretary Clinton as some have never seen her before. She was at times, combative, charming, disarming and clearly ready for a fight.”
— ABC correspondent Martha Raddatz on Good Morning America, January 24, 2013.

Raddatz Hails Hillary: “She Comes Out Swinging” on Benghazi

Fill-in anchor David Muir: “Tonight, more signs Hillary Clinton is mulling a presidential run and is ready to fight back on Benghazi. With a new book coming, Politico tonight reporting she’s taking on her critics....”
Correspondent Martha Raddatz: “According to the online publication, she comes out swinging. Her anger aimed at congressional Republicans who she accuses of politicizing the tragedy. ‘I will not be a part of a political slugfest on the backs of dead Americans,’ writes Clinton....”
— ABC’s World News, May 30, 2014.

“Let’s face it, Hillary is cool. Trending. From the dancing and drinking photos during her trip to Colombia, to the iconic shot of the secretary texting on her C-17. When bloggers made up a few scenarios, telling the President and Vice President to get back to work. Rejecting a friend request from Facebook's Mark Zuckerberg, Clinton weighed in with real texts. ‘Rolling on the floor laughing.’ ‘Scrunchie time.’ Ahh, the scrunchie. Those were the days when staff would cringe at Hillary's desire to pull her hair back. The days that eventually led to the glamorous First Lady, the evolving hair styles. Never the same one twice, it seemed. And then, to the buttoned-up candidate Clinton. You know, the polarizing one. But not anymore. Her latest approval rating is 65 percent. Just behind that fashion icon, Michelle Obama.”
— ABC’s Martha Raddatz on Good Morning America, May 9, 2012.