Charlie Rose to Hillary: Is ‘Trump The Most Dangerous Man to Ever Run for President?’ 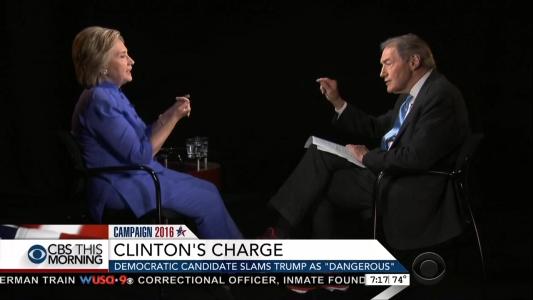 Charlie Rose, in an interview aired on Tuesday’s CBS This Morning, let Hillary Clinton rant against Donald Trump as he set-up Clinton with questions like “Do you believe Donald Trump is dangerous?” and “Donald Trump with his finger on a nuclear bomb would be a threat to civilization?”

The CBS co-anchor didn’t challenge Clinton’s slams on Trump but merely repeated her attacks on him back to her, so she could re-assert them.

First up, Rose questioned the Democratic presidential nominee: “Do you believe Donald Trump is dangerous? Do you believe Donald Trump is not fit to be president?” To which Clinton responded with a list of charges including her assertion that she read “a long article, that Donald Trump, being near the nuclear code would pose a danger to civilization.” That response just drew a simple “And you agree with that?” and re-statement of Clinton assertion that Trump would be a “threat to civilization,” that led to another rant from Clinton.

Not exactly an incisive questioning.

At the end of the interview clip, Rose’s colleague Gayle King effused: “She had a bring-it-on attitude, didn’t she?”

The following is the relevant portion of the interview aired on the July 19 edition of CBS This Morning:

CHARLIE ROSE: As we mentioned Hillary Clinton says she believed Donald Trump is the most dangerous presidential candidate in American history. I spoke with her yesterday in Cincinnati, after she addressed the annual NAACP convention. She said Trump lacks discipline and has, in her words, “no sense of history.”

HILLARY CLINTON: I think he has shown that he is dangerous. That he poses —

ROSE In what ways?

CLINTON: Well in several ways. When someone running for president says, in the most off-hand way, he doesn’t really care whether other countries get nuclear weapons, including Saudi Arabia.

CLINTON: Japan. But let’s focus on Saudi Arabia. We have done everything we can, Democratic and Republican administrations going back decades to try to prevent the proliferation of nuclear weapons. That casual indifference to the worst weapons that we have ever created in the world is dangerous. It’s either a lack of knowledge about what he’s saying means. Or, it’s an indifference to the power that he is seeking. And I saw in an article, a long article, that Donald Trump, being near the nuclear code would pose a danger to civilization. Now that’s not me.

ROSE: And you agree with that?

ROSE: Donald Trump with his finger on a nuclear bomb would be a threat to civilization?

CLINTON: He has no self-discipline. No self-control. No sense of history. No understanding of the limits of the kind of power that any president should impose upon himself. He has shown none of that. “Let’s return to torture. And you know what, I will order the American military to commit war crimes. Let’s pull out of NATO. We don’t need them.” What he has laid out is the most dangerous, reckless approach to being president that I think we’ve ever seen. And I say that knowing —

ROSE: The most dangerous man ever to run for president of the United States?

CLINTON: I believe that.