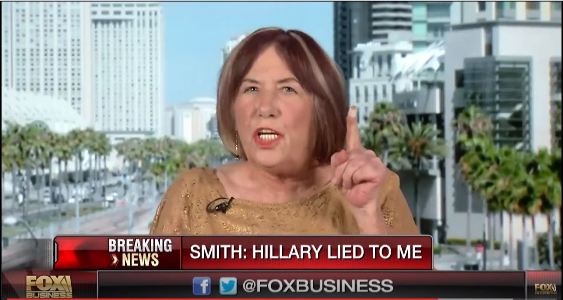 In a stunning moment Univision anchor Jorge Ramos, in the March 9 Democratic debate, actually played a clip of Patricia Smith and pressed Hillary Clinton to respond to the mother of Bengazhi victim Sean Smith.

The moment was stunning because while Fox News has pursued her story, the Big Three networks (ABC, CBS, NBC) have barely touched it. In fact, since 2012, ABC has yet to air a second of Smith’s claims that the former Secretary of State lied to her. In total, there have just been five stories (CBS 2, NBC 3, ABC 0) that contained Smith’s emotional pleas for answers.

In contrast, in the summer of 2005 when anti-Iraq war mom Cindy Sheehan camped out in front of George W. Bush’s Crawford, Texas ranch the networks flooded their evening and morning shows with 100 stories (ABC 37, NBC 33, CBS 30) in the first month (August 9 through September 9) of coverage alone.

In 2012, CBS ran two stories that contained Smith’s charges. On the October 11, 2012 CBS This Morning Margaret Brennan reported: “Investigators are still sorting through the paper trail. The account may continue to change. Late Wednesday the criticism got personal. The mother of one of the Americans killed, Sean Smith, says she is still searching for answers about how her only son died.” Brennan then aired a soundbite of Pat Smith demanding: “I have the right to know something, something, other than ‘oh, we’re checking up on it.’”

Then on the October 18, 2012 CBS This Morning, Ben Tracy relayed: “The mother of Sean Smith, who was also killed in the attack, added fuel to the fire when she told CNN’s Anderson Cooper that she does not trust what little the administration is telling her.” Tracy then played a Smith soundbite from the CNN program: “I look at TV and I see bloody handprints on walls, thinking, my God is that my son’s? I don’t know if he was shot. I don’t know - I don’t know. They haven’t told me anything. They are still studying it. And the things that they are telling me are just outright lies.”

NBC offered just three stories that relayed Smith’s criticism. On the June 17, 2014 NBC Nightly News, Andrea Mitchell reported: “Keeping the pressure on Hillary Clinton who can’t seem to shake the controversy. Tonight, criticized by the distraught mother of Sean Smith, one of the men who died in Benghazi.” Mitchell then ran the following Smith quote: “My son is dead. She can stand up and say “It was my fault. I blew it. I’m sorry. I blew it. I made the wrong decision.” And that’s what the kind of person I do not want to be President ever.”

Astoundingly, ABC has yet to air any of Smith’s critiques.

At the March 9 Democratic debate co-moderator Ramos pressed Clinton to respond to Smith, as seen in the following exchange:

JORGE RAMOS: I want to continue with the issue of trust. Secretary Clinton, on the night of the attacks in Benghazi, you are sent an e-mail to your daughter Chelsea saying that an al-Qaeda-like group was responsible for the killing of the Americans. [AUDIENCE BOOS] However some of the families claim you lied to them Here’s Patricia Smith, the mother of the information officer Sean Smith. Listen.

PATRICIA SMITH [on the Fox News Channel, 10/23/15]: Hillary and Obama and Panetta and Biden and Susan Rice all told me it was a video when they knew it was not the video and they said that they would call me and let me know what the outcome was.

RAMOS: Secretary Clinton, did you lie to them?

HILLARY CLINTON: You know, look, I feel a great deal of sympathy for the families of the four brave Americans that we lost at Benghazi, and I certainly can't even imagine the grief that she has for losing her son, but she's wrong. She's absolutely wrong. I and everybody in the administration, all the people she named, the President, the Vice President, Susan Rice, we were scrambling to get information that was changing literally by the hour and when we had information, we made it public but then sometimes we had to go back and say we have new information that contradicts it, so I testified for 11 hours.

On March 10, Smith responded to the Democratic frontrunner, when she was invited on Fox Business Network’s The Intelligence Report with Trish Regan.