Watch Out for Shenanigans! CNBC Debate Moderator's Most Biased Moments 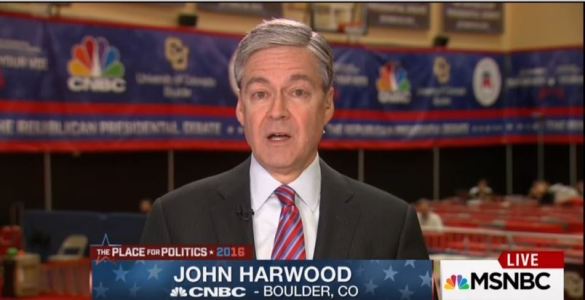 The RNC may regret its approval of John Harwood as lead moderator for Wednesday night’s GOP presidential debate on CNBC if past history is any guide. The CNBC anchor and New York Times columnist admitted he and a producer helped make Rick Perry’s infamous “oops” moment even worse. In a November 13, 2011 New York Times column Harwood bragged:

“As he [Perry] scoured his memory, awkwardness drifted into levity. Mr. Perry smiled; I chuckled along with the audience. When Mr. Romney helpfully offered, ‘E.P.A.?’ Mr. Perry repeated it with a joshing wave of his hand. Since our tasks as moderators included keeping the conversation moving, Maria began asking a new question. But our senior producer, who communicated with us throughout the debate through our earpieces, recognized the moment faster than we did. ‘DON’T STOP!’ the producer, Sandy Cannold, called out. So I asked whether the Environmental Protection Agency was in fact the third department on Mr. Perry’s list. He acknowledged that it wasn’t. When I offered him another chance, Mr. Perry glanced at notes but couldn’t find the answer (the Department of Energy).”

Harwood’s past takes on Republicans versus Democrats also reveal the potential for biased questioning at Wednesday night’s debate. A Harwood interview with Kentucky Senator Rand Paul was so one-sided it actually caused the Paul to press back: “Don’t you have something better to read than crap from people who don’t like me?” Harwood predicted Florida Senator Marco Rubio would look like a “schoolboy” compared to Hillary Clinton in a debate.

In contrast, he has sucked up to Barack Obama (he was actually impressed by Obama’s ability to swat a fly) and sounded like a House Democrat when he asked the President if he thought his re-election would “break the fever” of Republicans. Harwood also spun for Hillary Clinton as he sought to excuse her use of a personal email server while she was Secretary of State as merely “excessive caution” on her part.

The following are just some of Harwood’s most biased moments from the MRC’s archive:

Rubio Will Look “Like a Schoolboy” Compared to Hillary

Joe Kernen, co-host: “He [Marco Rubio] looks really young too.”
John Harwood: “Well, that’s the thing. I think – ”
Andrew Ross Sorkin, co-host: “Most voters are older.”
Harwood: “New generation – you know, fresh face, that – that has some appeal and some power and Rubio has that going for him. On the other hand, you put Marco Rubio up on a debate stage with Hillary Clinton, he looks like a schoolboy.”
— Exchange on CNBC’s Squawk Box, May 29, 2015.

Paul Pounds Harwood: “Don’t You Have Something Better to Read Than Crap From People Who Don't Like Me?”

John Harwood: “Well, let me read you something that The Economist, the political magazine, the British magazine wrote a few weeks ago and get you to react to it. ‘The only notable libertarian-leaning politicians to generate real excitement among conservative voters have risen to prominence through alliances with racist and nativist movements.’”
Rand Paul: “Don’t you have anything better, don't you have something better to read than a bunch of crap from people who don't like me? I mean, that won’t make for much of an interview if I have to sit through, you know, reading after recitation of people calling me a racist. I don’t accept all of that. I don’t really need to or spend the time going and talking about that. If want to talk about issues and what I stand for, I’m happy to, but I’m not going to really go through an interview reciting and responding to every yahoo in the world who wants to throw up a canard.”
— Exchange with Kentucky Republican Senator Rand Paul on NPR’s On Point, August 6, 2013.

Time for a Surgeon General Warning Against Profits?

“Should average Americans think about big Wall Street institutions the way that some have come to think about tobacco companies, that is, companies whose core activities are harmful to the country?”
— CNBC’s John Harwood to President Obama in an interview segment aired on NBC’s Today, April 20, 2010.

Awed that Obama Can Swat a Fly

Correspondent John Harwood: “He had this fly that was persistently buzzing around him....He swatted his hand and he said, ‘I got the sucker.’ He threw it onto the ground. It was a, you know, Dirty Harry ‘make my day’ moment” ...
MSNBC anchor David Shuster: “Amazing...An amazing interview....It never fails - great weather, rainbows, incredible speeches, and three-point basket. A fly and he nails it. Unbelievable. Unbelievable.”
— Exchange on MSNBC shortly after Harwood’s CNBC interview with President Obama concluded, June 16, 2009.

Hoping Obama Breaks the Tea Party “Fever” Within the GOP

“Before the election last year, you said you thought there was a possibility your re-election would break the fever within the Republican Party. Didn’t happen. Do you see this moment as a chance, through this political confrontation, to break the fever now?”
— Washington correspondent John Harwood interviewing President Obama on CNBC’s Closing Bell, October 2, 2013.

“The regulations on this have changed over time. The State Department indicated today that John Kerry was the first Secretary of State to use completely a official State Department email address. So this is something that’s been evolving and Hillary Clinton was serving during that evolution. But it is not 100 percent clear to me whether or not this was a clear violation or excessive caution on her part.”
— John Harwood on CNBC’s Closing Bell, March 3, 2015.

Erica Hill, co-host: “As we look at everything that’s happening in Washington, you look at this hearing, two parties, as we heard, two very different takes on that testimony yesterday. Is anyone going to be satisfied here?”
John Harwood: “I don’t think so. I think this is – what we’re seeing in the Petraeus scandal and the Benghazi issue being prolonged is an extension of some of the conflict and the bitterness that we had during the election campaign.”
— Exchange on NBC’s Today, November 17, 2012.

Host Gwen Ifill: “But Ed, why is this — why is this stuck? Why is this [Benghazi] a story that never went away?”
Washington Post’s Ed O’Keefe: “It never went away because House Republicans especially believed that there was always something more. And now that they have these emails, the fact that we’re talking about it at all, to them is a victory....The big problem, just real quick, is that now House Republican leadership is saying, despite their genuine concerns and interests in this, ‘Be careful. Don’t overreach. Don’t turn this into a Lewinsky-like scandal, where we begin to look ridiculous for doing some things and saying things. Let’s do a measured response.’”
CNBC’s John Harwood: “I think we’re already there.”
O’Keefe: “Well, some would say.”
— Exchange on PBS’s Washington Week, May 17, 2013.

Joe Kernen, co-host: “If you can’t figure out at this point that the public didn’t want this, [ObamaCare] John. Come on.”
John Harwood: “Joe, how much do you think the public knows about what’s in this health stuff.”
Kernen: “Don’t start talking down to the public - ‘the public doesn’t know what’s in there’ again, John.
Harwood: “They don’t.”
Kernen: “Well, if they don’t, it’s because it wasn’t done in an open setting and nobody knows what’s in it because it was all done behind closed doors.”
Harwood: “Joe, that is ridiculous.”
— Exchange on CNBC’s Squawk Box, January 22, 2010.

“So much of the commentary I’ve heard has been really idiotic. Liberals who want universal health care ought to be thanking Harry Reid for getting this thing done rather than talking about what’s inadequate in the bill. I’m not saying the bill is a good bill, but if you’re a liberal and you want universal coverage in this country and think that you could do better –  that Harry Reid can do better than what he’s done, or the White House can do better, they ought to lay off the hallucinogenic drugs because we have had a vivid demonstration of the limits of political possibilities on this issue.”
— John Harwood on MSNBC live coverage, December 21, 2009.

“He is not somebody who is infused with political correctness, the verbal equivalent of putting his pinky up when he opens his mouth. So this is what, the way ordinary voters are as well. They’re not always worried about sort of calibrating every single word by ‘ooh, is this racially insensitive?’ That’s something that Joe Biden brings as an asset to the ticket. The gaffes actually show one of his strengths.”
— MSNBC’s Morning Joe, August 23, 2008.