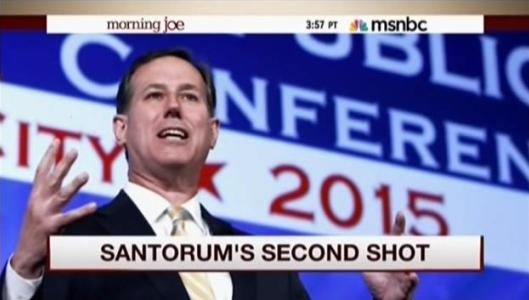 Social conservative-haters in the liberal media are sharpening their knives today as Rick Santorum is set to announce his 2016 presidential ambitions. From his arrival to the Senate in 1995 through his 2012 presidential run the media have attacked the former Pennsylvania Republican Senator as a “terrifying” “theocrat” who wants to impose a “Christian version of Sharia law.”

This is not surprising since journalists have admitted, in several surveys, to being far more liberal on social issues like abortion than even the general public. One such survey of journalists, from top media outlets, found that nearly all of the media elite (97 percent) agreed that “it is a woman’s right to decide whether or not to have an abortion,” and five out of six (84 percent) agreed strongly.” For more please visit the MRC’s Media Bias 101 page.

The following are the media’s worst attacks (so far) on Santorum from the MRC’s archives:

“Remember earlier in the campaign when Newt Gingrich was worrying everybody about Sharia law: the Muslims were going to impose Sharia law in America? Sometimes Santorum sounds like he’s creeping up on a Christian version of Sharia law.”
— Ex-New York Times Executive Editor Bill Keller, now a columnist for the paper, on MSNBC’s Morning Joe, Feb. 28, 2012.

“[Sen. Rick] Santorum’s theatrics make me gag. He may be sincere, but the show that he just put on, the clip we just saw of him wringing his hands about babies, make me think that it is theater. That may be unfair to him, but it seems excessive to me and a lot of this is just showboating on the floor.”
— Newsweek’s former Washington Bureau Chief Evan Thomas on the partial-birth abortion debate, May 17, 1997 Inside Washington.

“Most recently, the President’s reluctance to offend Senator Rick Santorum -- a Catholic theocrat who believes that states should have the power to arrest gay lovers in their bedrooms, or even to criminalize couples who use contraceptives -- was an occasion to wonder what, exactly, Mr. Bush was born-again into.” — Bill Keller, then New York Times Managing Editor, “God and George W. Bush,” May 17, 2003.

Lauer vs. ‘Ultra-Conservative’ Santorum: ‘Are You Barking Up the Right Tree?’

“For people who don’t remember, Senator, your time in the Senate, how would you describe yourself in terms of the political spectrum? Some have called you an ultra-conservative on social issues. Is that fair?”...In a recent NBC News/Wall Street Journal poll, 65 percent of people said they are most likely to vote for a candidate in 2012 who is strong on the economy, on the deficit, on jobs, not social issues. That’s not really what they are concerned about. So are you, are you barking up the right tree?”
— Co-host Matt Lauer on NBC’s Today, March 8, 2011.

Stupid Santorum Believes in That Work of Fiction: The Bible

“If a candidate for President said he believed that space aliens dwell among us, would that affect your willingness to vote for him?...Rick Perry, Michele Bachmann and Rick Santorum are all affiliated with fervid subsets of evangelical Christianity, which has raised concerns about their respect for the separation of church and state, not to mention the separation of fact and fiction.”
— Former New York Times Executive Editor Bill Keller in an August 28, 2011 column for the paper’s Sunday Magazine. The Times later issued a correction over Keller’s false statement that the Catholic Santorum is an evangelical Christian.

NBC Reporter to Santorum: Will Women Vote for You?

“At the same time, you have campaigned in Iowa tirelessly really tailoring your message to social conservatives in Iowa, but does that message, does your campaign have viability outside of Iowa, in New Hampshire, with mainstream voters?...The general election will come down to those  middle of the road voters - moderate, persuadable, independent voters. Many of them are women. Should Republicans sizing up your candidate today be concerned about this issue of electability should you be the nominee against Barack Obama?” — Questions posed from NBC’s Savannah Guthrie to Santorum on the December 29, 2011 NBC’s Today show.

“Is he against birth control legally? Does he talk about it’s okay to illegalize it, to ban it? Does he believe that?...He’s said, ‘My religion should dominate, should trump issues of the Constitution.’ He was saying, ‘Bill O’Reilly, you and I are of the same religion, therefore we should deny- we should deny a woman’s constitutional right to buy birth control or a male to buy birth control.’...And that’s what scares me. He thinks we should have a theocracy.” — Chris Matthews on MSNBC’s Hardball, January 5, 2012.

Matthews: No Way ‘Any Woman’ Votes for ‘Cro-Magnon’ Man Santorum

“[Foster Friess] is now representing a candidate, Santorum, who said it would be fine with him if states outlawed the sale of birth control. I mean, you’re talking about a guy from the Cro-Magnon era, in terms of politics...By the way, if any woman votes for Rick Santorum after that comment today by his number one spokesman, I will be surprised. I think, If he doesn’t fix this thing within a few hours, I’m talking to you Rick Santorum, if you don’t fix this in a couple hours, you can kiss off all the women voters in this country. And a lot of men.”— Chris Matthews on MSNBC’s Hardball, February 16, 2012

“When we last saw the Republican front-runner Rick Santorum speaking before a crowd yesterday, all we could think of was George Orwell’s novel 1984 about a society dominated by the most extreme form of totalitarianism....In reviewing his book, It Takes a Family, one critic said, ‘Mr. Santorum has one of the finest minds of the 13th century.’ But I’m not so sure. If you listen carefully to Rick Santorum, he sounds more like Stalin than Pope Innocent III.”— Martin Bashir on MSNBC’s Martin Bashir, February 14, 2012.

“The fact that you say that you think he might win the nomination completely terrifies me. I mean, how many decades back, how many centuries back does he want to take us? I read a little bit of his book this week, which is terrifying — logical, but terrifying — and there was a review of it, I think it was the Philadelphia Inquirer when it first came out and it said that Santorum would be a fine mind for the 13th century. And it’s kind of right. It’s logical, it’s natural law, it’s the kind of Catholic absolutist view of the world of several centuries ago.”
— The Economist’s Zanny Minton Beddoes on HBO’s Real Time with Bill Maher, February 10, 2012.