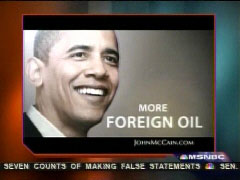 Barnicle did pull back a bit, as he asked if he was "overreacting," but his initial reaction to the ad was reminiscent of the New York Times' claiming the word, "Rats" popped up in a GOP ad back in 2000.

The following exchange occurred on the July 30 edition of "Hardball:"

MIKE BARNICLE: You know we sit here in living rooms and dens across America and these ads come beamed across and you sort of, half pay attention to them. I think a lot of people just half pay attention to 'em. But there's an element in that ad, right toward the end of the ad where it has Obama's face up and the word "foreign," next to it with "more foreign oil." There it is, it's right there on the screen now.

TODD HARRIS, FORMER MCCAIN SPOKESMAN: Well it's true! I mean you know, Obama he keeps saying no to every-, no to expanded nuclear, no to-

BARNICLE: Yeah but the "foreign," "foreign" deal. Obama is "foreign." 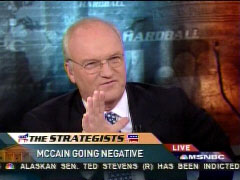 BARNICLE: I know, I know, but you know, you know?

HARRIS: Actually it should say "Yes to foreign oil," because that's his energy policy.

BARNICLE: Am I overreacting to that?

STEVE MCMAHON, DEMOCRATIC CONSULTANT: Well I don't think these things are coincidental. I do think, though, that Senator McCain has a choice to make here. He's gotta decide whether or not he wants to be the happy warrior or he's gotta decide whether or not he wants to be, run for grouch-in-chief. And the danger, when you're 72-years-old, when you're running a campaign that just seems like a grouchy old-man campaign is, is that, that's not what people want in a President. And it's not somebody who's offering a vision for the future. If you look at the two campaigns, Senator OBama is offering a hopeful, optimistic, aspirational vision for America's future and John McCain is running as Walter Matthau in Grumpy Old Men.