CNN Host and Crazed Professor Claim U.S. Democracy Is In a 'Precarious Situation'

Cabrera promoted Snyder’s book On Tyranny, in which he compared Trump to Hitler and claimed that Trump will take over the U.S. government through a Reichstag Fire type scheme.

Cabrera then cited a tweet from ex-Obama strategist and CNN contributor David Axelrod to enable Snyder to further fearmonger about American democracy:

CABRERA: I -- I want to read you what former Obama advisor, David Axelrod, had to say. He -- he says, quote, "If Donald Trump and Senator majority leader Mitch McConnell ram through a replacement now, the SCOTUS will have a majority of justices appointed by presidents who finished second in the popular vote, confirmed by Senate majorities who represented less than a half of the country. A tyranny of the minority." He uses that word "tyranny." Do you see it that way?

SNYDER: If I were the Republicans, I would be thinking the other way. I would be thinking, what is -- not only what is the right thing to do but what's the reaction going to be if, as you say, a president, who lost my three million votes, joined by Senators who represent a very small percentage of Americans, do something to affect the interpretation of the Constitution. A Constitution which -- which begins, of course, with the idea that the entire framework of American law comes from the people. We push ourselves too far away from that, we begin to have problems.

Snyder should refresh his knowledge on Constitutional history because the Founders designed the Senate to be a check against tyranny of the majority.

Cabrera then alleged that U.S. democracy is in a “precarious situation.” Snyder fed into her absurd statement and said that people “have to be ready to protest” if Joe Biden loses: 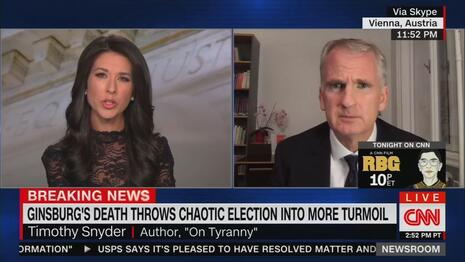 CABRERA: I think of all the uncertainty in the country right now. You just wrote a book on America's failures in responding to the coronavirus pandemic. But on top of that, the President has made some people doubt whether their vote will actually count and now we have this uncertainty on the Supreme Court. Just how precarious is our situation right now?

SNYDER: It's very precarious, but it's precarious in the ways that, you know, Ruth Bader Ginsburg was quite properly worried about in 2013. It's precarious in the ways that African-Americans have faced, you know, for the last hundred years and more. It's a situation where what citizens do matters much more than it usually does. We've only got a few weeks to this election and people have to vote and people have to be ready to protest. And people have to be ready to say it’s -- the government is in our hands, not in the hands of people who are trying to take our representative institutions away from us. So it's precarious, but we're also in a situation which can be met with success.

What is “precarious” is that Democratic academic hacks are calling for the left to not accept elections results that they don’t like.

CNN now has both an election and a Supreme Court nomination to win, so it will bring on as many far-left hacks as it can to scare people into voting Democrat.

This Democratic propaganda was brought to viewers by Resolve Pet Expert and Land Rover. Let them know here what you think about them sponsoring this content.