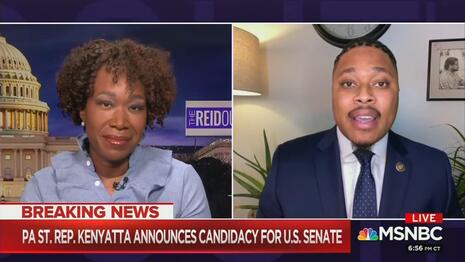 Shortly before a commercial break near the end of Thursday's ReidOut, MSNBC host Joy Reid teased an “exclusive” scoop about Democrats potentially acquiring another Senate seat in 2022. After the break, Reid conducted a softball interview with Pennsylvania State Representative Malcom Kenyatta , who announced on her show he was running to take Republican Pat Toomey’s seat in the United States Senate.

Earlier this year, Toomey announced that he would not be running for reelection, giving Democrats an additional opportunity to expand their control of the Senate. Reid, well aware of this, dedicated the penultimate segment of her show to fawning over, promoting, and coaching a candidate like this was a local Democrat Party meeting.

After Kenyatta announced his candidacy, Reid—barely able to contain her excitement—unabashedly responded:

“So, I know a lot of people are going to be excited about that. If you’ve seen my tweets about Representative Kenyatta, you know that I think you are a political star. Um, I mean, you just have a star quality and that is one of the things it does take in order to run—you have to have a certain amount of charisma.”

The identity-obsessed Reid, of course, gushed over Kenyatta’s ethnicity and his sexual preference, while perpetuating the same farcical narrative of Republican-led voter suppression of minorities.

Reid, apparently forgetting that she's supposed to be—or at least act like—a journalist on a cable-news channel, didn’t even ask Kenyatta what policies or ideas he is running on.

In fact, Kenyatta’s own campaign site fails to inform potential voters of what, exactly, he supports or stands for. It does, however, feature a two-minute video in which Kenyatta kisses his husband goodbye before bashing conservatives for dividing and destroying America.

Indeed, Kenyatta’s Twitter is much more revealing. Of course, his bio contains his preferred pronouns—which, like 99.4% of the American population, correspond with his ostensible biological sex. His Twitter also reveals that he is a proponent of the radical, riot-friendly Black Lives Matter movement. He also supports job-crushing climate change policies, and a $15 minimum wage. Reid didn’t ask about any of these things.

While it was demonstrable from Reid’s gushing over Kenyatta’s intersectionality during the interview that he’s her preferred choice for Toomey’s Senate seat, Reid concluded by assuring viewers that her show would feature Pennsylvania Lieutenant Governor John Fetterman, another Democratic Senate candidate, in the near future.

As long as someone on the left wins, Reid will be content.

Joy Reid’s inexorable advocacy for Democratic control of the United States Senate was brought to you, in part, by Amazon. You can contact this advertiser, and others, via the Conservatives Fight Back page, conveniently linked here.

JOY REID: And up next, a ReidOut exclusive! Okay, we have a big announcement that could flip a U.S. Senate seat from red to blue. Stay with us.

REID: Republicans have made it clear that they’re the party of Trump, Trump, and only Trump, and any dissent is forbidden. Take this Pennsylvania county chair explaining the desire to censure right-wing Republican Senator Pat Toomey who, despite supporting Trump with his votes for four years, voted to impeach him for fomenting the January 6th insurrection.

REID: Oh. Well, alrighty then. I'm joined now by Democratic Pennsylvania State Representative Malcolm Kenyatta. It’s always great to see you, Representative Kenyatta. First, I want to know what you think about the Republican Party in your state, and the state of it, but I understand you also have a little bit of an announcement that you want to make. So, I want to let you do that first.

MALCOM KENYATTA: So, Joy, always a pleasure to be with you. And I think what's clear from that clip and from everything we have been dealing with for the past four years is that America is really at a crossroads right now. I think that was made even more clear by what happened on January 6th. And the reality is that there is nothing written on a tablet somewhere that says America has to succeed. You know, America succeeds because every generation steps up to protect and expand the promise of America. A promise that has excluded, for too, long so many working families whose lives were tough prior to COVID, and this deadly pandemic has made those cracks even worse. And so, I know that we have an opportunity, right now, to expand that promise. To make sure that we have a country that doesn't just talk about justice and fairness for all, but that actually makes it real. And it's with faith in that mission and joy in my heart that I am announcing here, tonight, that I will be a candidate for the United States Senate to represent the great Commonwealth of Pennsylvania.

REID: So, I know a lot of people are going to be excited about that. If you’ve seen my tweets about, Representative Kenyatta, you know that I think you are a political star. Um, I mean, you just have a star quality and that is one of the things it does take in order to run—you have to have a certain amount of charisma. Uh, but you also do have to be able to beat some of the issues that Republicans and others have built into the system. Pat Toomey who, of course, didn't get elected with huge margins, right, but he was elected—some of these elections happen in mid-terms. And mid-terms are when you have lower voter turnout. They oscillate. You have really high turnout during presidential years and then it dips during, typically, it didn’t so much in 2018, but it tends to dip. There, you see Pat Toomey is not exactly a clear winner. But how do you get enough people to turn out, in a midterm, year in order to get to the top, in order to get that seat? It is not going to be him obviously on the ballot but whoever the Republican is.

KENYATTA: Well, thank God it is not going to be him on the ballot. And if he had chosen to run, we would have retired him either way. Let me say this; I think we have to do two things. The first thing we have to do is we have to have a message that resonates with working people. And not just a message that resonates with working people, but authentic messengers. You know, my first gig was at the age of 12, washing dishes to help my mom pay the bills. All the issues we are talking about, from raising minimum wage to student loan debt to clean energy and confronting the climate crisis, these issues are not hypothetical to me they are real. And I think that authenticity is going to matter because this is what Pennsylvanians are dealing with all across the Commonwealth. The second thing we have to do is really bring the band back together. Look at what we did when we delivered the state for Joe Biden and what we just did in Georgia with historic victories there. There was record turnout among young people, among African Americans, who, I like to remind people, don't just live just in Philadelphia and Pittsburgh but are all across the Commonwealth. And also, we saw turnout in the suburban counties where people recognize that the Republican Party has lost its way, and that we need leaders that are actually going to speak to the concerns that families are dealing with. Listen, this is not about a cult of personality. This is about building the biggest coalition, and already, my campaign has started to do that. You know, the American Federation of Teachers has already endorsed my campaign. The Working Families Party has already endorsed my campaign. And we are going to build a campaign that lifts up and centers working people with every single thing that we do. And so, listen, if folks believe we to have healthcare for everybody, that we should confront the climate crisis, that we should have a criminal-justice system that actually keeps us safe, then they should go to MalcolmKenyatta.com and find out what this campaign is about and join it because that's the type of campaign that we are going to build that's going to win this state, to take the slim majority we have right now in the Senate and get us to a big majority where we can deliver on bold things for the American people and so folks can go right to MalcolmKenyetta.com and figure out how to get engaged?

REID: Always stay marketing—you’re doing a good job. You have got to get people to know your website. You are in the state legislature right now, and we know Republican-rolled state legislatures are working really hard to suppress votes. To make it so that what you just talked about is very difficult to do. They are busy gerrymandering the state in their favor. That won't affect the state-wide race. But, what is your plan to counter-act that kind of voter suppression that you know is coming?

KENYATTA: Well, the plan is to do what we’ve been doing before. There are great organizations if you think about the judicial gerrymandering, which folks have been talking about trying to gerrymander the courts. Organizations like Why Courts Matter have been stepping up and taking that on. There are folks all across the Commonwealth who understand that the Republican Party has made it clear they are not going to run on a message that actually centers working people. They are not going to try to even convince working people that they are for them. Because they are clearly not. And so what they want to do is to try to shut voters up—to not let voters have a voice. And, you know, you look at the United States Senate. We have only elect eleven African Americans to the United States Senate.

KENYATTA: We have an opportunity, right now, to elect a 12th. And the way that we are going to do it is continue to push back—the way I’ve been fighting back against every attempt for them to disenfranchise Pennsylvanians—the last election cycle, we are going to continue to do it. I have introduced legislation to expand early voting, deal with the pre-canvas issue and make it so every single voter, irrespective of who they want to vote for, can be protected.

REID: Very quickly, we are out of time. Is your husband ready for this? Has he given you the a-okay, or did you have to have a big argument about whether or not it was time to hit the campaign trail? Because, you know, it’s a two-man job.

KENYATTA: No, he has given me the a-okay. He's excited. Dr. Matt is ready to go, and I think Pennsylvania is ready to go. They can go right to MalcolmKenyatta.com, Joy, to get involved.

REID: Darn it! I was going to say that if he didn’t like it, he could’ve leaked to me and I would’ve had like a really great scoop, but apparently I’m not going to get that scoop. Thank you very much, State Representative Malcolm Kenyatta, congratulat—uh, good luck, good luck on your race. By the way, we have invited Lieutenant Governor John Fetterman on this show. We look forward to having him on, as well, soon.