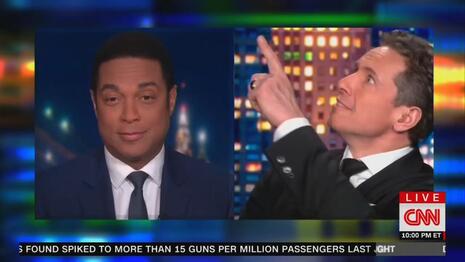 While transitioning from Cuomo Prime Time to CNN Tonight, and during their respective shows, Cuomo and Lemon raved over the Biden administration and the way it effectively sidestepped the legislative process by issuing four new executive actions that are geared toward promulgating “diversity” and “racial equity.”

“We now have a chance to speak truth and deal with reality,” exclaimed Cuomo in the final segment of his show. “We are not all equal here, we know this. The President knows this. Invoking George Floyd as he signed four executive actions, today, aimed at furthering racial equity."

Cuomo then went on to gush over the fact that Biden will have “the most diverse cabinet in U.S. history,” and championed the new administration's reversal and repeal of many of the previous administration’s accomplishments, such as the 1776 Commission.

During the handoff, Lemon chided the Trump administration and Trump supporters for “coddling people and not confronting them.” “You know what that got us?” Lemon asked indignantly. “That got us an authoritarian figure elected as president,” he concluded.

Got that? So despite the fact that Biden issued more executive orders in his first twenty-four hours in office than Trump did in his first two weeks of office, Trump is the “authoritarian figure,” not Biden, according to Lemon.

Lemon then criticized former President Obama, whom he simply referred to as “the black president,” for not issuing some sort of executive action pertaining to race relations:

Further perpetuating the idea that Trump supporters are tantamount to terrorists, Cuomo — who puts his name in every chyron subsequent to a commercial break, presumably, to remind his viewers who he is — used the Department of Homeland Security motto for reporting suspicious activity, “If you see something, say something,” to illustrate how to combat inequity and racism.

Of course, on Tuesday, neither Lemon nor Cuomo mentioned the general decline of racism in America or the various economic advancements minority communities experienced during the Trump administration.

The left purports to desire unity — but only for those who unreservedly back the ultra-woke agenda of the radical left.

The race-baiting and further stoking of racial tensions propagated by these two prime time hosts was sponsored, in part, by Liberty Mutual. You can contact this advertiser, and others, via the Conservatives Fight Back page conveniently linked here.

CHRIS CUOMO: We now have a chance to speak truth and deal with reality; we are not all equal here. We know that. The president knows this, invoking George Floyd as he signed four executive actions, today aimed at furthering racial equity.

[CUTS TO CLIPS OF PRESIDENT BIDEN]

CUOMO: Look at the faces on the people around him—they all know it was wrong. Biden’s executive actions, today, are aimed at housing, recommitting the government to lifting up Native-American communities, and combatting xenophobia against Asian Americans. It all matters. It’s all part of a more perfect Union. He’s pressing ahead with the most diverse cabinet in U.S. history. Equity and inclusion at the forefront in week one from disbanding the 1776 Commission and repealing the transgender military ban to ending the Muslim travel ban and strengthening DACA. Steps in the right direction. But this reckoning is going to take all of us—the president, too. He had that role in the 90’s crime bill. He had that handling of Anita Hill’s testimony. Yes, they were in his past, but they have to be recognized in his president—in his present, so he can be a better president. He’s vowing to build back better. How? We’ve got a lot of healing to do, a lot of building to do. Aspirations must be a coefficient of perspiration and inspiration that lead to action. We will be right back.

CUOMO: I have great wisdom for all of you. It came from my ten—almost eleven-year-old, Carolina. I wanna bring in the big show “CNN Tonight” with D. Lemon, its big star, right now.

CUOMO: Carolina said to me, “You are too negative and you always tell me what you think is wrong. You never ask me what I think is wrong.” And I thought—

CUOMO: I thought, you know what, she’s right, first of all about me as a lousy parent.

LEMON: You’re not a lousy parent.

CUOMO: Guilty. But as people, let other people tell you how they feel and what hurts and just listen. It can’t hurt you to listen. Great instruction from that kid. There’s another present for her birthday.

LEMON: I owe her fifty bucks.

LEMON: Well, then, that’s a good start. What we both think is wrong, uh, that video you showed of the president being asked about—
CUOMO: Former president!

LEMON: The former president being asked about systemic racism, and he “no there isn’t,” and everyone looking like what? But no one said anything, and that’s the problem. Don’t you think?

CUOMO: No, you’re right, but they were wrong. And you have to speak out. I know it's scary when somebody’s powerful. I know you want the job. I know there's a lot of shine on it. It's just not worth it, if at the end of the day you wind up becoming part of a stain on our society.

LEMON: It's not just a job, Chris. It's in friendship, it's in the workplace, it's in -- maybe someone's not your friend. It's in the line at the bank, it's at the supermarket, it's wherever you are. If someone says something that's racist or sexist or misogynistic or whatever—xenophobic—or whatever it is, anti-Semitic, then it's up to all of us to say “hey, stop, don't do that.” And not to coddle people and say “well, why would you do that?” and “I don't understand.” No. You know what coddling people and not confronting them—you know what that got us? That got us an authoritarian figure elected as president. Do you know what else that got us? An insurrection, a racist insurrection on the Capitol. You know what else that got us? That got us lawmakers in Washington trying to make excuses for that because of what? Coddling. Because people did not stand up for what's right. And so, whether this goes anywhere— and I think it will. This is a lot for the new president to put on the table, even if it’s just an executive order. Remember, I think the black president did not even do that. For him to do that, he's got to follow up on it. He's got to make good on it, or that's going to look really bad over the course of history and over the course of his presidency.

CUOMO: Yeah, because he doesn’t have ignorance as an excuse. And his agenda is supposed to be the opposite of what we just lived through.

CUOMO: Systemic inequality is real. Great. Do something about it.

LEMON: Call it out when you see it! Stop! Why did you do that? And wait for their answer.

CUOMO: See something, say something.

LEMON: And if you don’t have an answer, then you know something, right?

[CUTS TO CLIP OF PRESIDENT BIDEN]

LEMON: Finally! Finally, racial issues are a priority, not a political tool to use to bash America into submission. We have got a long, long way to go to undo hundreds of years of racism in this country. And four years, five, maybe, of legitimizing and prioritizing the wrong types of action and elements in this society. Racists, white supremacists, anti-Semites, prioritizing ignorance—racism that is not hiding, still painfully on display