On Sunday evening, America’s most notorious race-baiting reverend, Al Sharpton, used his MSNBC show to decry former President Trump’s 1776 Commission and the Republicans who support it as racist. During his “Gotcha!” segment on PoliticsNation, Sharpton dismissed the commission as “fake history,” while championing the New York Times’ 1619 Project — despite the fact that it was actually composed of both fake and fabricated history. Nonetheless, Sharpton rejoiced in the fact that the Biden administration scrapped the commission and “relegated it to the dustbin of history.”

If you’re unfamiliar with the 1619 Project, consider yourself lucky. It is one of the left’s more recent attempts at erasing and revising history in the name of social justice. Did you think that America’s founding, heralded by the Declaration of Independence, occurred on July 4, 1776? Well, you’re not just wrong; you’re also a racist! According to the 1619 Project, America was actually founded in 1619 when the first enslaved peoples were brought here from Africa. Thus, America was founded on slavery and oppression — not uncircumscribed opportunity and the idea of inalienable rights.

“The Times project drew upon a considerable amount of actual historical research,” exclaimed Sharpton. Except, it didn’t. In fact, NewsBusters’ very own Tim Graham highlighted several of these inaccuracies in a column last spring.

Leslie M. Harris, a historian of African-American life, was contacted by an editor at the New York Times and asked to assist in verifying information pertaining to the 1619 Project. In a piece for Politico, Harris described how she assiduously worked alongside the project’s creator, Nikole Hannah-Jones. However, according to Harris, Hannah-Jones often “ignored” her input and disregarded her historically based corrections.

Harris “vigorously disputed” this claim. “Although slavery was certainly an issue in the American Revolution, the protection of slavery was not one of the main reasons the 13 Colonies went to war,” she wrote in her Politico column.

Taking for granted the unprecedented bravery, intelligence, and dedication of our Founding Fathers, Sharpton foolishly asserted, “While most reasonable Americans could accept that earlier American leaders could be both geniuses and hypocrites, some conservatives wanted history to be more black and white — well, maybe just white.”

The 1776 Commission doesn’t strive to make history “more white,” its purpose is to exemplify the notion that America was founded on the belief that any person, from any place can succeed here if they simply adhere to, believe in, and respect American ideals and precepts.

Sharpton purports that the report “didn't even include one single historian among his authors.” Sharpton’s claim is misleading because the 1776 Commission doesn’t list any authors. There are, however, the names of the contributing members printed on the last page, which include several scholars such as military historian Victor David Hansen, Hillsdale College professor Matthew Spalding, and Hillsdale College president Larry P. Arnn. 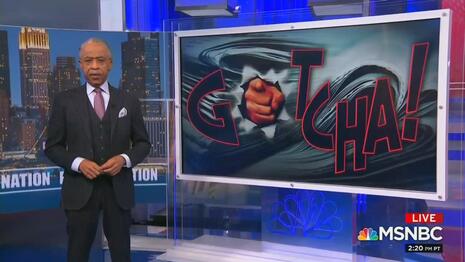 Sharpton went on to criticize former President Trump: “So the 1776 Commission was born on a day meant to honor Dr. King, at the behest of a man who, twelve days earlier, had encouraged a violent insurrection to overturn the votes of millions of African Americans…” He failed to mention, however, that the 1619 Project founder, Hannah-Jones justified looting and property damage.

The 1619 Project is antithetical to both America's founding and actual historical fact. It's predicated on divisive identity politics and victim status, rather than the principles of unity, freedom, and a sense of hope that the nation is based upon.

MSNBC’s race-baiting and denunciation of the true founding of the United States of America was brought to you, in part, by Advil. You can contact this advertiser, and others, via the Conservatives Fight Back page, linked here.

AL SHARPTON: For this week’s “Gotcha!” I’m going to give you a real history lesson about some fake history lesson. There are petulantly named 1776 Commission, and the Republicans who supported it. This Trump Administration dreamed up the commission as a clap back to The New York Times’ Pulitzer prize winning 1619 Project. Named for the first year enslaved Africans were brought to these shores. The Times project drew upon a considerable amount of actual historical research to point out that while our Founders were men who wrote soaring proclamations about freedom and equality, they also held other human beings in bondage, and that the birth of our country was inextricably linked to the institution slavery. While most reasonable Americans could accept that earlier American leaders could be both geniuses and hypocrites, some conservatives wanted history to be more black and white—well, maybe just white. So President Trump commissioned his own study to dispute the very concept of racism in America. And I'm sure you can imagine it didn't go well. Gallingly released on Martin Luther King Day, the so-called report was a mess from top to bottom. And didn't even include one single historian among his authors. A 40-page screed riddled with bad faith arguments and large parts of it were literally cut and pasted from contributors' early work, without any citation. It's hard to imagine anyone thought an effort this lazy was going to change the course of the historical research, but it certainly reflected the attitudes of the Trump Administration. In a farewell tweet last week, former Secretary of State Mike Pompeo claimed that, quote, wokism, multiculturalism, all the isms, they are not who America is, end of quote. Not exactly I Have a Dream. So the 1776 Commission was born on a day meant to honor Dr. King, at the behest of a man who, twelve days earlier, had encouraged a violent insurrection to overturn the votes of millions of African Americans and died unceremoniously just two days later, when Joe Biden was sworn in as president and the commission's report was removed from the White House website. Participants in the project say its findings will live on servers provided by the conservative Heritage Foundation. But you can be quite sure that when MLK Day rolls around next year, no one, not even Republicans, will be quoting from the 1776 Commission on its anniversary. Already, it has been relegated to the dustbin of history. But you can bet those former Trump supporters will once again be quoting Dr. King. This Monday, while Republicans who supported the 1776 Commission were tweeting out empty platitudes about Martin Luther king Jr., his daughter, Reverend Bernice, took them all to task, reminding them, quote, many who quote him now and evoke him to deter justice today would likely hate the authentic King. That's a historical truth that cannot be denied. I gotcha!