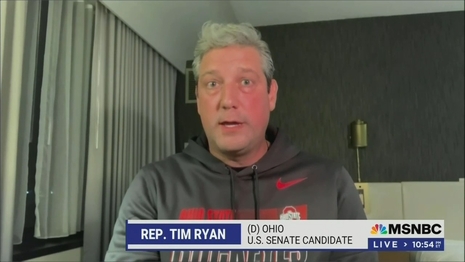 With the liberal media hellbent on saving their side’s majorities in Congress, the morning and evening newscasts of ABC, CBS, and NBC have yet to acknowledge what could be seen as a strike to the heart of Ryan’s campaign.

“Ryan, who has made his opponent’s questionable record fighting the opioid epidemic a central theme of his campaign...has received campaign donations over the years from drug distributors blamed for key roles in the crisis, an Associated Press review found,” Smyth began, adding that they came between 2007 and August 2022 from “from AmerisourceBergen, McKesson and Dublin, Ohio-based Cardinal Health, the three biggest drug distribution companies in the U.S.”

Smyth explained that, “earlier this year, the companies finalized a $21 billion settlement with state, local and Native American tribal governments and others over the toll of the opioid crisis.”

While $27,000 is a small sum compared to the $50 million career donations Ryan has received, Smyth argued the opioid donations “are notable as Ryan hammers the spotty record of the anti-opioid nonprofit started by his Republican opponent, ‘Hillbilly Elegy’ author JD Vance” even though Vance’s campaign hasn’t received any money from said industry.

Ryan’s campaign spokesperson called him “one of Congress’ most outspoken fighters against the opioid epidemic.” She noted that Cardinal is a major Ohio employer and the companies’ donations represent just one-fifth of 1% of the $17 million Ryan raised this quarter alone.

Vance’s nonprofit, Our Ohio Renewal, spent far more than that “for political polling and consultant fees to his top political advisor — when it wasn’t promoting a Purdue Pharma-linked doctor with a reputation for downplaying the deadly threat of OxyContin,” spokesperson Izzi Levy said.

The distributor most generous to Ryan was from Cardinal Health Inc., a multinational health care services company headquartered in his home state. The company’s PAC has given him $21,000 since 2007, including $5,000 this August. McKesson Corp. Employees PAC gave Ryan $5,000 in 2012. Amerisource Bergen Corp. PAC gave him $1,000 in 2019. The opioid crisis was ongoing during all those years.

Smyth went onto say that Ryan’s team has maintained their boss has “had helped bring funding to health care providers and law enforcement officials working to fight opioids and had worked to expand access to treatment for residents with substance abuse issues” despite a mixed voting record on bills to fight the epidemic that’s left nearly a half million people dead.

Early Wednesday evening on the Fox News Channel, Special Report’s Bret Baier had a 32-second brief on the AP story:

Ohio Democratic Senate candidate Tim Ryan is facing criticism tonight over donations he accepted from drug distributers blamed for their roles in the opioid crisis. Congressman Ryan is running against Republican J.D. Vance and has made his opponent's record on fighting the epidemic a central theme of his campaign — hitting Vance on that issue. An Associated Press review found three companies donated a combined $27,000 to the Democrat Ryan between 2007 and August of this year.

It also came up a few hours later to the tune of 13 seconds when Vance alluded to it with host Sean Hannity:

And it came out today, Sean, that he's helping — he's being funded — if you're in Ohio, you see a TV commercial, it's being funded by some of the companies that help caused the opioid problem. This is the kind of guy that Tim Ryan is.

So with roughly 27 minutes of airtime devoted to the abortion claim against Georgia Republican senatorial candidate Herschel Walker and zero time on the radical abortion policies of key Senate Democratic candidates, the networks have made their priorities clear: defend liberals at all costs.