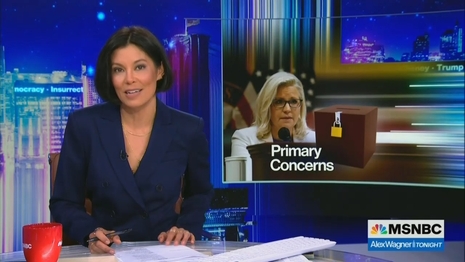 On Tuesday, far-left pundit Alex Wagner made her formal return to MSNBC with her new primetime show Alex Wagner Tonight that will air Tuesday through Friday nights in place of mainstay Rachel Maddow (whose new contract allows her to keep her slot on Mondays). According to Nielsen Media Research, it struggled in comparison to the Fox News Channel with a lowly 183,000 views in the key 25-54 demo compared to 404,000 for FNC’s Hannity.

While Hannity tripled CNN Tonight’s 866,000 total viewers and 176,000 in the demo, Wagner did manage to blow CNN out of the water and was MSNBC’s top-rated show for the day in both metrics.

However, given the state of CNN and how the 9:00 p.m. Eastern hour is being helmed by a series of rotating anchors (with weekday afternoon CNN Newsroom host Alisyn Camerota at the desk this week), that’s not exactly saying much.

But on the other hand, Alex Wagner Tonight finished behind seven FNC shows in total viewers and then 13 FNC shows and two CNN shows in the demo.

As our Geoff Dickens wrote on Monday, Wagner has a long history of bias at both MSNBC as a fill-in host and failed host of her midday show Now with Alex Wagner and at Showtime as co-host of The Circus.

Our Tim Graham also had a story this week about Wagner in which she told Deadline that her show will be focusing on “dismantl[ing] or at least undercut[ting]” right-wing lies.

Over at The Washington Post, Jeremy Barr seemed to be enthused by Wagner’s show and allowed her to insist she’s still “a journalist” even though “Wagner leans left on many issues.”