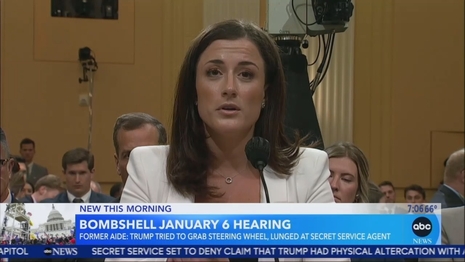 With the liberal media all-in on Tuesday’s January 6 Committee hearing featuring former White House aide Cassidy Hutchinson, it wasn’t a surprise Wednesday morning to see the “big three” networks of ABC, CBS, and NBC downplay the strong pushback from the Secret Service regarding Hutchinson’s tall tale that President Trump assaulted a Secret Service agent and tried to seize the steering wheel of his presidential SUV on January 6.

A NewsBusters analysis found that ABC’s Good Morning America (GMA), CBS Mornings, and NBC’s Today spent four minutes and 42 seconds on Hutchinson’s claim, but only two minutes and 33 seconds on the pushback from her colleagues and the Secret Service, including offers from the latter to have the agents involved testify under oath that none of that was true.

As usual, we excluded the teases from time counts.

Weekend co-host Whit Johnson trumpeted that Hutchinson told the House committee “that the former President at one point lunged at a Secret Service agent, grabbing the steering wheel of his vehicle when they wouldn't take him to the Capitol.”

Senior White House correspondent Mary Bruce did the same, including this portion touting Hutchinson’s claim about the assault and lunge as if they were facts (click “expand”):

MARY BRUCE: When he finished speaking and got in the motorcade, she says Trump expected to join his supporters. But Hutchinson says lead Secret Service agent Robert Engel refused saying it wasn't safe. Hutchinson says she saw Engel and deputy chief of staff Tony Ornato shortly after they returned to the White House, describing Engel as looking discombobulated and lost.

CASSIDY HUTCHINSON: The President said something to the effect of, “I'm the f-ing President, take me up to the Capitol now” to which Bobby responded, “sir, we have to go back to the West Wing.” The President reached up towards the front of the vehicle to grab at the steering wheel. Mr. Engel grabbed his arm, said, “sir, you need to take your hand off the steering wheel. We're going back to the West Wing. We're not going to the Capitol.” Mr. Trump then used his free hand to lunge towards Bobby Engel and when Mr. Ornato had recounted the story to me, he had motioned towards his clavicles.

BRUCE: Hutchinson said it wasn't the first time the President exploded in rage[.]

It would take a minute and a half for the other side to be presented, starting with the vague notion that “we are hearing from some members of Trump's inner circle who are disputing” some of what Hutchinson said.

The show then pivoted to a 50-second live shot with Justice correspondent Pierre Thomas covering the possible inaccuracies, telling of how not only has the Secret Service said in a statement that their agents would testify under oath, but “[a] source close to the Secret Service tells me that President Trump was apparently not happy with the answer but the agents in the car would push back against any allegation of an assault by President Trump and the allegation that he reached for the steering wheel.”

The show’s second hour had yet another hearing segment, but it featured only 27 seconds on the steering wheel tale, but nothing on doubts surrounding its accuracy.

CBS Mornings had January 6-obsessed congressional correspondent Scott MacFarlane do the honors, starting his report with a fuzzy allusion to “new information this morning about one of the most explosive allegations.”

What was it? Well, it took over a minute for that to be explained and only after MacFarlane said “Hutchinson testified Trump also wanted to go to the Capitol, which she described being told led to an altercation in the presidential limo when his chief Secret Service agent Bobby Engel refused for security reasons.”

Only after a lengthy Hutchinson soundbite did MacFarlane footnote the fact that “[a] source close to the secret service tells CBS News Engel and the driver are prepared to testify Trump never lunged for the steering wheel and that neither of them were attacked.”

Though he wouldn’t allude to the questions about whether this incident happened, chief political analyst John Dickerson seemed to defend Hutchinson in abstract terms, saying “recollections can vary, and it's the committee's job and all of our job to make sure that whatever Cassidy Hutchinson said lines up with what — with other testimony.”

“[Y]ou can imagine it might be hard to remember the precision of that day, although she had notes and so forth else, when it was pretty hectic inside the White House,” he added.

NBC News was the first to report the Secret Service’s denials and offer to go under oath to say so, but that didn’t stop Today from spending well over twice as much time peddling this steering wheel episode as they did saying it’s dubious at best.

Co-host Savannah Guthrie swooned that Hutchinson’s “words reverberat[ed] across the country,” including her claim that Trump “[took] aim at his own lead Secret Service agent Bobby Engel inside the presidential SUV.”

68 seconds later after a Hutchinson soundbite of the tale in question, Guthrie explained that not only has Trump “disput[ed] that,” but the Secret Service has “as well.”

Only later in chief White House correspondent Peter Alexander’s report did he balance 10 seconds on the claim and 25 seconds on the pushback (click “expand”):

But another explosive moment now being disputed by some close to the Secret Service after those allegations from Hutchinson, that Mr. Trump, furious he was not being driven to the Capitol, tried to grab the steering wheel and lunged toward his lead agent, Bobby Engel. A source close to the Secret Service tells NBC News both Engel and the SUV driver are prepared to testify under oath, disputing that Mr. Trump ever assaulted any agent or tried to grab the wheel.

Hutchinson's lawyer says she “testified, under oath...recount[ing] what she was told” and “those with knowledge of” that “episode...should” do the same. Hutchinson says she first heard of plans for President Trump to make an unannounced trip to the capitol from Rudy Giuliani days before January 6th.

To NBC’s credit, Alexander and Guthrie would pour cold water on their fellow leftists hoping Hutchinson’s testimony would be a lynchpin to a hypothetical criminal trial against Trump with Guthrie noting a lot of what she said “would likely not be admissible in a court of law” because “[i]t’s hearsay.”

Alexander was more tilted in the second hour with 35 seconds hyping Hutchinson’s “explosive testimony” detailing “a dramatic confrontation inside that presidential SUV” even though “a source close to both” agents reject the notion “that Mr. Trump ever tried to grab the wheel or get physical.”

The liberal media have harped on the January 6 Committee and its members as harbingers of truth. But if they’re unwilling to firmly call out and push to correct the record on a claim that’s on rapidly thinning ice, it should serve as a reminder that they continue to suffer from Trump Derangement Syndrome (TDS).

Wednesday morning’s slanted coverage was made possible thanks to advertisers such as Citi (on NBC), IHOP (on ABC), and Progressive (on CBS). Follow the links to see their contact information at the MRC’s Conservatives Fight Back page.

To see the relevant transcripts from June 29, click here (for ABC), here (for CBS), and here (for NBC).