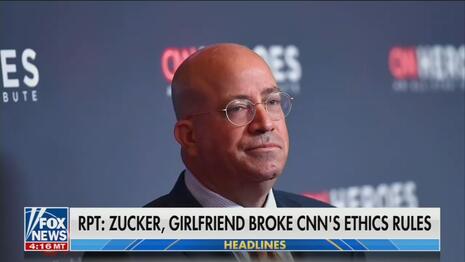 Through a series of stories this week, it was evident CNN’s current staff have no interest in being salvaged as a serious news organization and anything other than a far-left propaganda outlet worthy of being some combination of mocked and ignored. Instead of seeking to move on from their disgraced former boss Jeff Zucker after his Wednesday ouster, they’ve tried to canonize him as a tent pole of American democracy.

This was despite increasing evidence from outlets such as the New York Post and Rolling Stone that, for example, Zucker colluded with his lover/colleague Allison Gollust and former Prime Time host Chris Cuomo to assist Cuomo’s brother Andrew while he was the Democratic governor of New York.

The Post’s Emily Smith and Theo Wayt reported Thursday afternoon that Gollust and Zucker “personally call[ed] him to do news segments...and even coaching him on what to say during his infamous COVID briefings” with a source emphasizing they told Andrew “how to hit back at [President Donald] Trump to make it more compelling TV.”

Smith and Wayt added that Gollust “leaned on her ‘good relationship’” as she previously worked for the governor.

Incredibly, CNN not only largely confirmed it, but insisted “[b]ooking newsmakers on television is always extremely competitive...and an all-hands-on-deck endeavour.”

Over at Rolling Stone, reporter Tatiana Siegel said that collusion has garnered growing attention in the outside investigation of Chris Cuomo’s time at CNN. Siegel also blew up the farcical claim about the timeline Zucker and Gollust gave about their romantic relationship as she insisted it goes back 26 years (click “expand”):

In relationships, timing is everything. And the timeline on Jeff Zucker and Allison Gollust’s coupledom is not only off by more than two decades, say sources who have worked with the pair — the CNN power couple also repeatedly lied about their relationship to their corporate bosses.

The scope of the investigation has now expanded to include Zucker and Gollust’s relationship with Andrew Cuomo, too, a WarnerMedia source acknowledged.

But sources who worked closely with Zucker and Gollust dating back to their days at The Today Show in the mid-Nineties dispute their statements in the memo. In reality, these sources tell Rolling Stone, Zucker became romantically entangled with Gollust back in 1996, when she was a trainee in NBC’s corporate communications group and he was the married executive producer of The Today Show. “It was the worst-kept secret, but Jeff was seen as untouchable,” says one insider. “And their statements [in the memo] are total bullshit.”

In fact, the pair have skirted the issue multiple times in the past, and at least one investigation into their relationship had been carried out by WarnerMedia well before Covid.

The source says the investigation suggests Zucker and Gollust were advising the governor at the beginning of the Covid pandemic in ways not dissimilar to what led to Chris Cuomo’s dismissal. As Andrew sparred on a daily basis with then-President Trump over Covid messaging, the couple provided the governor with talking points on how to respond to the president’s criticisms of the New York crisis. They also booked the governor to appear on the network exclusively, which became a ratings boon for CNN, with Chris Cuomo doing the interviewing. Cuomo and Gollust’s conduct, too, would appear to mark an ethical breach for executives acting on behalf of an impartial news outlet.

Over the past three decades, the Zucker-Gollust relationship was no secret inside the newsrooms of NBC or CNN. Within a year of Zucker and Gollust commencing their affair, multiple sources say, Gollust leapfrogged from trainee to the role of senior publicist for Today, and Zucker became her boss, a paradigm that continued for years to come with only two brief interruptions. Through a series of promotions, her purview expanded, and she added oversight duties for NBC News, MSNBC, CNBC, and the Weather Channel as well as NBC Nightly News, Dateline, and Meet the Press.

Siegel emphasized Zucker had even picked Gollust to succeed him as the head of CNN, but the Chris Cuomo probe destroyed their “well-laid plans” with the introduction of “emails and other ‘evidence.’”

Despite all of that, the Zuckerville cult has continued unabated. Vanity Fair’s Joe Pompeo said special correspondent Jamie Gangel protested the removal of her longtime friend, telling WarnerMedia CEO Jason Kilar that members of Congress (including some on the January 6 committee) told her they were “devastated for our democracy” and troubled that he won’t “be around to make sure that CNN is able to do its job.”

She added that “the company has made a terrible mistake” and WarnerMedia bosses didn’t grasp “what you’ve done to this organization, and to our coverage, and to all the people who worked for him.”

Try and convince us that this isn’t a cult.

Unfortunately, things got even more fanatical with a story by Puck News's Dylan Byers.

A former CNN Media reporter, Byers obtained audio of the meeting that he said described “anger...regarding...[Zucker’s] sudden defenstration” with D.C. bureau employees “at a loss to understand how the network will function” without Zucker since he was “involved in nearly every aspect of the network’s programming.”

To underline the level in which Zucker was some combination of puppetmaster and hand-holder for these sheep, he quoted chief political correspondent Dana Bash as having said “the punishment didn’t fit the crime” and it went against Zucker’s morals in giving people “a second chance.” 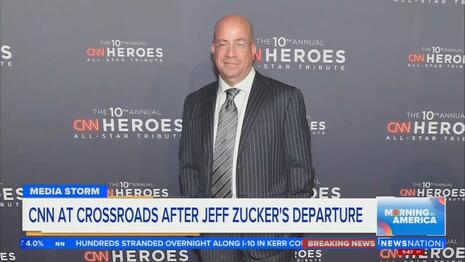 Without a sense of irony for how CNN has shown nothing but hate in seeking to treat conservatives as enemies of the state, chief political analyst Gloria Borger lamented Zucker wasn’t given “a lot of dignity” with Kasie Hunt fretting the Zucker news will cloud the launch of CNN+.

Talking about what we do every day, Jeff is a very critical part of that. If you listen to the 9 a.m. calls, if you talk to anybody in this room, producers, people in the control room, that’s how they feel.

Someone get these people fainting couches.

Moments later, CNN’s lead Washington anchor, Jake Tapper, addressed the elephant in the room: the lawsuit that CNN’s disgraced former anchor Chris Cuomo had brought against the network in an effort to get the severance that Zucker had denied him when he was fired in December.

Tapper: “Jason, if you could address the perception that Chris Cuomo gets fired by CNN, Chris Cuomo hires a high-powered lawyer who has a scorched-earth policy, who then makes it very clear to the world that unless Jeff gives Chris Cuomo his money, they’re going to blow the place up. Stuff starts getting leaked to gossip websites about Jeff and Allison… and then weeks later, Jeff comes forward, discloses this and resigns—not willingly. An outside observer might say, ‘Wow, it looks like Chris Cuomo succeeded. He threatened, Jeff said we don’t negotiate with terrorists, and he blew the place up.’ How do we get past that perception, that this is the bad guy winning?”

CNN’s chief national security correspondent, Jim Sciutto, turned his attention to the most pressing question for CNN journalists and producers in terms of their day-to-day jobs: “We have a war brewing in Europe, and we have midterm elections coming up, and of course Jeff was involved in a whole host of decisions… so, starting tomorrow, where are we going to get that direction?”

With that, we ask: How old are these people?

Though to no avail, one of CNN’s interim leaders said they wouldn’t be changing “Jeff’s strategy” and striving to “to honor him.”

And on Gollust, he added new information about her likely future (click “expand”):

Veteran Washington correspondent Jim Acosta, who at one point had his White House press credentials revoked, expressed concern that a manager without Zucker’s toughness might have relented to the pressure.

“If we had not had Jeff here during the Trump administration, we would have probably been taken out and you would have something like Fox News lite on the air right now,” Acosta said. “It’s a rather delicate time, not just for this country but this business.”

Washington anchor Jake Tapper said the network would have become “benign, vanilla gruel” if not for Zucker’s leadership.

While Gollust remains employed by CNN, several people familiar with her status who were not authorized to discuss it publicly said she will likely not stay with the company once Discovery’s merger with WarnerMedia is completed in a few months.