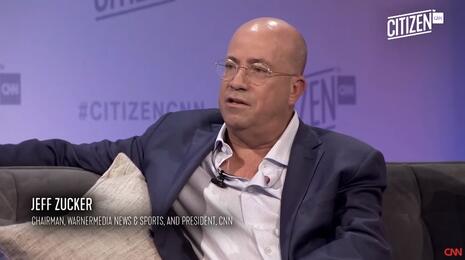 On Wednesday morning, CNN president, longtime overlord, and puppetmaster Jeff Zucker resigned effective immediately from the failing, far-left network after nine years over what he called “a consensual relationship with my closest colleague” with fellow CNN executive Allison Gollust that he had failed “to disclose...when it began.”

In an email to CNN employees, Zucker claimed the revelation came about “[a]s part of the investigation into Chris Cuomo’s tenure at CNN” though, as folks like former CNN employees Steve Krakauer and Soledad O'Brien tweeted, it was more like a long-held open secret.

Zucker also wrote that he and the network “had nine great years” together and lamented that “wish[ed] my tenure here had ended differently.”

For her part, Gollust — who’s staying with CNN and remaining executive vice president and chief marketing officer — said in a statement that they had “been close friends and professional partners for over 20 years” and their “relationship changed during Covid,” adding that she “regret[s] that we didn’t disclose it at the right time.”

It remains to be seen who will take over the network (which has lost ratings battles to the likes of a Hallmark movie, Moonshiners, My 600 Pound Life, and Pepa Pig) in this surprising move ahead of its merger with Discovery but, almost a year ago, former CNN media reporter Dylan Byers reported Gollust was a frontrunner.

Numerous tabloid reports took notice of Zucker’s coziness with Gollust. In April 2017, the New York Post’s Page Six team reported on a heated argument between the two at an event that one source said came across “like she was reprimanding her husband or something.”

In January, Radar cited “multiple sources” in claiming the two had “been involved in a clandestine romance dating back years.” The story was quickly picked up by OK! Magazine.

Radar also noted that Gollust had previous worked for Chris Cuomo’s brother and disgraced former Democratic Governor Andrew Cuomo (NY) and that, along with their affair, could have been “why Zucker initially protected the embattled brothers.”

Both Gollust and Zucker were previously, but both have since split with Zucker splitting with his wife in 2018.

To further add to the creepiness, Katie Couric said this in her recent memoir about the two, citing an ordeal in 2011 when they were at ABC for a failed daytime talk show (click “expand,” emphasis mine):

It was a little weird. With the TODAY show, I just kind of came on, and people responded. Here, there was product-testing. It didn’t feel organic. At a certain point Jeff made a huge push to bring on Allison Gollust. When we worked together at NBC, she and Jeff cooked up ever bolder ways to draw attention to TODAY and later to Jeff himself when he moved to Entertainment. They were joined at the hip. The problem was, we’d already hired a PR person for the show. There really wasn’t a role for Allison.

I had to wonder why Jeff was angling so hard to bring Allison on board. She and her husband and kids had moved into the apartment right above Jeff and Caryn’s—everyone who heard about the cozy arrangement thought it was super-strange. By that point, Caryn had become a close friend of mine and it made me feel really uncomfortable.

“Will you do me a favor, he said, sounding uncharacteristically needy. “Will you call Jeff Bewkes”—then CEO of Time Warner—“and put in a good word for me at CNN? This is really my last chance to have a big job like this. And of course, if you want it, there will be a job for you too.”

Of course I would, I told him.

Oh, and I never did hear from him about that job.

Tell us again, Jeff, how there was no there there until the pandemic.

According to The New York Times, Zucker’s resignation also includes a departure from CNN’s parent company WarnerMedia, where he had been the chairman of their news and sports departments.

Given CNN's recent track record of alleged and verified allegations of sexual misconduct, one could give them a new slogan offered up by NewsBusters deputy managing editor Nick Fondacaro: This is CNN, the most pervy name in news.

To see the full transcript of Zucker’s message, click “expand.”

As part of the investigation into Chris Cuomo’s tenure at CNN, I was asked about a consensual relationship with my closest colleague, someone I have worked with for more than 20 years. I acknowledged the relationship evolved in recent years. I was required to disclose it when it began but I didn’t. I was wrong.

As a result, I am resigning today.

I came to CNN on January 28, 2013. Together, we had nine great years. I certainly wish my tenure here had ended differently. But it was an amazing run. And I loved every minute.

I am grateful to the thousands of incredibly talented CNN and Turner Sports employees who helped make this such a joy for me, and such a success for all of us. I wish each of you nothing but the best in the years ahead.

With gratitude and much love.

Stay tuned to NewsBusters for more on this breaking story.