Former Bush official-turned-liberal-turned-ABC News chief political analyst-turned-special correspondent Matthew Dowd found himself in hot water on Wednesday after the first set of impeachment hearings, tweeting a sexist attack against Congresswoman Elise Stefanik (R-NY). Why? Well, it turned out he didn’t like her questioning.

And taking a page out of the Hillary Clinton playbook, Dowd’s apologies amounted to him expressing dismay and apologized that people thought that he was being sexist when, in his mind, he wasn’t. 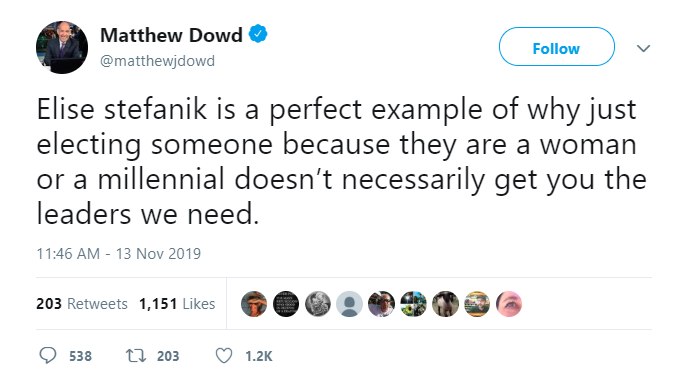 The tweet was immediately met with harsh scrutiny. Stefanik’s colleague and Congressman Mark Meadows (R-NC) hit back: “Elise did a great job laying out the facts. And, not least of all, this comment is reprehensible.” 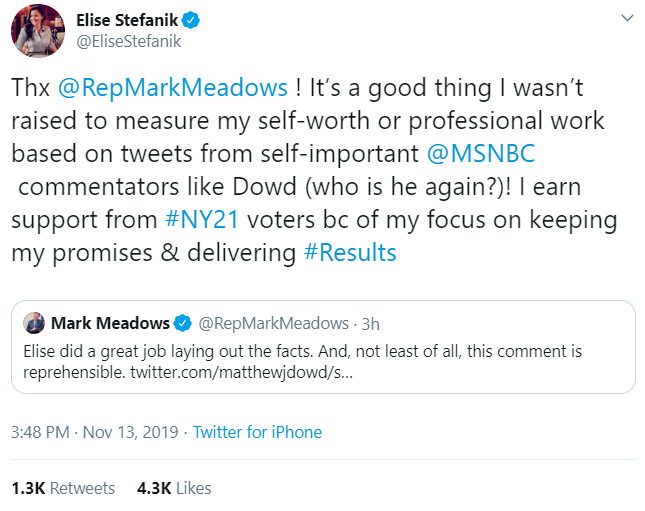 The blowback continued on for a few hours until Dowd offered the first of three cowardly tweets. In the first, he refused to accept blame and instead pinned it on those questioning him: “I think people are misunderstand my tweet.  So I will delete. I am saying just saying we need more millennials or more women isn’t going to solve the problem of needing more leaders with integrity.  Vote integrity no matter what.”

Ever so slightly, Dowd copped to what he originally said, but remained half-baked in his two other tweets in which he supposedly apologized: 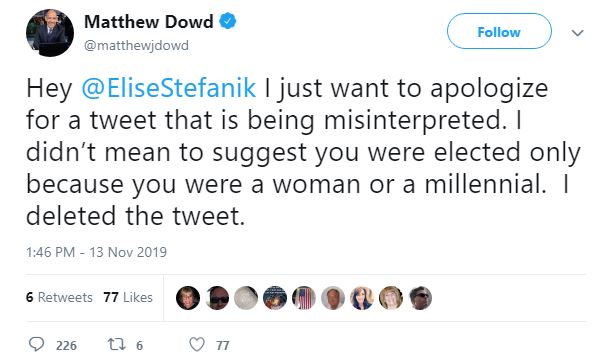 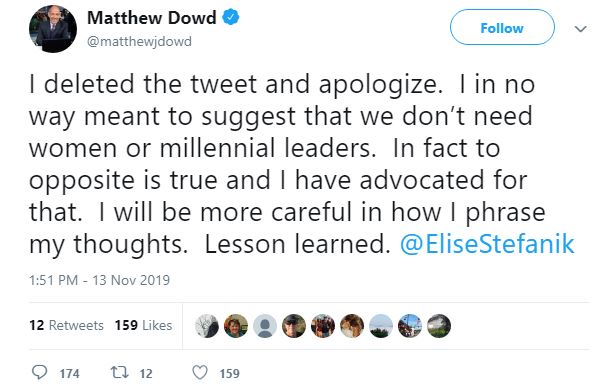 Dowd then showed how insincere he was by going on a retweeting spree of Twitter users who were singing his praises for his handling of the kerfuffle, insisting that he was sincere and remained a great champion of women....or something.

Stefanik did tweet an acceptance of Dowd’s mea culpas: “Apology accepted @matthewjdowd - @ABCPolitics should be ashamed of your comment. This is one of the reasons young women don’t run for office.”

Watch for Dowd to not suffer any punishment or face any scorn from the liberal media janitors at CNN because, to put it simply, Dowd isn’t a conservative or someone who works for Fox News.

And besides, his bosses are the same people who chose to side with Jeffrey Epstein, the Royal Family, and the Clintons over underage girls in quashing Amy Robach’s efforts to blow the whistle on Epstein’s alleged horrors.